Amazon is cutting more than 18,000 jobs as it becomes the latest technology giant to axe staff amid economic turmoil and fragile investor confidence.

Boss Andy Jassy told employees the biggest cull in its history was required following rampant hiring during the pandemic.

‘Companies that last a long time go through different phases. They’re not in heavy people expansion mode every year,’ Jassy said. ‘This year’s review has been more difficult given the uncertain economy and that we’ve hired rapidly over the last several years.’

Tech stalwart: Amazon, founded by Jeff Bezos (pictured with girlfriend Lauren Sanchez) joined a list of companies that are saying they over-hired during the pandemic

The news sparked fears over jobs in the UK where around 70,000 of Amazon’s 1.5m global workforce are based.

The cuts were announced just hours after workers at its Coventry warehouse named a date for the first walkout by Amazon staff in the UK, interrupting parcel distribution for the end of this month.

The GMB union said the workers, who are taking action over pay, are set to make history on January 25.

But few were shocked by the cuts, affecting several teams across Europe, which have become common in Silicon Valley. 2

According to tracking site Layoffs.fyi, the tech industry shed more than 150,000 workers in 2022, with the trend showing no signs of waning.

This week Salesforce said it would axe about 10 per cent of staff, or 8,000 jobs, citing similar pandemic-induced woes as its San Francisco-based neighbours.

The software giant joined a list of companies that are saying they over-hired during the pandemic and are subsequently underperforming.

‘As our revenue accelerated through the pandemic, we hired too many people leading into this economic downturn we’re now facing, and I take responsibility for that,’ chief executive Marc Benioff told staff.

So, with the IMF forecasting that a third of the world economy will fall into a recession this year, companies will continue to push leaner projects and even tighter budgets to make it through the rough. 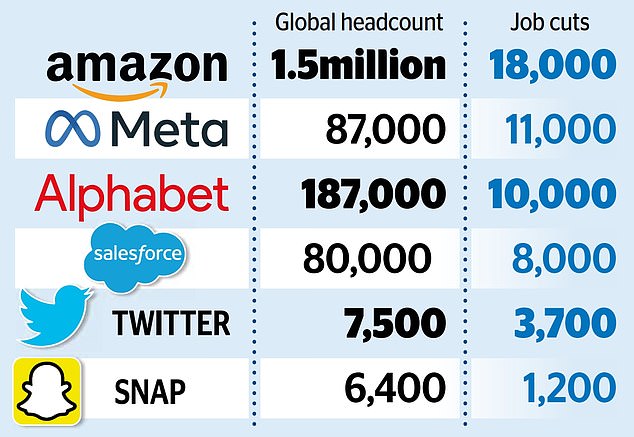 Hargreaves Lansdown investment analyst Susannah Streeter reckons the hardest-hit are likely to be companies whose successes are more inextricably linked to advertising.

Marketing insight firm WARC says although ad spend is set to grow, it will be much slower, with more firms fighting for less money.

Combined with the rise of Chinese social media powerhouse TikTok, which has more than 1bn users, it’s a recipe for disaster for the likes of Facebook owner Meta and Snapchat.

Both have culled 11 per cent and 20 per cent of their respective headcounts to prepare for the rough ride ahead.

Facebook owner Mark Zuckerberg apologised to staff in November for his decision-making, stating that increased competition had caused revenue to be much lower than expected. ‘I got this wrong,’ he wrote.

The flip side, Streeter explained, is that this rocky period will subside, as inflation slows and interest rates plateau later this year.

Until that point, she said firms must endure a ‘resizing process’. ‘During the pandemic, tech firms had to meet a demand of hiring, but now they are trying to establish a team size that is just right,’ she said.

At some firms large numbers of staff have been axed, as at Elon Musk’s Twitter. But the layoffs are a drop in the ocean for Amazon’s army. 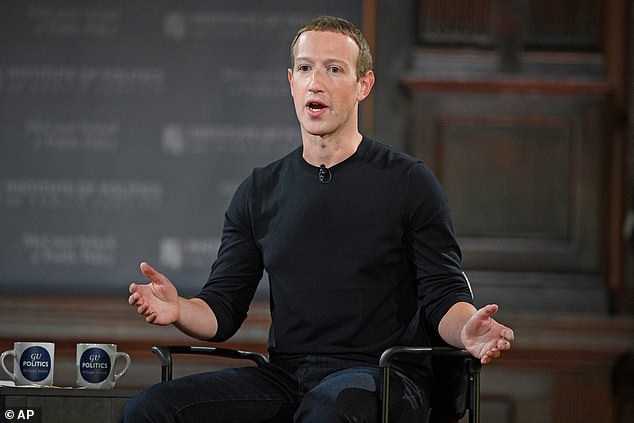 Dan Ives, an analyst at investment firm Wedbush, said: ‘These tech stalwarts need to rip the band-aid off and cut headcount and costs as the first step towards right-sizing their business model.’

Shares in Meta, which also owns WhatsApp and Instagram, are up 25 per cent per cent since the news that as many as 600 staff could go in the UK.

Although Apple and Google parent firm Alphabet appear to have survived without any sackings, the pressure is mounting –the iPhone maker slipped from the $2trillion club this week amid production concerns.

Both Amazon and Salesforce were lifted following their news, countering their respective 48 per cent and 38 per cent plunges in the past year.

AJ Bell analyst Russ Mould said Amazon’s retreat from experiments such as physical stores would allow it to go back to basics with its e-commerce and cloud focus.

‘The news was pleasing to shareholders who will prize any efficiencies which can increase their slice of the returns generated by the business,’ he said.

The feeling is one of redemption, where big tech attempts to claw back losses and reshape a direction that pleases investors – but possibly means purging staff.