News that the world’s richest man Elon Musk has formally taken over Twitter in a deal worth $44billion was met with a flurry of hilarious memes from users on the platform.

Twitter users flocked to the website after the deal was officially announced, with Musk himself chirping in with his own humorous post: ‘The bird is freed’.

The Tesla CEO, who immediately fired some of Twitter’s top executives, will not have to scroll for long on his newly acquired website to find a sea of memes.

Sources believe that Musk himself will take over as CEO – although it may only be an interim role.

John Paul Augustynowicz said in a short yet comedic Tweet: ‘All hail our new Twitter overlord. Long shall he meme.’

One of Musk’s first moves will be to restore users who have been handed lifetime bans from the platform – including former US president Donald Trump. 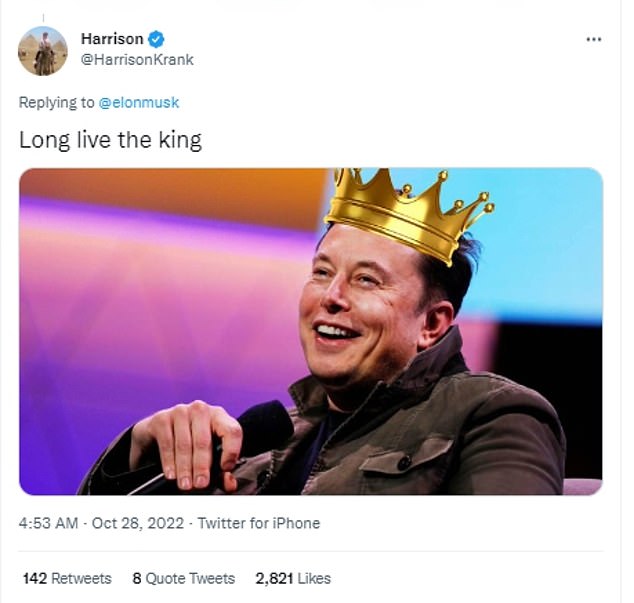 Musk himself posted a Tweet with the caption: ‘the bird is freed’ as the announcement was made that he would be taking over 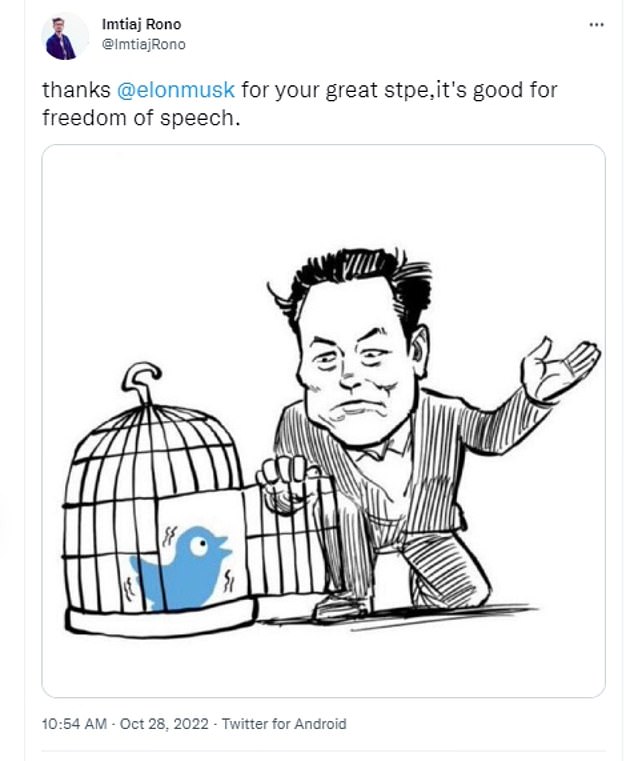 Republican Lauren Boebert, replying to Musk’s cryptic announcement on Twitter, said: ‘The bird is free, now free the GOAT. @realDonaldTrump’ – the acronym stands for Greatest Of All Time.

Hilarious memes have poured in all day, including videos of Musk dancing in a video for Tesla with captions such as: ‘Elon Musk after his takeover’.

Others poked fun at the news that Twitter’s CEO Parag Agrawal, the chief financial officer Ned Segal and the top lawyer for the firm, Vijaya Gadde, were culled just hours after Musk finalised the acquisition last night.

Agrawal, who has repeatedly clashed with Musk over the number of users Twitter has, will walk away from his job with $42 million, after being CEO for just under a year. 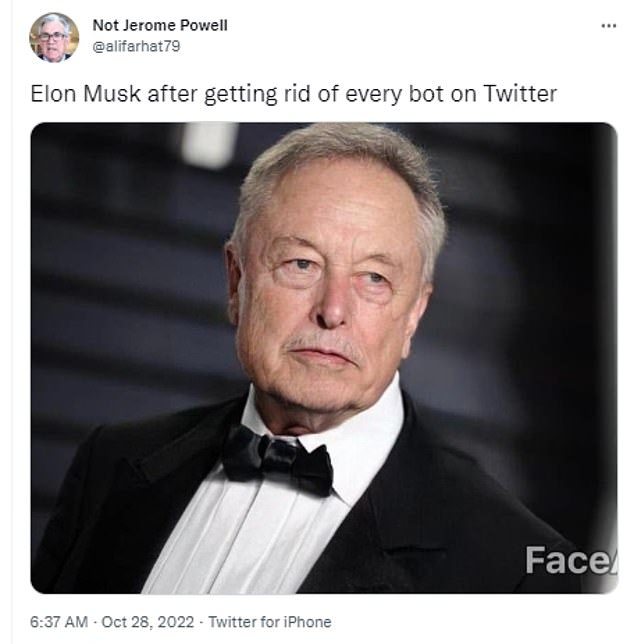 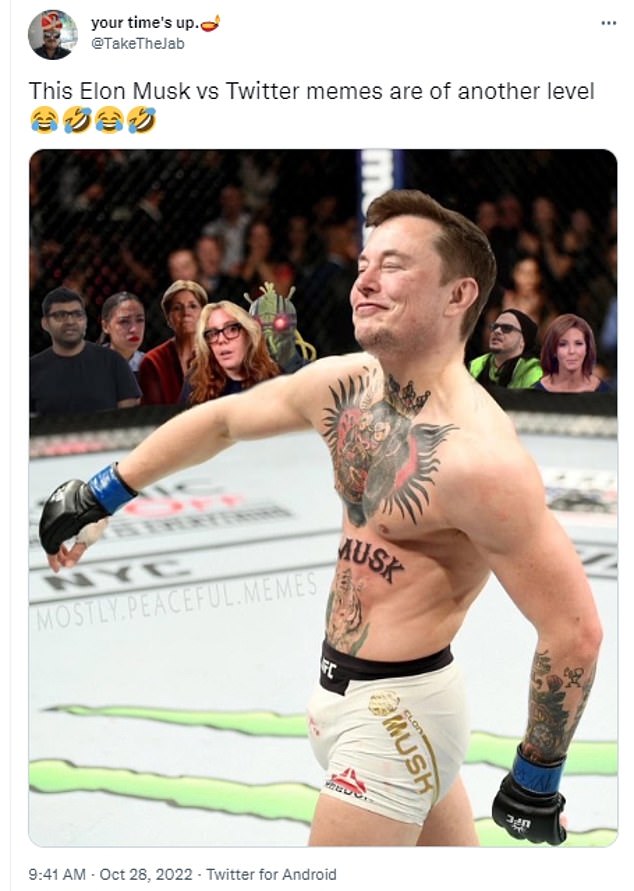 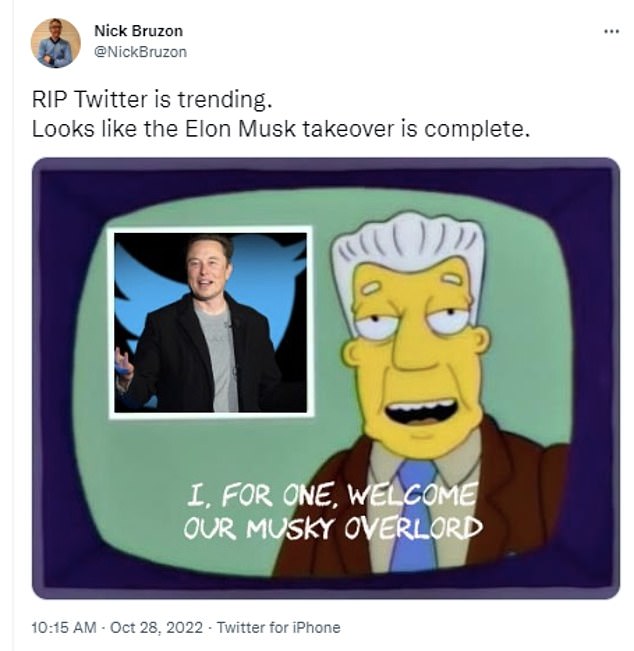 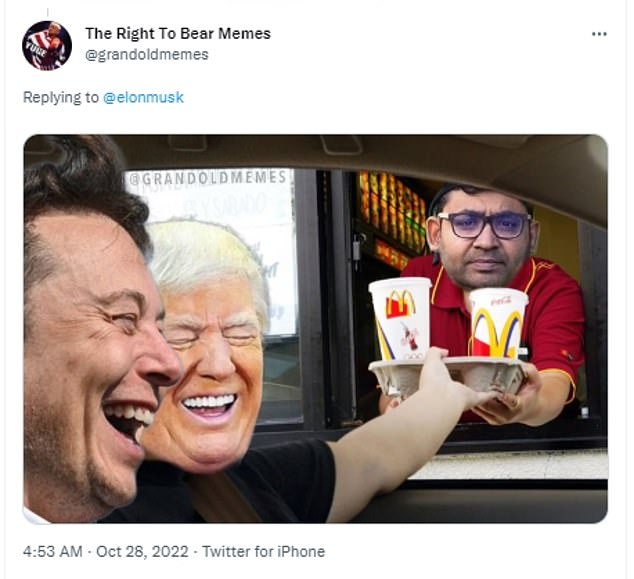 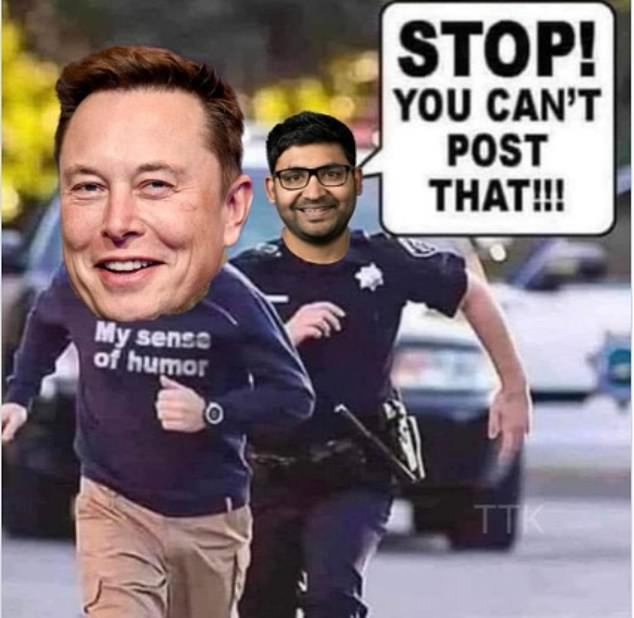 Hilarious memes flooded onto Twitter throughout the day including an image of former CEO Parag Agrawal chasing Musk down the road with a speech bubble that read ‘Stop! You can’t post that!!!’ in reference to the new owner’s views on censorship

One meme showed Musk and Trump in hysterics as they collected their food off Agrawal depicted as a McDonald’s worker in the window.

Meanwhile another user had photoshopped Musk’s face onto the body of Irish UFC fighter Conor McGregor, doing his iconic arrogant walk into the cage.

Delighted Twitter users paid tribute to the South African Tesla owner. One said: ‘Long live the king’, posting an image of Musk with a crown on his head.

And other witty users posted a famous scene from the Entourage where Hollywood super-agent Ari Gold gets revenge on many of his enemies as he storms through the TMA agency, paintballing all of the agents he’s firing.

Musk had publicly criticised Twitter’s existing leadership team – in particular, attacking their policies on content moderation and censorship. He has also sparred with them over data on how many accounts were bots or spam.

This deal completion comes at the eleventh hour – just one day before Musk was going to be dragged back into court after being sued by Twitter for a back-and-forth he had over whether he was going to buy the company.

On Wednesday, the billionaire changed his Twitter profile to identify himself as the ‘Chief Twit’ and posted a video of himself walking into the company’s San Francisco headquarters carrying a porcelain sink. 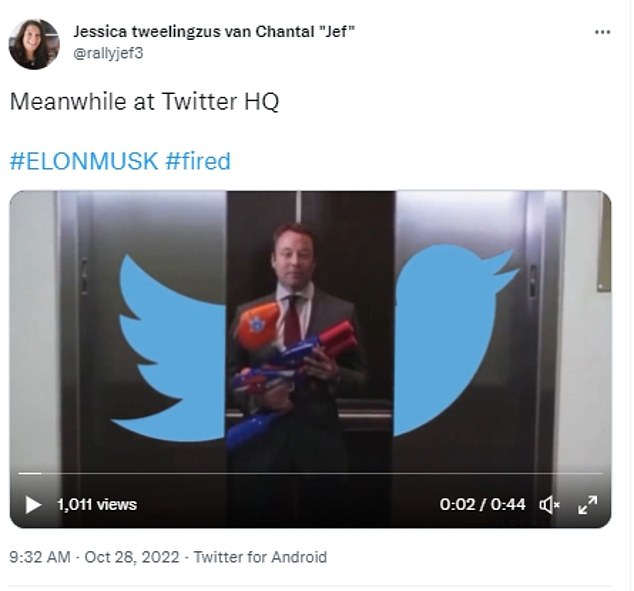 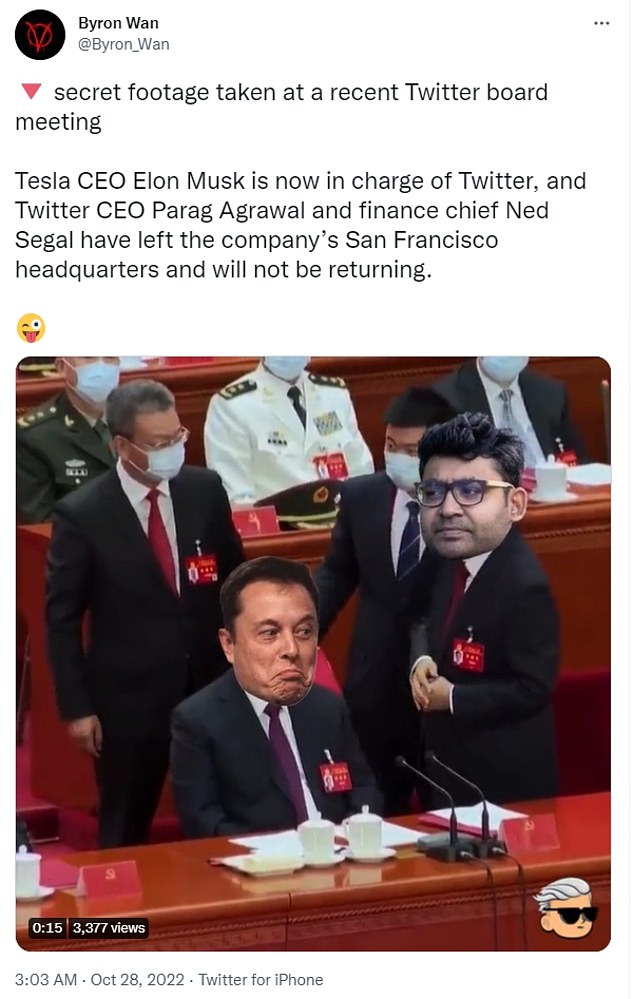 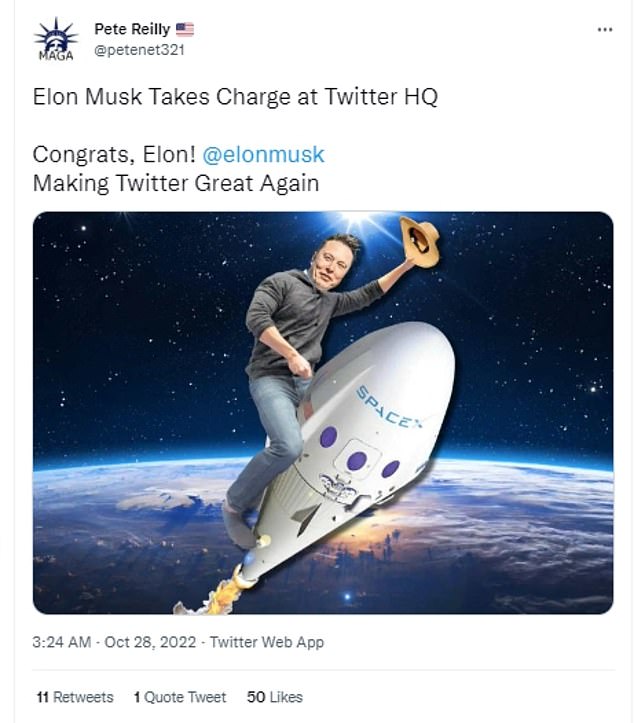 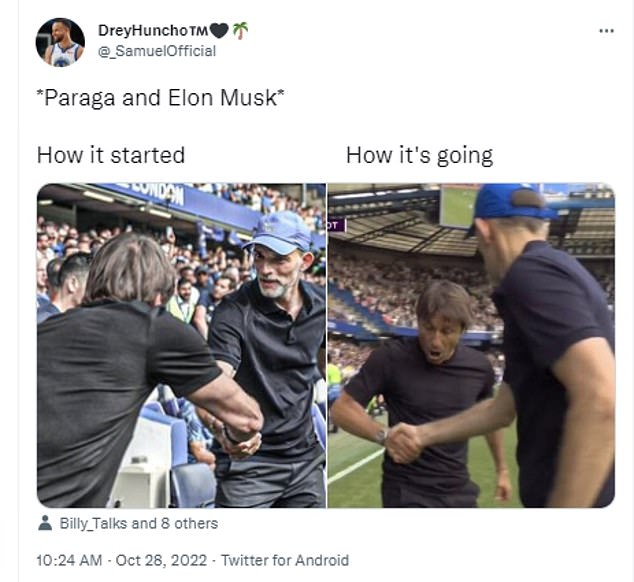 This fuelled rumours that Musk had closed the deal to buy Twitter in which he shared the clip with the caption: ‘Entering Twitter HQ, let that sink in’.

Musk, known for his comical Tweets, was trending on the social media platform for several hours.

Another hilarious meme showed Agrawal chasing Musk down the road with a speech bubble that read ‘Stop! You can’t post that!!!’ in reference to the new owner’s views on censorship.

Meanwhile another user posted a cartoon of Musk releasing the Twitter bird logo from a cage it had been trapped in.

Other creative users made reference to the battle between former Chelsea manager Thomas Tuchel and Tottenham Hotspur boss Antonio Conte. The pair had squared up to one another and viciously shook hands at the end of the 2-2 clash.

The Twitter user comically resurfaced the image of the manager’s before and after the game, comparing the relationship to Agrawal and Musk with the caption: ‘How it started How it’s going’.

Musk’s takeover was not entirely met with positive reactions however. ‘RIP Twitter’ was also trending on Twitter from those concerned that the platform will be less strict on censorship. 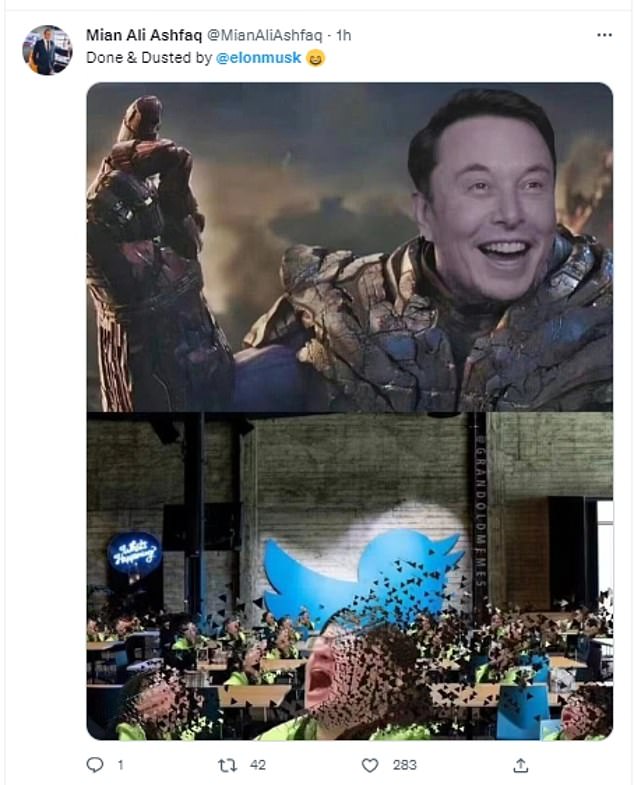 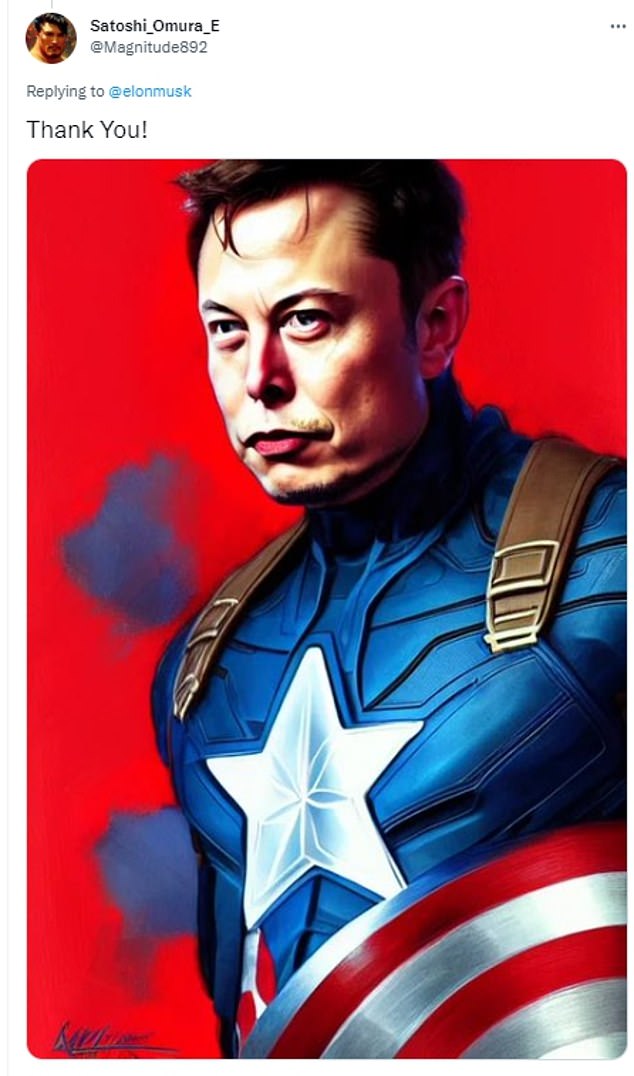 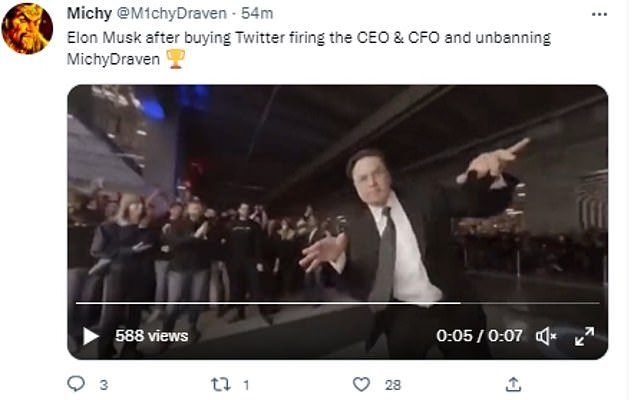 Despite some serious backlash from concerned Twitter users, many were delighted with the news. MichyDraven posted a video of Musk dancing in a Tesla video with the caption: ‘Elon Musk after buying Twitter firing the CEO & CFO and unbanning MichyDraven’

The billionaire has found himself in hot water previously for some of his views, including comments on transgender issues.

In 2020, he tweeted that ‘pronouns suck’ – then hastily deleted the post and said: ‘I absolutely support trans, but all these pronouns are an aesthetic nightmare.’

Musk’s transgender daughter, Vivian Jenna Wilson, also cut ties with him earlier this year and said she ‘no longer [lives] with or wish to be related to my biological father in any way, shape or form’.

But other’s came back with memes of Musk as an old man, with the caption : ‘Elon Musk after getting rid of every bot on Twitter’.