All hospitals in Greater Manchester will suspend non-urgent surgery and appointments from Monday, officials have said, in response to surging numbers of Covid-19 patients.

Those requiring treatment for cancer, urgent and specialist work are unaffected. But people waiting for so-called non-urgent operations, such as hip replacements, will have them rescheduled.

The Greater Manchester Health and Social Care Partnership (GMHSCP) confirmed the suspension to MailOnline and said patients who are affected will receive a letter in the coming days.

The number of Covid-19 patients in the city region surged 36 per cent in a week, NHS figures reveal. There were 5,400 patients with the virus in hospitals between October 21 and 27, but after seven days this had jumped to almost 7,500.

There are currently more Covid-19 patients in hospitals across the North West than there were at the peak of the first wave in April.

It comes after the NHS shifted to its highest alert level, with bosses warning non-Covid procedures will likely be disrupted in the next few weeks.

All hospitals in Greater Manchester will cancel non-urgent surgery and appointments from Monday, officials said. Pictured is Manchester Royal Infirmary, one of the hospitals affected

WHICH TRUSTS ARE AFFECTED?

The following hospitals and NHS Trusts will see non-urgent appointments and operations suspended from Monday.

A spokesman for the GMHSCP advised people not to call the hospitals. Those affected will receive a letter in the coming days.

A spokesman for the GMHSCP said the measure will be ‘temporary’ and aims to impact ‘the fewest number of patients’.

‘We understand how disappointing this will be for patients who have appointments or procedures affected, especially those who have already waited some time,’ they said.

‘However, this action is in the best interests of patients in Greater Manchester, balancing all the risks and benefits.

‘We know many people waiting for treatment will be disappointed or worried.

‘Our hospitals will be contacting everyone affected as soon as possible.’

Senior hospital bosses made the decision during a ‘cell’ meeting earlier this week, where they collectively agreed to the move.

Surgery is set to continue at Rochdale Infirmary, which is a Covid-free site, alongside specialist hospitals including The Christie.

The Manchester University NHS Foundation Trust said yesterday it would be cancelling some non-urgent operations so that it could treat Covid-19 patients and emergency cases.

A spokesman said: ‘We have had to take the difficult decision to pause some of our planned procedures including some surgery and outpatient appointments.

‘This decision will be kept under review and has been taken for the safety of all our patients as currently we must treat more patients who are attending our hospitals with Covid-19 who require specialist and critical care support.

‘We have written to those people who are affected by this decision and local GPs and will be contacting them directly with revised dates for their appointments and procedures.’ 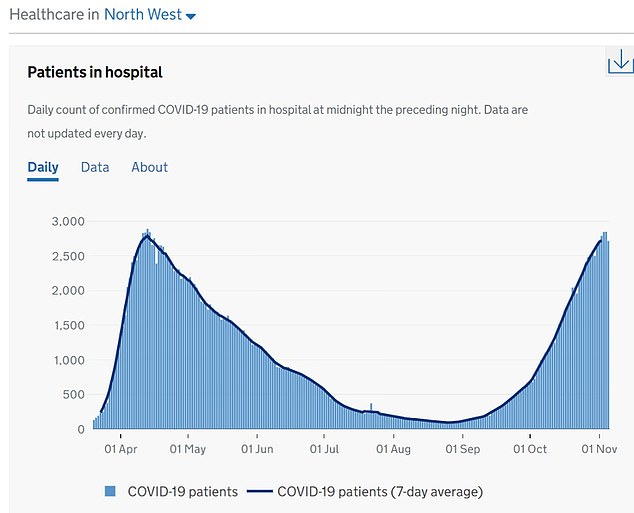 Wigan and Stockport NHS Trusts have also already taken the decision to suspend non-urgent operations, in response to mounting pressures.

Manchester was moved into Tier Three restrictions in response to surging coronavirus cases on October 17.

The city had a coronavirus infection rate of 456,2 cases per 100,000 people in the week ending November 1, a drop of almost 10 per cent from the week before.

The Queen Elizabeth Hospital, in Birmingham, suspended all its non-emergency procedures yesterday due to a surge in Covid-19 patients.

Hospital officials said they are treating 389 people with coronavirus across their sites, and have 36 in intensive care.

The NHS was moved to its highest alert level this week after NHS bosses warned non-Covid treatment will be disrupted due to surging hospitalisations.

Sir Simon Stevens, NHS England’s chief executive, claimed the move to level four was in response to the ‘serious situation ahead’. He warned non-Covid treatment would be disrupted again if the outbreak ‘takes off’.

A move to level four means health bosses believe there is a real threat that an expected influx of Covid-19 patients could start to force the closure of other vital services across the nation.

It came amid startling warnings from Number 10’s advisory panel SAGE, used to justify the country’s second lockdown, that the health service could run out of beds within weeks unless tougher action is taken. Boris Johnson even warned the sick ‘would be turned away’, if the NHS became overwhelmed.