Ioan Gruffudd’s estranged wife Alice Evans has accused her ex of cheating on her for three years with her friend Bianca Wallace.

Alice, 50, took to Twitter to pen a scathing rant telling fans that she was ‘lost, sad and confused’ after learning of his infidelity and claimed the Liar actor, 48, adding: ‘I feel like killing myself.’

Alice’s tweets came just minutes after Ioan made his romance with Bianca, 28, ‘Instagram official’ by sharing a beaming image with her on-set alongside the caption: ‘Thank you for making me smile again.’

‘Good luck!’ Ioan Gruffudd’s estranged wife Alice Evans, 50, has accused her ex of cheating on her for three years with actress Bianca Wallace 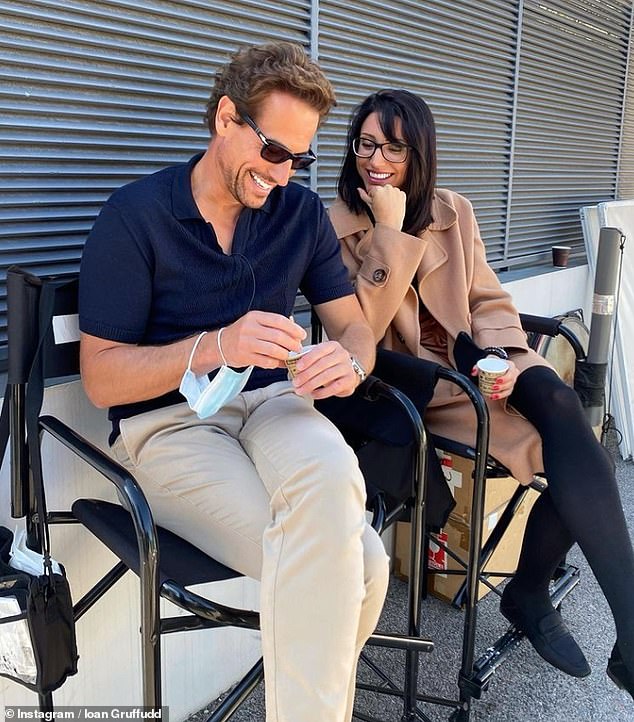 Claims: Minutes before Alice tweeted her claims, both Bianca and Ioan made their romance Instagram official by sharing the same image, with the actor penning the caption: ‘Thank you for making me smile again @iambiancawallace’

Sweet: Along with his gushing caption, Ioan accompanied his post with two love heart emojis

In her tweets, which she posted on Wednesday, Alice first shared an Instagram photo that Bianca had uploaded weeks earlier, which showed a group seated in chairs that were lined up on the beach.

She wrote: ‘I have no words. My husband sent this to Elsie, our 8 yo last week and asked her if she thought he was a good photographer. I am lost. Totally lost and sad and confused…’

Among the responses to her bombshell, one fan asked ‘Who’s Bianca?’ leading Alice to respond: ‘Bianca Wallace seems to be the person he has been in a relationship with for three years whilst blaming our difficulties on me.

‘I’ve just found this out tonight. I feel like killing myself. (I won’t).’

‘WTH?’ Following Ioan’s post, Alice accused Tamzin Outhwaite of ‘knowing about it’ after she left a gushing comment 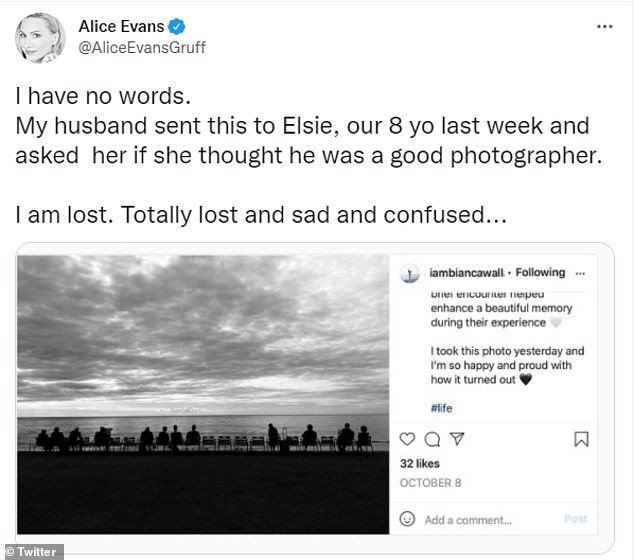 Bombshell: In her tweets Alice shared an Instagram photo that Bianca had uploaded weeks earlier 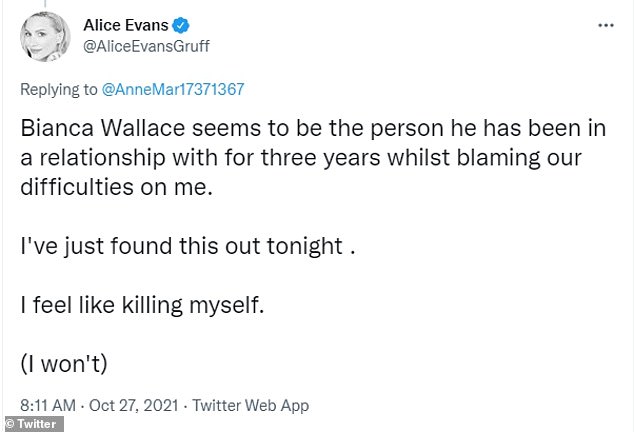 Shocked: Among the responses to her bombshell, one fan asked ‘Who’s Bianca?’ leading Alice to respond: ‘Bianca Wallace seems to be the person he has been in a relationship with’ 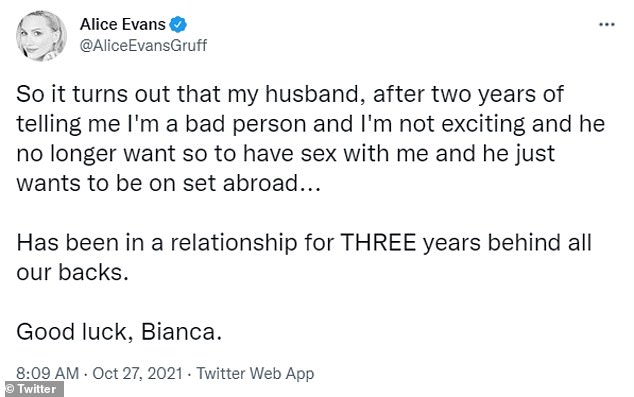 ‘Good luck!’ In her final tweet Alice claimed that Ioan had been in a relationship with Bianca for three years, and ended her post: ‘Good luck’

Who is Bianca Wallace?

Bianca Wallace is an actress who has previously starred in the 2020 short film Bloodline.

She has also had roles in the TV mini-series Relations**t and Loveland, which is in post-production.

Over the summer Bianca spent several weeks in Australia, where Ioan had been filming his TV series Harrow.

In her final tweet, Alice added: ‘So it turns out that my husband, after two years of telling me I’m a bad person and I’m not exciting and he no longer want so to have sex with me and he just wants to be on set abroad… Has been in a relationship for THREE years behind all our backs. Good luck, Bianca.’

Bianca is an actress and producer who previously starred in the 2020 short film Bloodline.

Minutes before Alice’s tweets, Bianca took to Instagram to share an image of herself beaming with Ioan, which she captioned: ‘I know real smiles when I see them @ioangruffudd.’

Ioan, who shares daughters, Ella, 12, and Elsie, eight, with Alice, proceeded to share the same snap with the caption: ‘Thank you for making me smile again @iambiancawallace.’

Following the post, Alice accused Tamzin Outhwaite of ‘knowing about it’ under Ioan and Bianca’s romantic post.

Alice then furiously responded? ‘@glamzin Tamzin? WTH? You knew about this???’

She later tweeted Ioan’s Harrow co-star Ella Newton, writing: ‘@EllaKNewton So you KNEW they whole time and you CONGRATULATED them? Do you know they have broken up. family? How can you possibly ? This will stay with you forever.’

MailOnline has contacted representatives for Tamzin Outhwaite and Ioan Gruffudd for comment.

New romance? Minutes before Alice’s tweets, both Ioan and Bianca shared the same on-set image, together with the actress penning the caption: ‘I know real smiles when I see them’ 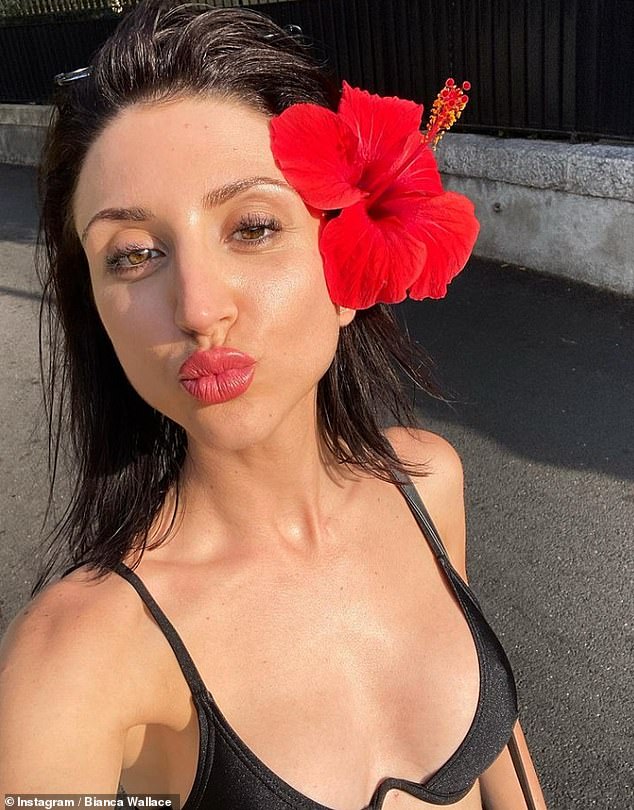 Bombshell: Bianca is an actress and producer who previously starred in the 2020 short film Bloodline, and also had roles in the TV mini-series Relations**t and Loveland

Hours before sharing her claims, Alice shared an Instagram post alluding to the fact that Bianca was her friend before he and Ioan began dating, writing: ‘Tonight, after learning that a person I thought was a friend might not be. But MORE IMPORTANTLY, is my wig on straight?’

Alice hasn’t been shy of airing the breakdown of her marriage to Ioan on social media, and previously slammed him for being ‘devoid of any empathy’ and ‘disingenuous’.

She claimed that the Liar actor has been ‘ghosting’ her for nearly a year.

‘I haven’t spoken to my husband in 9 months (his choice),’ she penned. ‘I did my fair share of crying, screaming, accusing. I begged and begged for at least some sort of running discussion. That’s my way of reacting to such a life-changing event.

‘So he ghosted me. I have been ghosted for almost 10 months now!’ 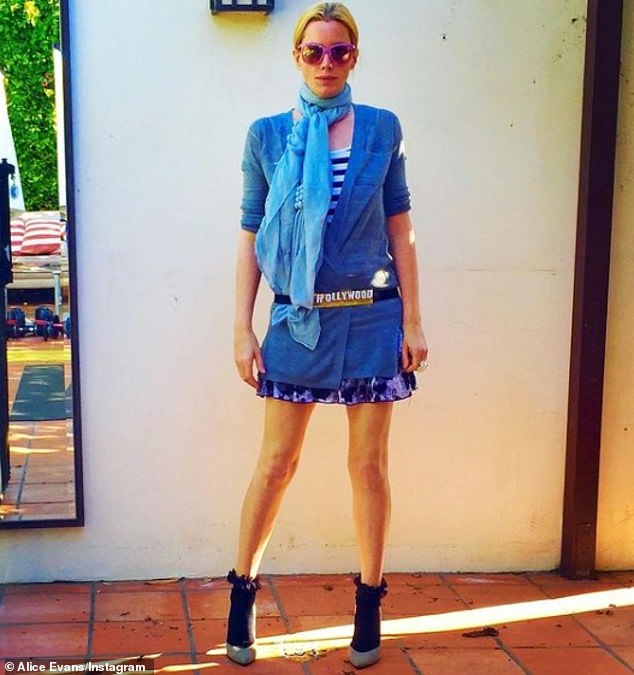 Rant! Alice hasn’t been shy of airing the breakdown of her marriage to Ioan on social media, and previously slammed him for being ‘devoid of any empathy’ and ‘disingenuous’

She went on: ‘If you read this and feel anger or upset towards ME for sharing, that’s OK. For me, as some of you will know, this was a case of the drop that overflowed the glass.

‘For others it must have come as a bit of a shock, or a strange thing to do. I totally understand.

‘This is the real Ioan Gruffudd. I’m not bending over for this guy. This man is devoid of any empathy whatsoever!’ 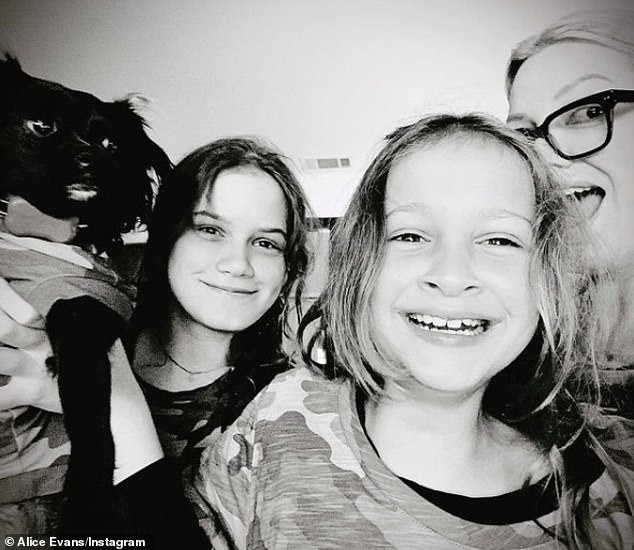 Claims: She claimed that the Liar actor – whom she shares daughters, Ella, 12, and Elsie, eight, with – has been ‘ghosting’ her for nearly a year

She also claimed: ‘He also wanted me to sign a legal document saying that it was MY FAULT that he couldn’t get any work. (Hey – this is Hollywood). I don’t care any more. I’m done!’

This comes after Ioan was in attendance earlier this week at the La jeune fille et la nuit red carpet as part of the Cannes International Series Festival in France. 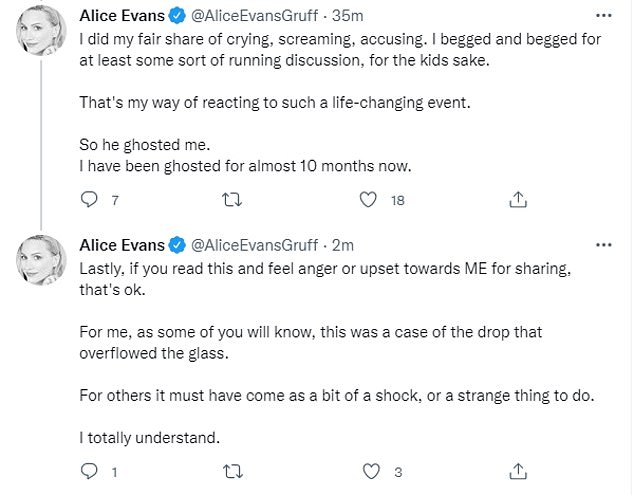 Alice completed her rant with: ‘I don’t care any more. I’m done’

The actor looked cheerful as he posed in a tuxedo en route into the event.

Prior to her most recent outburst, Alice playfully poked fun at her estranged husband’s nose in a tongue-in-cheek post she shared to Instagram in September.

She shared a black and white photo of Ioan cuddling one of the couple’s daughters on the sofa and couldn’t help but make a jibe at her ex. 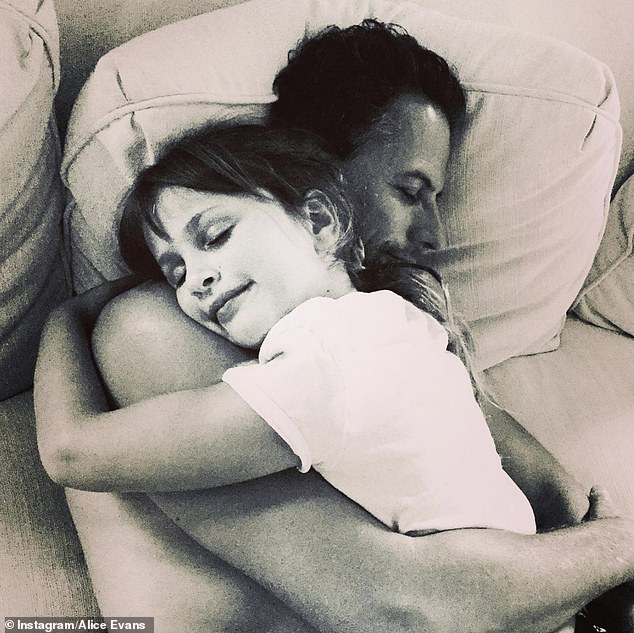 Ouch: Prior to her most recent outburst, Alice playfully poked fun at her estranged husband’s nose in a tongue-in-cheek post she shared to Instagram in September

The sweet snap captures the adorable moment between the father and daughter, with Ioan appearing in the photo shirtless and with a side profile.

Alice captioned the post: ‘A thing of beauty. I know. The only thing we all worry about secretly is: will she get his nose? Shhhh!’

Alice took to Instagram once again to insist her comment was all in good humour and she had only been joking around. 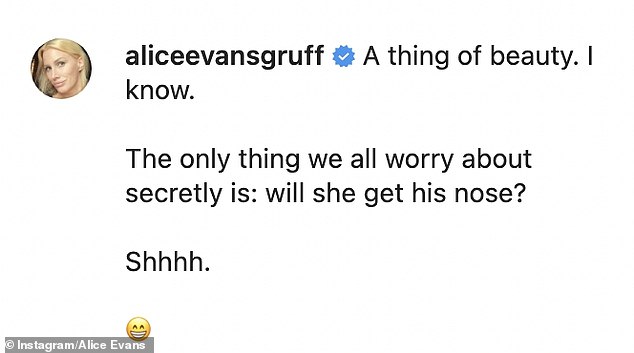 ‘Will she get his nose?’ Alice was seen jokingly sharing her worries over her daughter inheriting estranged husband Ioan’s nose

‘I was joking about the husband, honest,’ she said alongside a close-up shot of herself as she teased once more: ‘I mean look [at] this – she would TERRIFY you!!!!’

Alice was also seen light-heartedly asking for applications for her ‘second husband’.

She said alongside another selfie: ‘Mood? Black snd white and i’m doin alright. If you want to apply for the part if ‘second husband” please let me know below. (sic)’

Alice continued: ‘I just want a nice chap who is a raging democrat abs likes to talk and talk and talk about anything. ( interest in fashion, foreign languages and civil aviation would obviously help! )’ 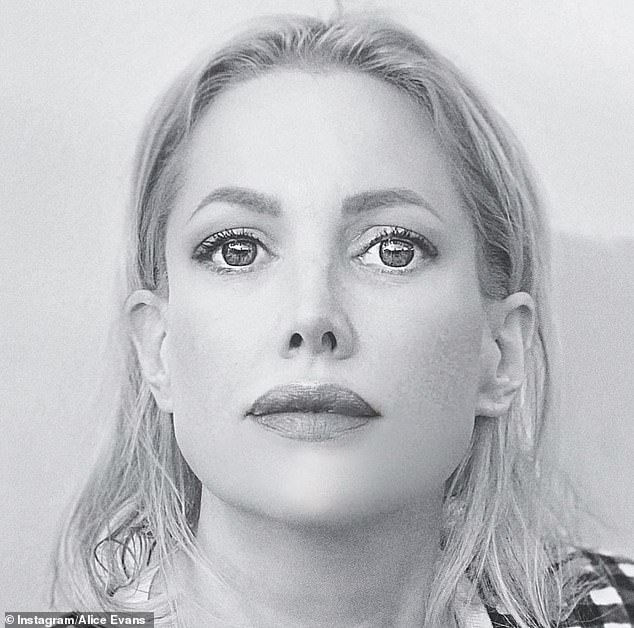 Only kidding: Alice then insisted she was joking in another post she shared online where she was then seen poking fun at a black and white snap of herself

Poking fun: The mum-of-two told fans she was ‘joking about the husband, honest’

Ioan filed for divorce from Alice in March, citing irreconcilable differences as the reason behind their split.

The document, which was filed in Los Angeles Superior Court on March 1, revealed the former couple separated on New Year’s Day – a month before they went public with their relationship status.

At the time, they had shared a joint statement that read: ‘As you can imagine, this is an incredibly difficult time for our family and we remain committed to our children. Thank you for respecting our privacy.’

It’s reported the divorce papers state the exes are in a ‘collaborative process and intend to resolve all issues including spousal support by written agreement’.

Alice, meanwhile, had addressed the pair’s split in a shock statement shared to Twitter in January in which she claimed Ioan had ‘mentally tortured’ her.

The mum-of-two also accused her estranged husband of ‘winding the s**t up me’ as she posted a vitriolic video about their ‘collaborative divorce’ talks.

She said: ‘I have been served with a petition for divorce and it’s came out of the blue and I won’t cry. But we’ve been 20 years together, we have two amazing kids. I don’t know why.

‘At the moment we’re doing something called collaborative divorce which is somewhere between a really kind way of doing divorce and a phenomenal scam.

‘Because in one way it’s “okay, let’s hear what you would want and take it to the court afterwards” and in another way it’s like, people in the acting business will know when an agent says to you “we just can’t find you the roles.”

‘It’s a bit like, I’d like my daughter to stay with me on Saturday nights, “it’s just not within our possibilities.”‘

TV and film star Alice then insisted Ioan had misled her with collaborative divorce, adding: ‘And then I read nothing is binding in collaborative, absolutely nothing.

‘So if I want my daughter to stay one more night in my house, the court hasn’t said anything so I can do it. So my husband is winding the s**t up me, saying what he says is the law, well we haven’t got to the law yet.

‘Lawyers aren’t the law. Lawyers are there to f*** the law. That’s what I always said. Anyway I may have some more thoughts later.’

Alice was also seen hitting back at criticism over speaking about details of her divorce with Ioan so publicly and the impact it may have on their children.

Alice hit back stating that the girls had no idea about the couple’s public profile and ‘probably never will’.

Alice and Ioan met on the set of 102 Dalmatians in 2000, when Alice was in a relationship with Pablo Picasso’s grandson Olivier.

She and Ioan became engaged six years later after she gave him an ultimatum about their relationship, and they tied the knot in an intimate ceremony in Mexico in September 2007. 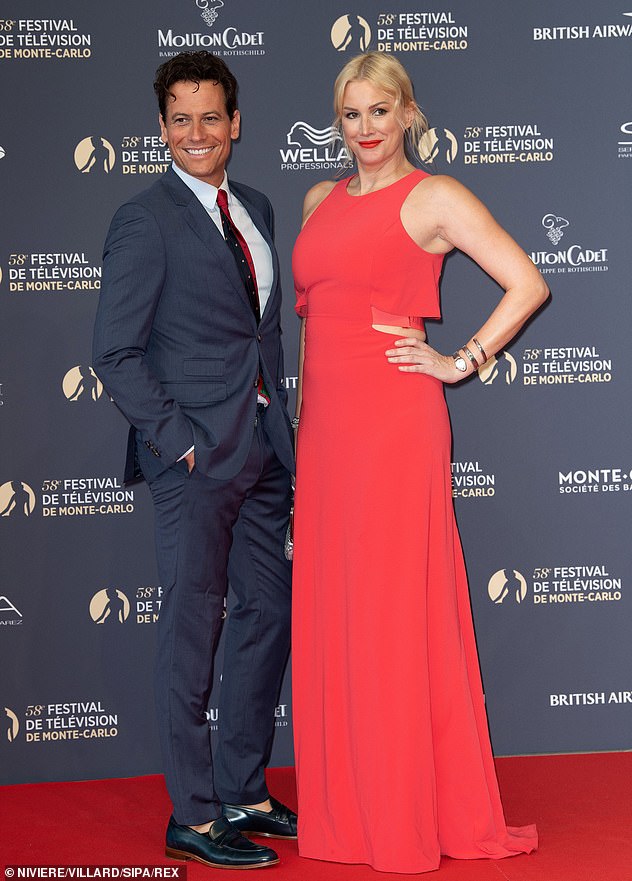 All over: Alice confirmed she and Ioan were splitting after 20 years in a shock statement she shared on Twitter in January, earlier this year (pictured together in 2018)