A mumpreneur who could drink 20 litres of water and still feel thirsty due to a tiny brain tumour is being kept alive with carefully administered doses of medication when she starts to dehydrate or sweat.

Sophie Doyle, from Perth, Australia has opened up on her rare life-threatening health condition and how she overcame it to start a family and successful business.

Ms Doyle was just 20 and living in Thailand when she became incredibly ill overnight.

The now 36-year-old told Daily Mail Australia how she woke in the middle of the night feeling unbelievably dehydrated, but no amount of water could quench her thirst.

Ms Doyle returned to Australia but doctors could not determine what was wrong with her for five long weeks.

Sophie Doyle (pictured) from Perth, Australia was diagnosed with diabetes insipidus which causes an imbalance of fluid in the body and doesn’t allow it to retain water. 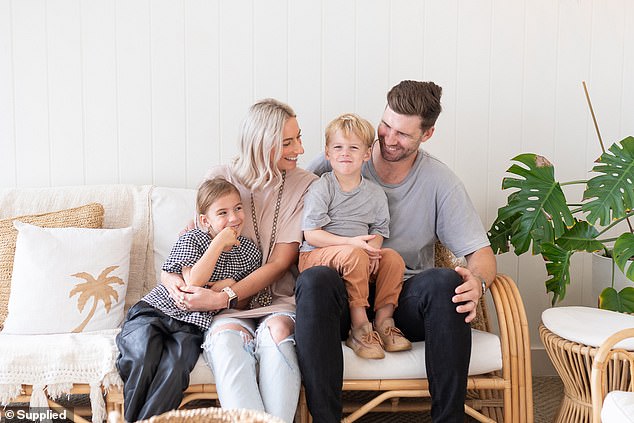 ‘I often feel dehydrated, I don’t absorb nutrients properly and struggle to hold water in my body, but doctors have no idea what caused the auto immune condition,’ she said

Her world was turned upside down when tests eventually detected a fatal tumour on her pituitary gland, leading doctors to diagnose her with diabetes insipidus on December 28, 2005.

The uncommon disorder causes an imbalance of fluid in the body and doesn’t allow it to retain water.

‘I often feel dehydrated, I don’t absorb nutrients properly and struggle to hold water in my body, but doctors have no idea what caused the auto immune condition,’ she said.

‘When I was in Thailand, one minute I felt fine and the next I was drinking 20L of water that flushed straight through my body.’

Ms Doyle had to face the heartbreaking reality of her condition after being told she may not be able to have children and would be reliant on hormone replacement medication.

Her tumour was only 1cm long but was impacting the functionality of the pea-size pituitary gland in the brain responsible for the secretion of the body’s hormones.

‘I was given this prognosis at a time of my life where I was just learning to figure it all out, which fuelled my desire to always go after what I want,’ she said.

‘I didn’t let it stress me out and only started thinking of the implications after I got married.’ 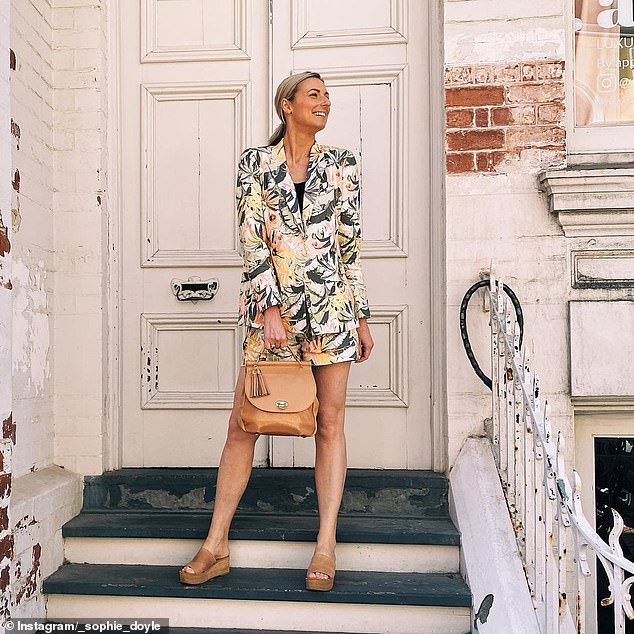 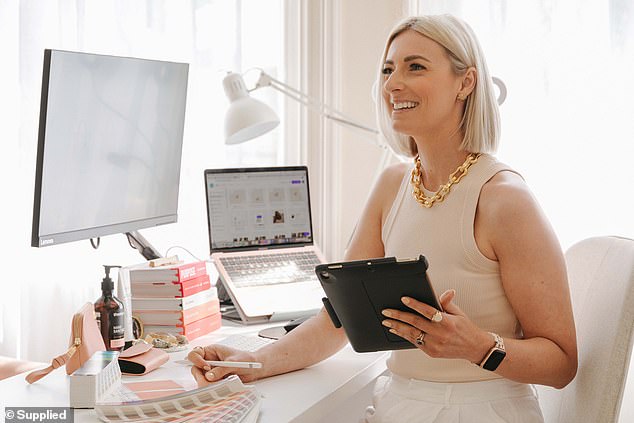 She now needs to take medication two to three times a day every time she feels thirsty, sweats without exercising or has a runny nose

Consider what your product is and supply chain

Create a product that’s small, light and easy to send to customers

Don’t outsource people to do jobs right away, do as much as you can yourself

Have a point of difference

Invest time and money into the idea

Ms Doyle and her partner managed to fall pregnant naturally and quickly despite their initial fears they might not be able to conceive.

She still has to closely monitor her body to determine when she needs medication, which could be up to three times a day.

‘I’ve always been self-aware enough to know what’s going on with my body and understand when my body needs the medication – but I need to be extremely careful if I take too much I’ll end up in hospital,’ she said.

Ms Doyle takes the medication when she starts to feel an insatiable thirst, or sweaty without exercising, or if she has a runny nose.

She has learned to ‘deal with it’ over the years despite the medication being extremely complicated to manage.

The shock health diagnosis made her realise ‘life is too short’ so in 2016 she started her own baby goods brand Alf the Label.

‘I had always worked in corporate for the government and never aspired to become a business owner,’ she said. 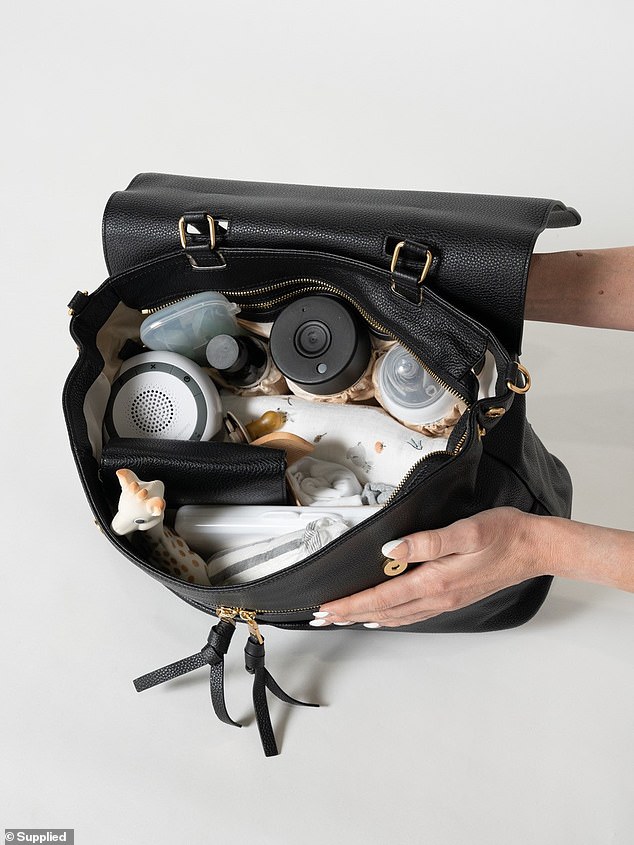 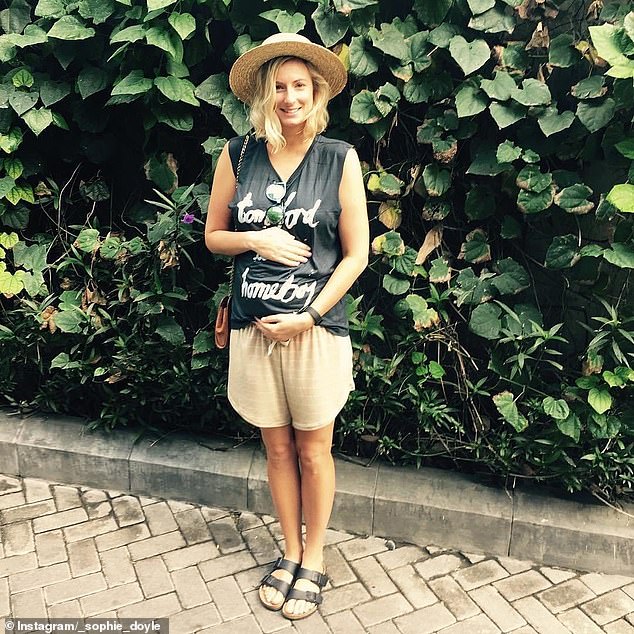 ‘Since being diagnosed I have tapped into a positive mindset of life-guiding moments and realised life is too short.’

Ms Doyle said she struggled finding a stylish but practical baby bag after having her first child Ari .

She saw an opportunity to help other parents by designing a luxe baby bag that looked beautiful from the outside with a fully-functional interior.

Five years after launching her first bag – the Stella Tote – Alf the Label is now one of Australia’s most loved accessories brands for parents, with a loyal community of more than 50,000 people worldwide.

She initially thought the brand was going to be a small ‘side hustle’ but is now overwhelmed by its success. 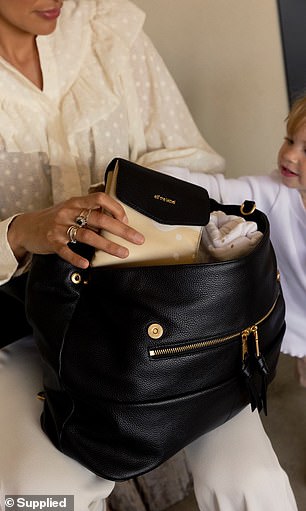 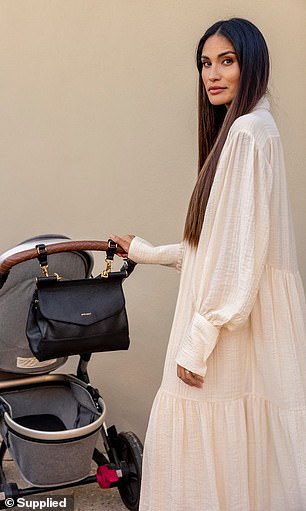 Alf the Label is now one of Australia’s most loved accessories brands for parents, with a loyal community of more than 50,000 people worldwide.

Ms Doyle invested $7,000 to get the business off the ground and worked on growing the brand by herself.

‘If you have an idea, you can think big you just have to be creative with the money and be willing to do everything yourself for a while rather than outsource,’ she said.

‘If you are willing to put in the hard yards, you never know what you can achieve.

‘More importantly, don’t let something that’s impacting your life get in the way of your passions.’