From Aristophanes’s Lysistrata plotting an Athenian women’s sex strike, to the wealthy, murderous Monterey Bay wives of Big Little Lies, we adore a girl power narrative where it’s all about the group sticking together

Never underestimate the power of the girl squad. It wasn’t Lady Macbeth alone who caused so much trouble for her tormented husband but also the dire predictions from those fearsome witches on that blasted heath.

I imagine Boris knows how the doomed Lord feels after his plan to appoint Lee Cain as Chief of Staff blew up so spectacularly.

Whether such diverse characters as Carrie Symonds, Allegra Stratton, Priti Patel and Munira Mirza really gathered together to brew up eye of newt and wool of bat – or even combined forces over a glass of fizz or more likely a Zoom call – to stop that particular appointment is not known.

Probably not, I would hazard. But no matter. Because it’s the notion of a female collective on the march that is utterly fascinating to women and absolutely terrifying to men, who will often see conspiracy where there is none – and where there is, will swerve speedily in the opposite direction to avoid confrontation.

Here is no place to delve into amateur anthropology. But it’s worth remembering that the role of women in even the earliest societies was as a collective who would maintain the home turf as something for the men to return to.

Caveman chaps didn’t want the ladies going rogue while they were out spearing bison, so there was no nice meal on the fire when they got home.

The band of females is a winning concept. From Aristophanes’s Lysistrata plotting an Athenian women’s sex strike, to the wealthy, murderous Monterey Bay wives of Big Little Lies, we adore a girl power narrative where it’s all about the group sticking together.

While men? Well I offer you Lord Of The Flies: thuggery, chaos, betrayal – and Boris’s Vote Leave gang.

A large part of the potency of all-female groups in the modern media age is that more eyeballs – of both sexes – are attracted by images of women than men. 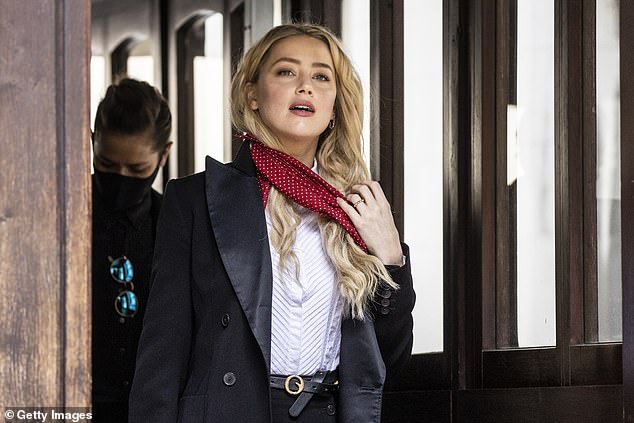 Amber Heard must have known the visual value of arriving at the High Court with her sister and lawyers in a hand-holding, blonde triumvirate, as she effectively demolished Johnny Depp’s career

The telegenic qualities of Alexandria Ocasio-Cortez and her white-jacketed Democratic squad in the 2019 House of Representative gained them more visibility than an incoming cadre of grey suited blokes could have ever earned.

Amber Heard must have known the visual value of arriving at the High Court with her sister and lawyers in a hand-holding, blonde triumvirate, as she effectively demolished Johnny Depp’s career.

When it comes to 10 Downing Street, there is enough chaos around the place without anyone needing a perceived coven of clever, powerful women to stir it up.

But it’s delicious to imagine Carrie, Allegra et al taking hold of the frequently misogynistic culture, chucking it into the bubbling cauldron – and even adding a dash of toe of frog for good measure.

The latest look? Go out in your nightie

Last week an American homewear company, Hill House Home, sold £760,000-worth of their ‘Nap’ dress in a single day, reported the Business of Fashion website. Not bad going. But what on earth was a ‘Nap’ dress, I wondered?

Well, it turned out to be a nightie with benefits. A girly cotton number with a full skirt and bodice that you can also go out and about in.

The success surely lies in the clever allure of that word ‘nap’. Not a full-on sleep but a bit of a doze, hopefully curled up somewhere cosy for a short while before you jump up to collect Lara and Josh from school.

Yes, I know that most of us nap in our jeans and sweaters and probably don’t even get around to removing our shoes. But the founders of the nap dress are making a shedload of money by suggesting we do otherwise.

Of course, many of us no doubt already own things that would work as nap dresses but since we hadn’t heard of nap dresses, we didn’t know we had them. Either way, they make a welcome change from track pants.

Much as we love to hate Amazon, there have been many reasons to be grateful to Jeff Bezos over these past months. Nonetheless, with Christmas coming, it’s good to know of an alternative for book shopping.

Bookshop.org allows you to buy books online from independent bookshops and makes a donation to them from a centralised site. So far more than £125,000 has been raised.

Like so many small businesses, local independent book stores have suffered through both lockdowns as they find it hard to launch and maintain their own website. So we end up going on Amazon. But Amazon, as well being unhealthily powerful, also offers massive discounts on best sellers that perpetuates the success of the few at the expense of the many and discourages publishers from taking a bet on new talent.

By trying bookshop.org we will be evening out the game in every way.

My reality check for the chess queen

Games aren’t any fun if you always lose. How I wish I were any good at Scrabble or backgammon or, particularly, chess, which I can’t play at all. Even without knowing my rook from my knight, the current TV must-watch The Queen’s Gambit is great fun and gorgeous to look at.

But I’d lay odds that a drama about an alcoholic child chess genius would never have been as popular if we weren’t all stuck at home, facing another three weeks of evening lockdown with the empty wine bottles lining up.

A grim glimpse of our zombie future

I and a friend were two of the last ones out of Kensington Gardens earlier in the week and what a strange sight it was. One of London’s loveliest parks had been packed as we all enjoyed an afternoon walk in the autumn sunshine.

Now a long snake of shadowy characters queued in the gloaming to get out of the one narrow turnstile gate still open.

Just like a foreshadowing of the zombie life ahead if we don’t get our freedom back soon.

Love is… a pair of Dot Cotton slippers

I asked for a pair of navy shearling slippers from David for my birthday this week and hey presto… they arrived. They’re heavenly but obviously deeply unsexy.

It’s not his idea of fun watching me slop around in them like a latter-day Dot Cotton. But it is in such sacrifices that love is surely to be found.