Unknown Aussie wildcard, 25, comes from nowhere to cause a HUGE upset at the Australian Open and advance to the second round as the tournament’s first seeded player is knocked out

Wildcard Aleksandar Vukic has become the first local winner on day one of the Australian Open with a four-set upset triumph over No.30 seed Lloyd Harris.

‘This is totally a dream. Especially this court, with all these guys. I mean I came here as a kid and I was watching the Aussies play here,’ he told reporters after the win.

‘To play here myself and to get the win, I can’t put it into words. I’ll treasure this moment for the rest of my life.’

Aleksandar Vukic scored himself a standing ovation after defeating No.30 seed Lloyd Harris on Monday

The 25-year-old received a standing ovation from the delighted home crowd as Vukic shook his head, seemingly in disbelief after posting his breakthrough first main-draw win at a grand slam.

Vukic’s reward is a second-round clash against Moldovan qualifier Radu Albot, with the winner of that match likely to next face No.3 seed Alexander Zverev.

He admitted to feeling nerves serving out to take the fourth set and the match but said the presence of his family and friends helped him get through it.

‘They’re the reason why I am here. My whole family is here and a few friends as well. It means the world,’ Vukic said. 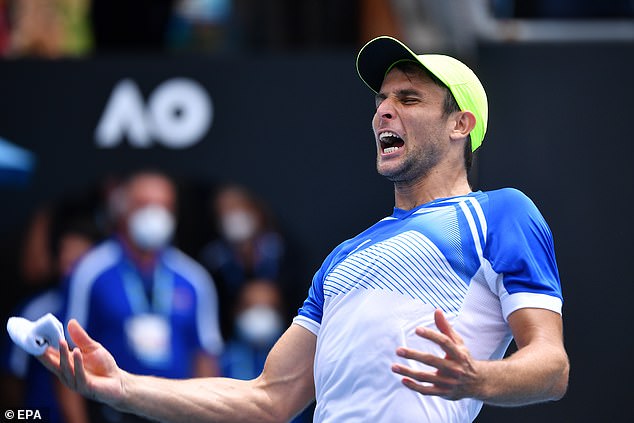 The 25-year-old received a standing ovation from the delighted home crowd as Vukic shook his head, seemingly in disbelief after posting his breakthrough first main-draw win at a grand slam

‘They are with me day in and day out and through ups and downs. A lot of stuff that people don’t see. I’m so grateful for them.’

It continued a good recent run of form from Sydneysider Vukic, who reached his first ATP Tour quarter-final last week in Adelaide before bowing out to eventual champion and fellow Australian Thanasi Kokkinakis.

Harris became the first seed to exit the tournament on day one at Melbourne Park.

There are six locals in action on Monday including women’s world No.1 Ash Barty, Ajla Tomljanovic, John Millman, James Duckworth and Kokkinakis.