By Michael Blackley Scottish Political Editor For The Daily Mail

Alex Salmond is expected to clash with the Holyrood inquiry next week, MSPs have been told.

Members of the committee carrying out the probe were yesterday told the former First Minister is attending on Wednesday.

It comes after the Scottish parliament decided to go ahead with publishing his written evidence.

Alex Salmond is expected to clash with the Holyrood inquiry next week, MSPs have been told. Members of the committee carrying out the probe were yesterday told the former First Minister is attending on Wednesday

Mr Salmond has not publicly confirmed that he is attending and Holyrood officials yesterday said they were unable to comment.

But MSPs on the committee were informed by officials that he is expected to give evidence and they should work on that assumption.

It means Mr Salmond will be questioned under oath by MSPs about the investigation into complaints made about him, and the role of senior officials and Nicola Sturgeon.

He will also face questions about his claims that Miss Sturgeon has repeatedly misled parliament about meetings they held in 2018 to discuss the complaints.

His account – submitted to the Holyrood inquiry and to a separate investigation by James Hamilton, QC, into whether Miss Sturgeon broke the ministerial code of conduct – accused her of making ‘simply untrue’ and ‘untenable’ claims.

Parliament officials had initially refused to publish the evidence after raising concerns that it could lead to ‘jigsaw identification’ of Mr Salmond’s complainants. 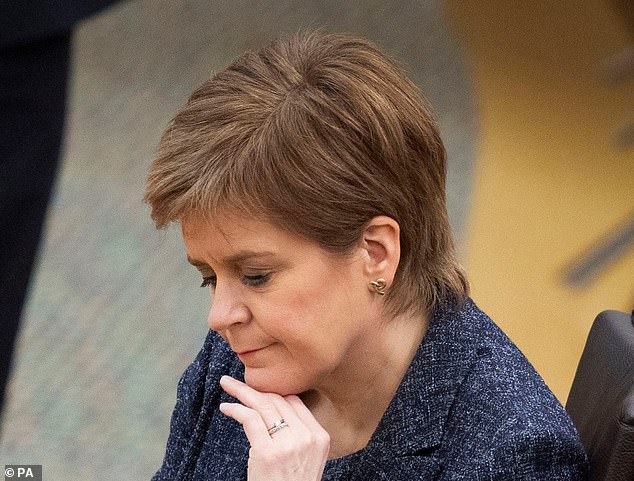 However, the Scottish Parliament Corporate Body (SPCB) agreed on Thursday that it could now go ahead with publication, paving the way for his long-awaited appearance to go ahead.

Presiding Officer Ken Macintosh yesterday defended the decision after it was condemned by Rape Crisis Scotland.

In a letter to Mr Macintosh and inquiry convener Linda Fabiani, Rape Crisis Scotland’s chief executive, Sandy Brindley, said: ‘I write to seek urgent reassurances that parliament intends to uphold the contempt of court order which is in place to protect the anonymity of complainers from the criminal trial.

‘We are extremely concerned that this decision is being taken without the legal basis to do so.’

Mr Macintosh also said: ‘I cannot stress how important it is that the parliament fulfils its obligations in respect of not identifying – directly or in combination with other documents in the public domain – complainers from the criminal trial.

‘The treatment of the complainers from the trial has been intolerable, particularly online. They have been hounded, identified online and had threats made against them.

‘I am clear that if the parliament publishes anything which could lead to the identification of any of the complainers, you will be directly responsible for putting their safety at risk.’

In a letter of response yesterday, Mr Macintosh said he does ‘fully recognise the concerns’ raised. However, he said that he could offer reassurance on the issue.

‘As has been made repeatedly clear by the SGHHC [Scottish Government handling of harassment complaints] committee itself, protecting the identity of the complainers in this case, as in any such case, is of vital importance to the parliament,’ Mr Macintosh said.

‘Furthermore, I can assure you that SPCB entirely supports the role of the court in putting in place orders to provide such protection.

‘The parliament will, of course, comply with the terms of these orders when conducting its scrutiny role.

‘I am further assured that the SGHHC committee will continue to focus on safeguards to ensure that it operates within the terms of its evidence handling statement as it carries out the important function given to it by parliament.’

Mr Salmond was acquitted on all 13 charges of sexual assault, including attempted rape, after a trial in March last year.