‘For Sunderland fans, this team will be heroes and remembered forever’: Alex Neil ‘content’ to revive a ‘fallen giant’ after the Black Cats clinch promotion to the Championship with victory over Wycombe at Wembley

Alex Neil was delighted to bring the good times back to Sunderland after they returned to the Championship for the first time in four years.

The Black Cats deservedly beat Wycombe 2-0 in the Sky Bet League One play-off final at Wembley, with goals from Elliot Embleton and Ross Stewart sealing promotion in front of 46,000 fans.

Those supporters have not had it easy in recent times, with back-to-back relegations and four years of third-tier obscurity.

Neil, who was appointed in February following Lee Johnson’s surprise sacking, was proud to be the man to reverse the slide.

‘When you come to a club like Sunderland, people love a fallen giant and love to stick the boot in,’ he said.

‘It was such a challenge for me to come here because this club has hoovered up managers over the last four years, but I have always had confidence I could go to a big club.

‘I’m not the one dancing around, people think I’m miserable but I’m not, I’m content. I’m extremely satisfied I have been able to deliver so much to so many people that it matters to and that for me is the most important thing, because it has been tough for this club for a few years. 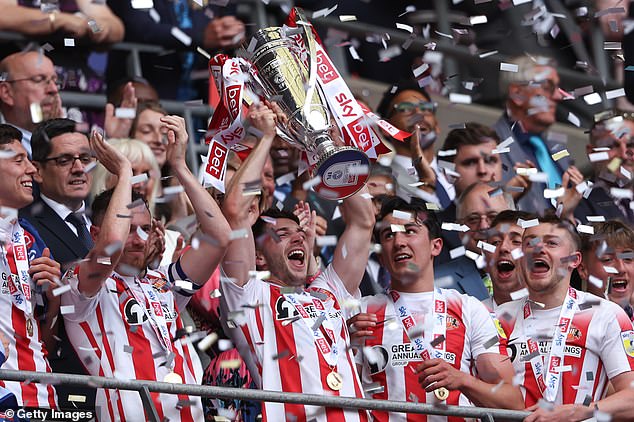 ‘The team-talk today was talking about moments in your career, this is your moment in time, you could be a hero. For Sunderland fans, this team they will be heroes and they will be remembered forever and I’m so, so pleased for them.

‘It has been a really good day for us. That is the most pleasing thing for me that you could imagine.’

It was a deserved success at Wembley, with Embleton’s early drive putting them in front before Stewart’s 26th goal of the season sealed promotion late on.

For Wycombe, their hopes of an instant return to the Championship were dashed and boss Gareth Ainsworth had no issues with the result. 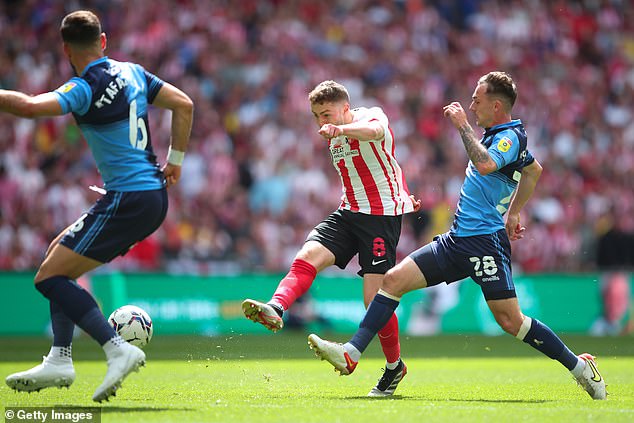 ‘They definitely had the spoils early on and got the goal, then the game was very close.

‘The second goal really killed it off, that was a sucker punch we took. We have played better than we did today and unfortunately on the big occasion Sunderland were the better team.

‘We have probably got away with that a few times this season, but today we have to take that on the chin and regroup for next year. 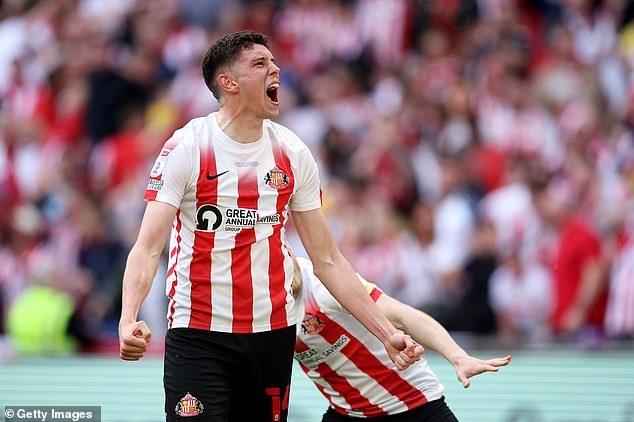 Ross Stewart celebrates his goal, which made it 2-0 to Sunderland at Wembley on Saturday

‘We have got the best squad I have ever had at the club, we will build resilience from this. I am so proud we amassed 83 points in League One. If we can do that again next season we will be fine.’

The match marked 40-year-old Adebayo Akinfenwa’s 756th and final appearance of a long career as he heads into retirement.

‘He is going to be a big hole. We are really proud to be the club Akinfenwa called home, that is really a proud moment for me.’