ALEX BRUMMER: Unless goods and services exports are pulled back from the doldrums future prosperity will be elusive for Global Britain

There has been no more significant happening in the last week than the reopening of the transatlantic air corridor. The sight of families reunited touched heart strings.

We shouldn’t forget the lengthy closure came close to destroying IAG-owned British Airways, and Virgin Atlantic, and has been a dangerous block on British enterprise and trade.

The United States is by a long chalk the UK’s biggest trading partner. Two-way trade was worth £229.9bn last year, and has increased by 11.6 per cent since 2018.

Stuck: It looks as if UK exporters are struggling to benefit from surging international demand as the world bounces back from Covid

The UK had £379billion invested in the US in 2019, making it the paramount destination for corporate Britain. Opening up America is vital if Boris Johnson’s vision of a more global Britain is ever to be realised.

Much is made of the coolness of Joe Biden’s administration to a UK-US trade pact amid hints that Britain could become part of the wider US-Mexico-Canada Agreement (USMCA).

No one should lose sight of the fact that, trade pact or not, when it comes to business the special relationship is robust.

Financial bonds between the City and Wall Street are unbreakable as we saw when the biggest beasts of New York finance such as Larry Fink of Blackrock and Jamie Dimon of JP Morgan travelled to Windsor to pay obeisance to the Queen ahead of COP26.

More complicated than assessing the UK’s global prospects is disentangling what is happening to UK trade with the EU.

The dispute over the Northern Ireland border is one aspect of a trade volcano still in danger of eruption. Trends are difficult to fathom because of a pandemic which has closed down whole economies in Europe and disrupted vital supply chains such as that for German cars sold to British consumers. 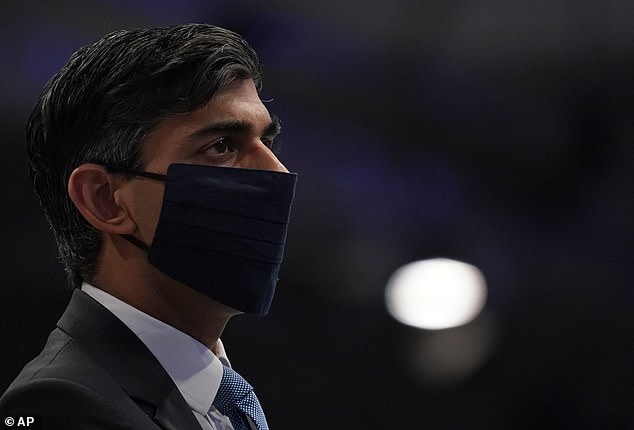 Downbeat: The picture that was painted by the Office for Budget Responsibility in last month’s report for Chancellor Rishi Sunak is downbeat

So far it looks as if UK exporters are struggling to benefit from surging international demand as the world bounces back from Covid. The value of UK goods exports did edge up to £26.4billion in September but it is still down on the 2019 average of £31billion per month.

Over the decades the UK’s sagging performance on goods exports is more often than not made up for by services.

However, there is no recovery to be seen so far, with exports at £50.5billion, some 13.4 per cent below pre-pandemic levels.

There are questions as to how big a part interrupted transport links have played in this with specialist engineering, architectural and professional teams grounded rather than out there in the field bumping elbows and securing new contacts.

The picture that was painted by the Office for Budget Responsibility (OBR) in last month’s report for Chancellor Rishi Sunak is downbeat. It recognises that in this early post-Brexit era the numbers are not encouraging.

UK exports to the EU slumped 45 per cent in January of this year. But ground had been recovered by August when overseas sales were 15 per cent down on when the transition period out of the EU ended.

The OBR cautions that if trade with the EU doesn’t eventually bounce back, the long-term hit to future productivity could be 4 per cent, or a whopping £80billion a year.

Much of this is supposition. What is indisputable is that the distractions of sleaze, the autumn fuel crisis and ever-so-critical COP26 mean that the global Britain agenda is paralysed. Unless goods and services exports are pulled back from the doldrums future prosperity will be elusive.

Sometimes the UK gets there first. Many of our great conglomerates – Hanson, BTR, Arnold Weinstock’s GEC and ICI – did the splits decades ago.

Prudential broke into three more recently (Prudential, M&G and Jackson Life) and Glaxosmithkline is speeding towards a spin-off of its valuable £40billion-plus consumer healthcare business.

The history of these break-ups is mixed with large swathes of UK manufacturing capacity falling into foreign hands and shifting overseas. But there have been fantastic success stories such as pharma innovator Astrazeneca, which derived from ICI.

Now the world is catching up. America’s once-dominant company GE is going for a three-way break-up, as is Japan’s electrical giant Toshiba. Johnson & Johnson is separating pharma from consumer healthcare.

Some may see the fast-moving consumer goods groups as the next frontier with Britain’s Unilever and Procter & Gamble ripe for the same treatment.

Just think of all those enormous investment banking and advisory fees waiting to be harvested.