A temporary shutdown of air traffic to Southern Africa is sensible enough until more is known about the latest Covid variant.

The reaction in financial markets is way overdone.

This is not March 2020 when there was no testing, no PPE, too few ventilators and none of the innovative immunology treatments which have emerged.

Hope: Among the lessons of the pandemic is the rapid speed with which the life sciences industry and drug regulators can move when faced with catastrophe

Among the lessons of the pandemic is the rapid speed with which the life sciences industry and drug regulators can move when faced with catastrophe.

The nasty hit to aerospace and hospitality stocks, which have gobbled up large dollops of new equity and debt in Covid-19, makes sense. Anything which disrupts airline operations hurts their ability to service borrowing and reward investors for patience.

The real story is the extraordinary bull market which has seen the S&P 500, the broadest measure of Wall Street, double in value. Against that benchmark, the sharp drop in the Dow Jones barely registers.

In the UK, the laggard FTSE 100 managed to crawl back to pre-Covid levels before the latest variant intruded. The buoyancy of equities has been accompanied by what the late Harvard economist Kenneth Galbraith called the ‘bezzle’.

Current manifestations include the boom in special purpose acquisition vehicles (SPACs), which have attracted £72billion of investment, and crypto-currencies. Before bitcoin values crumbled on ‘Red Friday’, the price had vaulted to $60,000.

A leading US investment banker on a Thanksgiving visit to London noted that the true value of bitcoin is closer to $60.

That has not stopped people trading and making fortunes. It is those left behind who will reap the most bitter harvest in the same way as holders of sliced and diced subprime mortgages in the financial crisis.

What is certain is that bull markets, jet-fuelled by low interest rates and bond buying, do not go on forever. The search for safe havens saw money flowing out of shares into government bonds in the latest frenetic dealings, sending yields on US Treasuries, Japanese government bonds, gilts and European bond prices down.

Given that bond market rates often set the pattern for official interest rates, the ruckus could discourage central banks from acting precipitately in the battle against inflation.

A key factor behind the surge in the cost of living has been energy prices. It has long been a contention that the oil markets are imperfect and speculators are responsible for the froth. The speed of the 5 per cent fall in Brent crude in latest trading is an indication that high prices are not completely about tankers stuck at sea and congestion at refineries.

The present panic is a consequence of coronavirus unknowns. But it also shows how far markets strayed from the fundamentals during a pandemic that still shows no real end.

KKR’S bid for Telecom Italia is hard to ignore. It is among Europe’s largest public to private deals, with a headline price of £9billion but actually worth £28billion when the debt pile is taken into account.

Italy’s prime minister Mario Draghi, formerly a Goldman Sachs banker, is keen to get the deal done on the grounds that private equity cannot do any worse in running a shambolic company allegedly involved in dodgy Serie A football deals. 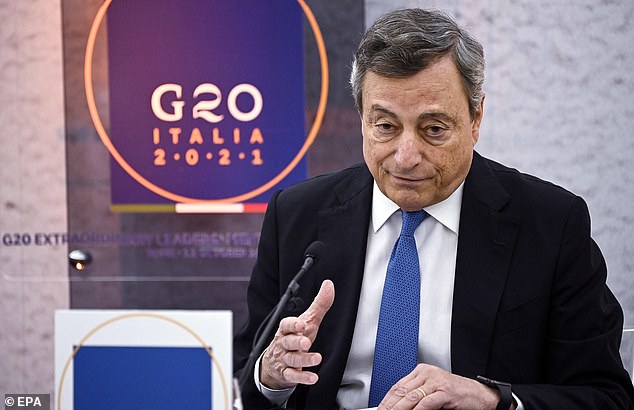 Keen: Italy’s prime minister Mario Draghi is keen for the KKR and Telecom Italia deal to get going

Under KKR, the plan is that the infrastructure arm, the equivalent of BT’s Openreach, would be spun out with the Rome government taking a stake.

The obstacles are formidable. Right-wing parties dislike the idea of Telecom Italia falling into the hands of overseas private equity sharks. And the company’s biggest investor, French billionaire Vincent Bollore of Vivendi, thinks it is being sold on the cheap.

Another French billionaire, Patrick Drahi, has still to play his hand, having snapped up 12 per cent of BT in June of this year.

He too would run into political roadblocks if he were to line up a full bid.

It is also seeking to buy the Lendlease minority in Kent’s Bluewater.