At last, some midsummer light at the end of Britain’s long and immensely damaging lockdown tunnel.

Boris Johnson’s Government has finally listened to this country’s businesses and given the seemingly doomed hospitality industry a chance of survival by easing the stifling two-metre rule.

And finally, those of us with wild, out-of-control hair can book a trip to the hairdressers. 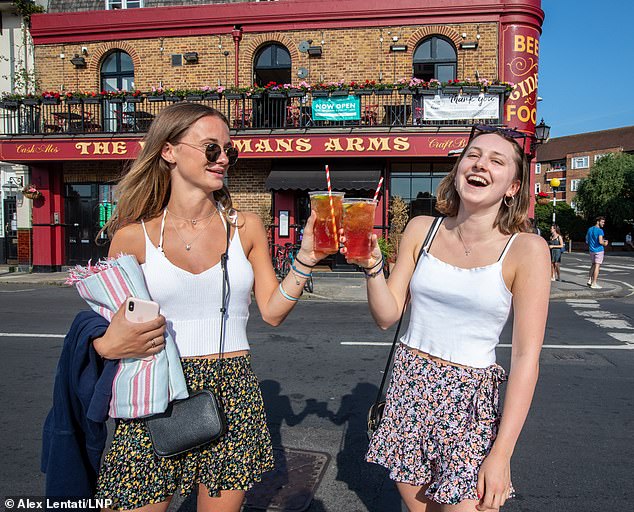 Mr Johnson announced that pubs can reopen again after July 4, meaning takeaway pubs such as the Watermans Arms in south west London (pictured) can start serving as normal again

As if that were not comforting enough, yesterday one of the key indicators of the nation’s economic health offered the first green shoots of recovery.

Despite the economy being in lockdown, the purchasing managers’ index (PMI) has risen since last month – a clear sign that manufacturers have started firing up mothballed production lines, and the services sector, so critical to the UK’s economic prosperity, has started to spark again.

On top of that, more good news can be found in the signs of life among the sclerotic economies of our European neighbours, which remain the biggest combined market for British goods and services.

But while many will be toasting the easing of lockdown, perhaps with an uplifting, socially distanced pint of beer with their reunited family, no one should kid themselves that life in the UK, household incomes, shopping or work will be returning to anything like normal.

For while the generous financial support provided by Chancellor Rishi Sunak and Bank of England governor Andrew Bailey was designed to hibernate businesses without too much long-term damage, I fear that the very necessary effort to keep the NHS functioning has done immense and unrecoverable harm to the UK’s normally resilient economy. 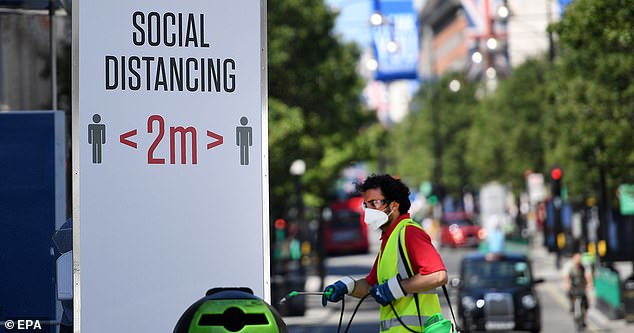 The Prime Minister announced that the two-metre rule (pictured) will be halved, but that may not be enough to get the hospitality industry fully up and running again

In fact, I suspect that the easing of the two-metre rule will not be enough for the hospitality industry to fully revive itself, while poorly handled quarantine rules have enfeebled the £145 billion tourism sector and desolated the UK’s world-beating airline and aerospace industries.

Of course, the economy will eventually recover from the trauma of the pandemic measures, but there will be much pain along the way.

Retail is a case in point. As this paper has repeatedly pointed out, traditional non-food shopping was suffering before lockdown under the weight of sky-high business rates, online shopping and surging utility bills made more expensive by mandatory green measures.

The lockdown, despite a welcome year-long lifting of business rates, has only quickened this deterioration.

Almost every major retail chain is shuttering scores of outlets. Meanwhile, it has been a boon for online retailers such as Boohoo and Asos.

Yet while these online firms may have acquired the stock market values once enjoyed by dowagers such as Marks & Spencer, they do nothing for the health of the high street.

As for the manufacturing sector, we are already seeing unemployment on the rise, including in formerly redoubtable British companies such as Rolls-Royce, British Airways and Bentley.

It is highly likely that a significant slice of the nine million workers currently taking advantage of the furlough scheme are on track for redundancy.

The Bank of England recently forecast that while Britain went into lockdown with 3.7 per cent of the workforce unemployed, the figure will rise to 9 per cent, or more than two million people on the dole.

And that’s before one considers the 330,000 school leavers and the 100,000 new graduates who will soon be on the hunt for jobs. 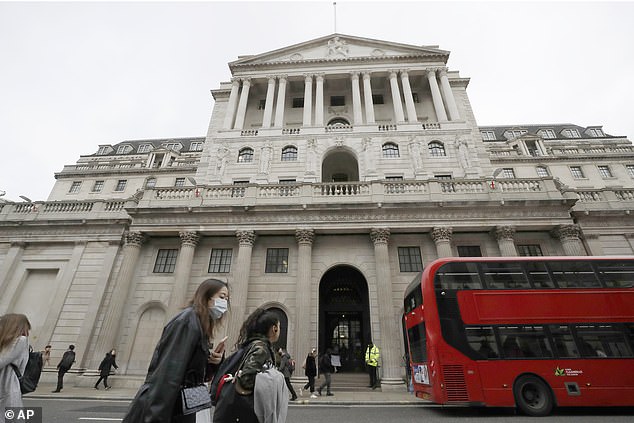 The Bank of England (pictured) revealed that 9 per cent of Britain will be unemployed due to the pandemic, with the UK set to borrow more than £300 billion to help the economy

As for the bill that will need picking up following the Government’s generosity, it does not bear thinking about.

This year alone the UK will borrow upwards of £300 billion and the national debt – the Government’s accumulated borrowing – will be at the same level as total national output.

Next year borrowing will come down sharply, but it will still be well in excess of £100 billion – more than twice where it was before this catastrophe descended.

So enjoy the return to a near-normal British summer while you can. But as you raise that celebratory pint, prepare for one almighty financial hangover.