A school uniform for £4.50: Aldi launches ‘Britain’s cheapest ever deal’ complete with a sweatshirt, two polo shirts and trousers or a skirt

The budget supermarket is offering a bargain bundle which includes a sweatshirt priced at £1, a two-pack of polo shirts (£1.75) and trousers or a skirt (£1.75) for under a fiver.

As well as day-to-day uniform, Aldi will also sell PE kits and shoes, with the retailer kickstarting a price war before the summer term has even finished.

The bundle deal, along with its complete Back to School range, will launch online for preorder on July 18 as one of its Specialbuys.

Aldi has launched the UK’s cheapest ever school uniform deal, with a complete set costing just £4.50. The budget supermarket is offering a bargain bundle which includes a sweatshirt priced at £1, a two-pack of polo shirts (£1.75) and trousers or a skirt (£1.75) for under a fiver

It will then be available to buy in stores from July 22, giving parents time for prepare for September well in advance.

All items, which are designed for primary school age children (aged four to 12 years old), now come with a new 150 day satisfaction guarantee.

This year’s range sees the continuation of Aldi’s partnership with Cotton made in Africa (CmiA), which guarantees that only the highest quality, sustainably sourced cotton is used.

The range also uses recycled materials, with the aim of being kind to the planet as well as shoppers’ bank balances.

Aldi UK director Julie Ashfield said: ‘We know how financially challenging the back to school period can be, which is why just like in previous years, we’ve worked hard to offer families top quality products at the lowest possible prices.

‘We’ve announced the launch of our Back To School range earlier in the summer to reassure parents that they can get their little ones kitted out for the school year early, and leave them to enjoy the rest of the summer holidays which many missed last year.’ 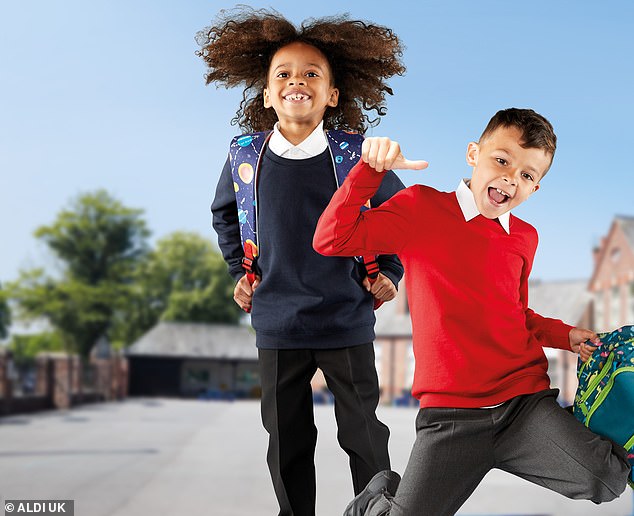 All items, which are designed for primary school age children (aged four to 12 years old), now come with a new 150 day satisfaction guarantee

The price of school uniforms is set to fall across the board from September as the new Education (Guidance about Costs of School Uniforms) Bill comes into force.

It wills save parents hundreds of pounds a year as branded clothing from a single supplier can cost an average of £340 a year for secondary schools and £255 for primaries.

Mark Russell, chief executive of The Children’s Society, said in March: ‘Expensive school uniforms have long been a burden for low-income families.’

Last year Sainsbury’s came out on top as the best British store to buy new school uniform, according to a study.

Parents were able to purchase a new whole set of schooling attire for just £15 – £30 cheaper than John Lewis, which proved to be the most expensive in a comparison of seven British retailers.