Her breast implants made her so sick, Carlyn Gould thought she might die.

“I could barely function day to day or care for myself or my children and I was fearful that I was going to go to sleep and never wake up,” said Gould, from Okotoks, south of Calgary.

“I was deteriorating at such a rapid rate that I thought I was going to die.”

Gould and other Alberta women are working together to bring attention to breast implant illness, which they say caused them severe autoimmune disease symptoms.

They’re demanding better recognition of the illness within the medical profession.

“My medical doctors never connected that it could have been my breast implants until after the fact,” Gould said.

Dr. Jan Willem Cohen Tervaert, who heads the division of rheumatology in the University of Alberta’s faculty of medicine and dentistry, said a growing body of science is linking breast implants and autoimmune diseases.

“There are new kinds of studies that now convincingly show that there is something happening,” Cohen Tervaert said, adding that women can experience symptoms with either textured or smooth breast implants.

Studies have also shown that 60 per cent of women with breast implant illness see their symptoms disappear after having the implants removed, Cohen Tervaert said.

“They’re nearly completely cured, and the remaining patients generally do much better.”

Gould’s numerous symptoms included severe anaphylaxis that restricted her breathing and swallowing. Her health deteriorated to the point where her cognitive abilities were affected.

“I distinctly remember looking at a red light and not remembering what it meant.”

Gould started suspecting that her breast implants were making her sick after speaking with women with similar stories, and doing her own research.

She had her implants removed 15 months ago, and since then has tracked her recovery. Her cognitive impairment is gone, as are most of her symptoms.

Carlyn Gould documented her entire recovery. The top pictures were taken over the three days leading to her breast implant removal surgery. The bottom photos were taken four, 21, and 24 hours post-surgery. (Carlyn Gould)

‘I must be going crazy’

Maciver, 34, had been searching for years for the cause of her autoimmune problems.

Her symptoms began shortly after she got breast implants in 2010. She has had recurring urinary tract infections, sinus infections, poor circulation, back pain, migraines and fatigue.

“My kids have only known me with some sort of illness,” she said. “Their mom is too ill, or too agitated at the noise to spend time with them.”

But finding a doctor that believed her worsening symptoms were real was a difficult process, Maciver said.

After finally finding a supportive surgeon, Maciver made the decision to have her implants removed. Her surgery is scheduled for April 17.

The cancer is a rare but serious type of non-Hodgkin’s lymphoma that affects the immune system and may develop many months or years after a breast implant procedure.

“I don’t have faith in my medical system anymore,” Maciver said. “Women need to know.”

Plastic surgeons are more aware now of the emerging science around breast implant risk than they were a decade ago, said Dr. Rob Harrop, president of the Canadian Society of Plastic Surgeons.

“Those discussions should be happening,” Harrop said.

The Calgary-based pediatric surgeon expects the information to be given in person and in writing.

The association is working closely with Health Canada, which recently announced it was considering taking Allergan’s Biocell textured breast implant off the market.

“There are very few plastic surgeons using these implants for cosmetic breast augmentations at this point, as a result of this very issue.”

The risk of developing BIA-ALCL is about one in 3,000 for women who have received a textured implant, like Allergan’s Biocell, said Harrop.

Allergan’s textured implants have been linked to 24 of the 28 confirmed cases of BIA-ALCL in Canada. 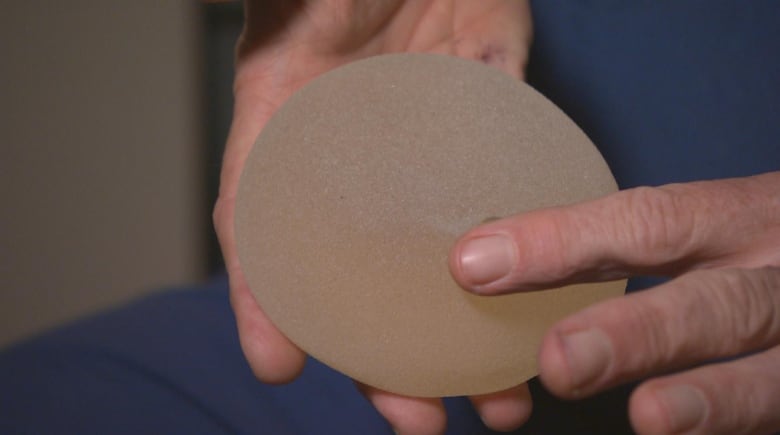 Health Canada announced Biocell textured breast implants, made by Allergan, could soon be taken off the market. (Nicolas Amaya/CBC)

‘Something had to be done’

Dawn Criss, who lives in Parkland County, west of Edmonton, is one of the 28 Canadian women with a confirmed case of BIA-ALCL.

Diagnosed in 2017, her medical problems started three years earlier with ulcerative colitis, an autoimmune disease of the digestive tract.

“It nearly killed me,” Criss said. “I ended up in hospital basically on my deathbed.”

Criss, 49, didn’t suspect that her breast implants were the cause until her cancer diagnosis.

“I started putting two and two together because lymphoma is actually a cancer of the immune system, and here I was. I’d had this autoimmune disease for the last four years,” she said.

She estimates that about 90 per cent of her colitis symptoms went away after her implants were removed in January 2018.

“That’s when I realized that something had to be done.”

Criss embarked on an international campaign to inform other women and health authorities of the risks associated with breast implants. Through Facebook support groups, she has met thousands of women who suspect they have breast implant illness, but aren’t able to receive care.

“They’re being lost in the system,” Criss said. “They’re having to search for surgeons on their own. I think they’re very abandoned.”

Criss is also pushing for a national registry of women who have breast implants and side-effects.

Harrop, of the of the Canadian Society of Plastic Surgeons, agrees that a tracking system is needed. The association is working with Health Canada to create one, he said.

“I think that’s the best way for us to get good evidence on this topic.”