Albanian man, 42, is shot dead by masked gunman in front of his British girlfriend in bar near Benidorm in ‘revenge hit linked to drug trafficking’

A man has been shot dead in front of his British girlfriend in a professional hit at a Spanish bar.

The 42-year-old Albanian was shot dead on the terrace of a popular Brit expat and holiday bar called The Orange Tree by a masked gunman who fled the scene after ambushing him.

Local press have described his partner, who was sat with him on the bar terrace when he was attacked, as British.

The victim was known to police who are investigating the killing as a revenge murder linked to drugs trafficking.

The dead man and his partner have not been named and the owners of the bar in Alfas del Pi near Benidorm, which does English breakfasts and Sunday lunches and shows Premier League football on a large screen, have not yet made any comment.

Police confirmed yesterday the dead man was Albanian and no arrests had yet been made but ahead of the local reports stating his partner was British, said they had no information they could release about her nationality.

A spokesman for the Civil Guard, which is probing the murder, said there were ‘few witnesses’.

The victim was pronounced dead shortly before midnight on Friday after failed attempts by a waiter from a nearby bar and emergency responders to save his life.

He is said to have been shot at least five times from close range.

Investigators are understood to be focusing on the theory that the murder is linked to a police operation against drug dealing last month which led to three raids including one at an unnamed bar in Alfas del Pi. 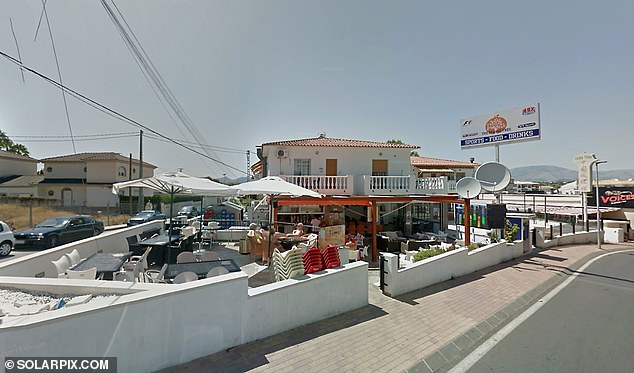 The victim was known to police who are investigating the killing as a revenge murder linked to drugs trafficking. Pictured: The Orange Tree Bar where the shooting took place

Detectives seized cocaine and Viagra-type pills during the searches. The operation at the bar is understood to have resulted in the arrest of an Albanian man. A British national and an Irish national were said to have been among the six people – three men and three women – held at the time.

They were all released on bail pending an ongoing court probe after appearing before an investigating magistrate.

The Orange Tree has been described in the past as the sister bar of famous Benidorm sports bar the Ibrox Bar, which is still advertising the Alfas de Pi bar’s menu and drinks offers.

The bar where Friday’s shooting occurred was up for sale earlier this year, although it was unclear today whether it has new owners.

The sale ad said: ‘This fantastic bar is popular and frequented both by locals and tourists all year round.

‘Under the current owners of the last two years, The Orange Tree has become a hot spot, serving great food, great drinks and providing live and sports entertainment.’

It added: ‘For those sporting events, The Orange tree has one of the largest screens in town of three meters, and a further 65 inch TV inside.

‘The bar is licensed from 8am until 2am, giving a lot of scope. The business is being sold due to the owners retiring and comes fully equipped, ready for the new owners to walk in and hit the ground running.’