An Albanian drugs lord who has been deported from the UK three times has been jailed for more than seven years for heading a lucrative ‘Deliveroo style’ cocaine  delivery service in Kent.

Drini Dosku became ‘the leading light’ in the sophisticated and professional plot to supply residents in the affluent stockbroker towns of Tonbridge and Tunbridge Wells after his early release from prison in 2014 for drug dealing.

He was freed on agreement with the authorities he would return to his native country for good.

But the 35-year-old illegal immigrant was able to sneak back in, as he had done so on two previous occasions since 2011.

He then took up a ‘managerial’ role in the class A drug enterprise which was said to operate ‘like a Just Eat or Deliveroo takeaway food delivery service’.

Albanian illegal immigrant Drini Dosku, 35, from Orpington, Kent, was jailed for more than seven years on Friday for his involvement in the sophisticated and professional ‘Deliveroo style’ drug delivery service

Over a nine-month period between March and December 2019, the turnover was ‘conservatively’ estimated at half a million pounds.

Dosku, known as Jimmy, was responsible for the day-to-day running of the UK end of the business, Maidstone Crown Court, Kent, was told.

He recruited couriers, provided false identities and accommodation, arranged hire cars and insurance and was in charge of the two valuable drug line phone numbers through which customers would order cocaine in £40 deals.

He paid the drivers ‘handsome’ wages of at least £1,000 a week, while he himself ‘profited substantially’, driving luxury cars including an Audi A5, Land Rover Discovery and a BMW 7 series.

In the seven years since his third deportation, Dosku has also fathered two children, aged five and 18 months, with his dental nurse partner here in the UK.

His barrister, Richard Paton-Philip, said he returned illegally ‘to better the prospects for his young family’. 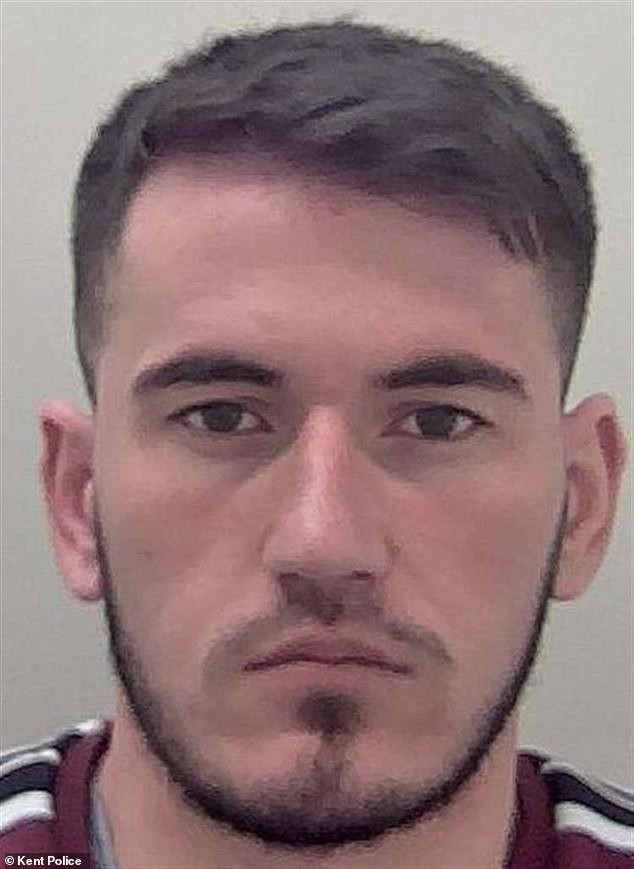 Dosku, of Northlands Avenue, Orpington, Kent, pleaded guilty to conspiracy to supply cocaine and was sentenced on Friday to seven years and two months’ imprisonment.

It is not known when he first came to the UK, having left his native country in 2004 and initially working in Greece.

But the court heard he was first deported in June 2011, having been jailed for 15 months in March that year for producing cannabis.

Within months however he had returned illegally, before being deported for a second time in August 2012.

An undeterred Dosku, who has no convictions in Albania, returned yet again and in January 2014 was convicted of possessing cocaine with intent to supply and jailed for 32 months.

But early release was offered on the basis he agreed to be deported and not come back, said prosecutor Patrick Dennis.

‘So he was again deported in August 2014 and has obviously come back, ending up being the leading light in this drugs conspiracy,’ he added.

‘In some ways it worked like a takeaway food delivery service, such as that provided by JustEat or Deliveroo – only they were supplying cocaine, not takeaway food. 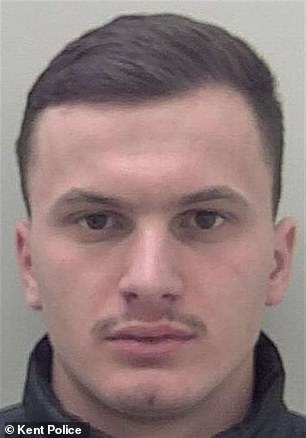 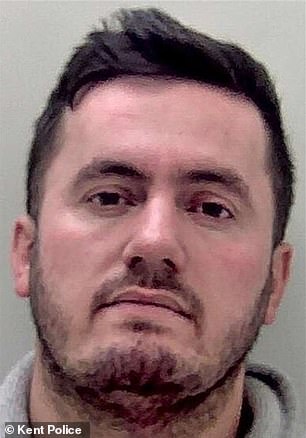 Shehu (left), who lived in the same house as Gjeci, was sentenced to four years three months

‘It was sophisticated, organised and professional criminality which turned over around half a million pounds. That is a conservative estimate and the profits reaped were substantial.’

The court heard an ‘extra layer of insulation’ was employed with the use of ‘platform numbers’ to protect the business if delivery drivers were arrested and their phones analysed.

While customers placed orders with the two drug lines, the platform numbers were used to communicate with the couriers and allocate postcodes.

‘Once the platform number had found a driver, the drug line would get back in contact with the customer to tell them how long it would be until their order was delivered, which of course has some similarity with food delivery services,’ said Mr Dennis.

‘But if a driver was arrested and his phone seized, the police would only become aware of a platform number.’

The enterprise ended however with Dosku’s arrest on December 19, 2019.

Passing sentence, Judge David Griffith-Jones QC said he was prepared to give Dosku ‘the benefit of doubt’ and accept there was ‘at least one general’ above him in the hierarchy, most likely based in Albania.

But he told Dosku: ‘You were the leading light, in charge of organising the day-to-day operations within the UK.

‘Any such person in Albania may have been responsible for organising the wholesale acquisition, perhaps importation, of the cocaine.

‘However, it was then made available to you and formed your stock for distribution in your organisation.’ 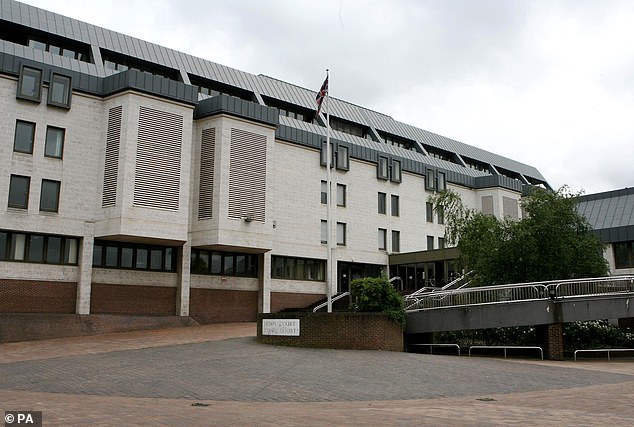 Dosku, known as Jimmy, was responsible for the day-to-day running of the UK end of the business, Maidstone Crown Court, Kent, (pictured) heard 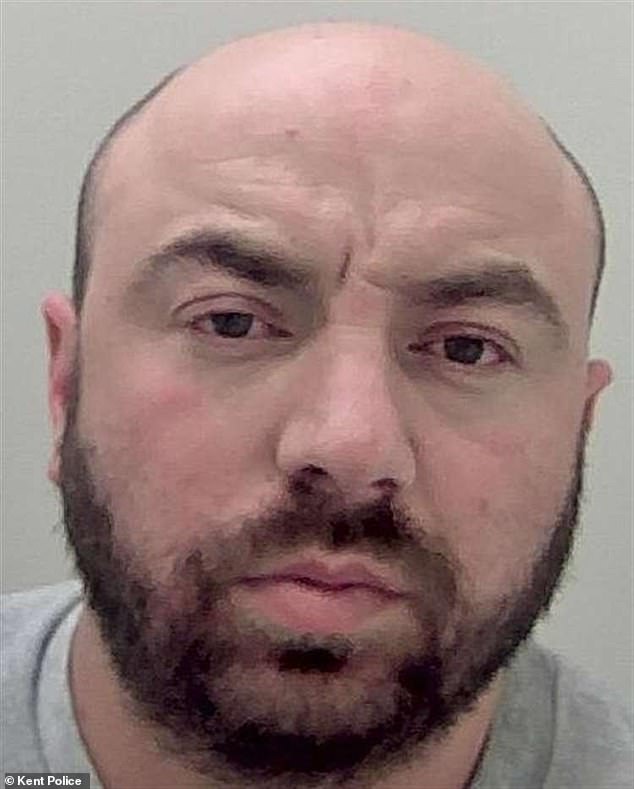 Eldjort Ajazi, 33, from Harrow, Middlesex, was sentence to three years and nine months after admitting conspiracy to supply

Gjeci, of High Street, Orpington, refused to give police the PIN to his phone but having cracked the code six months later they discovered ‘a considerable quantity’ of incriminating conversations with Dosku.

He had also tried to conceal evidence, including ‘accounting’ documents, a false ID card, grip-seal bags, scales and cocaine, in a bin and on the roof of the property he shared with Shehu as it was being raided by police.

All were Albanians in the country illegally, save dad of two Tobli who gained British national status after coming to the UK from Albania as a 13-year-old.

His involvement was limited to just three weeks, ending when he was stabbed and mugged of the cash and drugs he was carrying while making a delivery in Tonbridge.

Shehu was on prison licence at the time from a three-year sentence imposed for an unrelated drugs offence in 2017.

Six other delivery drivers who admitted possessing cocaine with intent to supply were all jailed at separate hearings last year.

Their sentences ranged between two years two months and three years nine months, bringing the total for all 11 defendants to 44 years and five months.

Judge Griffith-Jones commended both the ‘complicated and lengthy’ police investigation and the prosecution’s ‘detailed’ presentation to the court.

A confiscation hearing will be held later this year.