Did aliens visit Saudi Arabia thousands of years ago?

It’s a question that’s been thrown up by a mysterious gigantic rock there – that looks like it’s been cut in half by a laser beam.

One geologist says that the split could have been caused by ‘freeze thaw’ weathering, but others say the split is too precise and smooth to have natural causes.

The Al Naslaa rock formation, pictured, has become a popular tourist attraction thanks to its unusual split

The baffling sandstone boulder – the Al Naslaa rock formation – sits in Saudi Arabia’s arid Tayma oasis and has, not surprisingly, become a popular photo opportunity, along with being a hot topic of debate on the internet.

It is approximately 30ft (9m) tall and 25ft (7.6m) wide, and it has been embellished with a petroglyph – a rock carving made using a chisel and a hammerstone – of what appears to be a man and a horse.

However, it was the rock formation’s defining feature – its split – that has sparked fierce debate.

One user speculated that the divide was created when an alien messed ‘with a super laser pointer on some random planet their species found and accidentally cut a rock in half’.

A second theory suggests ancient civilisations were more advanced than previously thought. One YouTube video speculates that the formation is evidence of early ‘high technology’.

In the same vein, user Ricopantalones wrote in the online forum: ‘Why do we attribute aliens? There are mountains of evidence that state ancient technology was at a level significantly advanced from where we think it was. We are not on the first upward curve of technology in society. We are more likely on the second.’

Another compared the formation to the pyramids of ancient Egypt, which were constructed some 4,500 years ago. User NicholasPileggi claimed the split was carved in ‘the same way they cut the blocks for the pyramids – a rope and sand’.

User Borg2 theorised that the slit was crafted by someone with ‘a saw and lots of patience’. A few Star Wars references were also thrown into the mix, with one Reddit user wondering whether the rock was chopped in two by ‘someone testing a lightsaber’.

Bringing these theories back down to earth, geologist Cherry Lewis tells MailOnline Travel the split may simply be the work of Mother Nature. 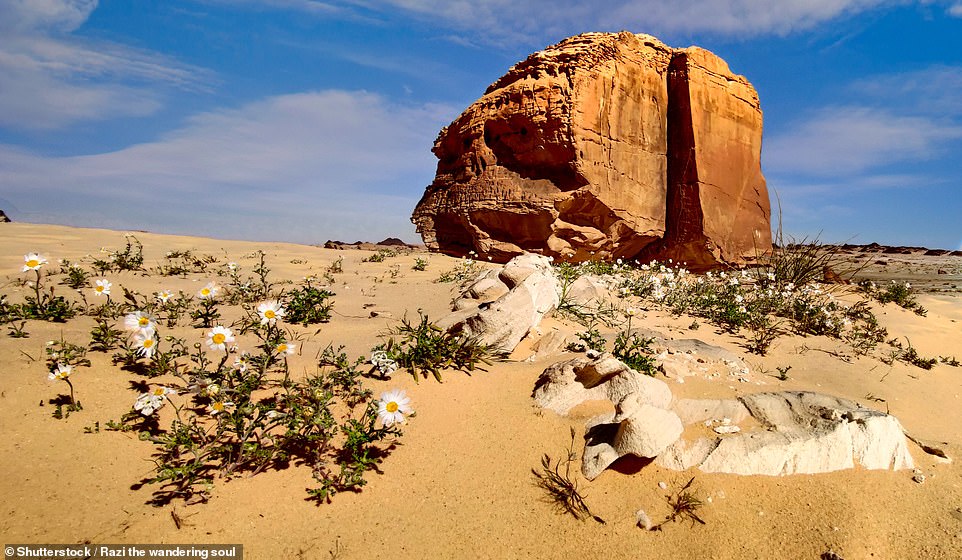 Lewis, who is an honorary research fellow at the University of Bristol, describes the unusual formation as a ‘remarkable sight’. She says: ‘It [the split] could have formed due to a process called “freeze-thaw” weathering, which occurs when water gets into a small crack in the rock. As temperatures drop, the water freezes and expands which causes the crack to widen and lengthen.

‘As the ice melts, water makes its way deeper and deeper into the crack. The process repeats itself over thousands, or even millions, of years until the rock eventually splits. This process, coupled with wind erosion – which, in a desert environment, is like sandblasting – could also explain why the boulder is standing on its own like that.’

Lewis says the ‘sandblasting effect could also have created the smooth front surface if that faces the prevailing wind’.

Given that past civilisations created Stone Henge and the sculptures on Easter Island with the most basic of tools, it doesn’t seem out of the question that it could be man-made

While weathering and erosion could be to blame, Lewis agrees there may be truth to the theory the rock was painstakingly sliced by humans. She says: ‘Given that past civilisations created Stone Henge and the sculptures on Easter Island with the most basic of tools, it doesn’t seem out of the question that it could be man-made.’

Her verdict? ‘On first appearance, the crack looks man-made, as does the very smooth front surface, but I see a photo that shows a parallel crack on the back, so it is possibly natural.’

Geologist and geophysicist Professor Tim Reston of the University of Birmingham also shared his thoughts on the strange formation.

He tells MailOnline Travel the split is ‘probably a joint, which is a natural fracture in the rock typically caused by pressure release and expansion, formed when the rock layer was more continuous, and now left exposed by erosion of the surroundings’.

Reston adds: ‘If [it is] a joint it might have beautiful “plumose” structures on both sides of the crack – they look like feathers – unless these have been widened by wind erosion.’

The rock formation is an eight-hour drive from Riyadh, and it can be accessed by car. Archaeological digs in the area have uncovered flint that dates back to the 4th millennium BCE. Rich in history, Tayma was the residence of the Babylonian king Nabonidus in the mid-6th century BCE. The oasis, which featured on the trade route from modern-day Medina to al-Jawf, subsequently became a popular spot for traders.

The stretch of desert was mapped by Charles M Doughty in 1877 – he described his visit to the Tayma oasis in his 1888 book Travels In Arabia Deserta. The area later attracted French explorer Charles Huber, who visited the site in 1883.

Cherry Lewis is the author of The Enlightened Mr Parkinson and The Dating Game: One Man’s Search for the Age of the Earth.