Gore pictured at the World Economic Forum in 2019

2011: In an interview with Rolling Stone magazine, Gore compared the risks of climate change and the inaction of politicians to the 2008 economic crisis.

He said: ‘We ignored reality in the marketplace and nearly destroyed the world economic system. We are likewise ignoring reality in the environment, and the consequences could be several orders of magnitude worse.’

2015: Gore told an interviewer that climate change was similar to the struggle for civil rights in the United States.

Gore said that by having conversations about racism, the civil rights movement became successful. He added: ‘That happened in millions of conversations, and slowly the conversation was won.

He went on: ‘And we still have racism, God knows, but it’s so different now and so much better. And we have to win the conversation on climate,’ according to Fox News. 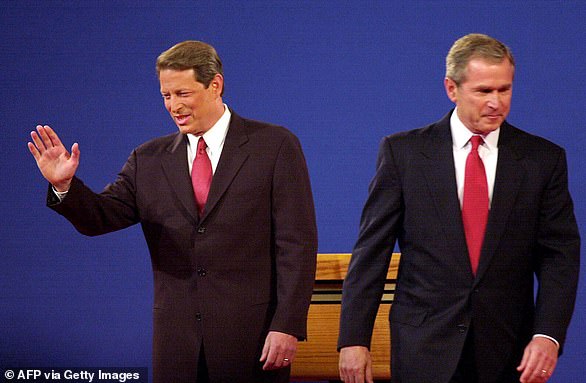 2019: The New York Times published an op-ed penned by Gore in which he wrote: ‘This is our generation’s life-or-death challenge. It is Thermopylae, Agincourt, Trafalgar, Lexington and Concord, Dunkirk, Pearl Harbor, the Battle of the Bulge, Midway and Sept. 11.’

January 2020: Gore doubled-down on this 9/11 comparison a year later telling World Economic Forum in Davos, Switzerland: ‘This is Thermopylae. This is Agincourt. This is Dunkirk. This is the Battle of the Bulge. This is 9/11. We have to rise to the occasion,’ according to The Hill.

July 2020: Just months later, Gore had a new issue to compare with climate change, Covid-19. In an appearance on ‘Late Night with Seth Meyers,’ Gore compared the pandemic that shut down the world to climate change.

He said: ‘The scientists who warned us about the pandemic included the very best epidemiologists and virologists in the world, and they warned us to prepare for a pandemic that was almost exactly like the one that we’re struggling with now.’

Gore added: ‘So when we hear the climate scientists arguing for even longer that we need to do something to stop the onrushing climate crisis, the lesson seems clearly that it’s best to listen to them.

2021: In November last year at the UN Summit on Climate Change, compared the world’s complacency on climate change to the way it failed to take seriously the threat of fascism during the 1930s.

Invoking Winston Churchill’s famous warning that ‘the era of procrastination (…) is coming to its close,’ Gore told the U.N. climate summit in Glasgow that the impacts of global warming would soon spur momentum for action.

‘We are now experiencing the consequences of the climate crisis in every part of our world,’ he said , echoing Churchill. ‘The scientists warned us that these consequences were coming.’