EXPRESS INFORMER > News & Politics > Airlines UK boss TIM ALDERSLADE: So how bad does it have to get before Boris acts?

Do you remember when this Government was talking up its vision of a post-Brexit ‘Global Britain’? It was a noble ambition, in keeping with our proud island history.

Then came the pandemic and Brexit took a back seat.

Now as we emerge from the aftermath and attention focuses on rebuilding the economy and, yes, on a Brexit agreement once more, ministers must be aware that there can be no Global Britain without a world-beating airline industry.

And yet one of Britain’s most important strategic sectors is disintegrating before our eyes. Another 1,150 job cuts were announced yesterday by Virgin, on top of the 3,000 already slashed.

British Airways has said it might ultimately have to reduce its payroll by an astonishing 12,000 individuals.

Heathrow has already completed a first round of redundancies and is now consulting with its unions, which could end in further job losses.

This is in addition to a record pre-tax loss of £5.4billion for the first half of the year posted last month by Rolls-Royce, which makes jet engines.

Just how bad does it have to get before action is taken?

The worst of the damage is being done because of the Government’s dogged insistence that we stick by the blunt instrument of quarantine rather than use the rapier of testing passengers for Covid-19 at airports. 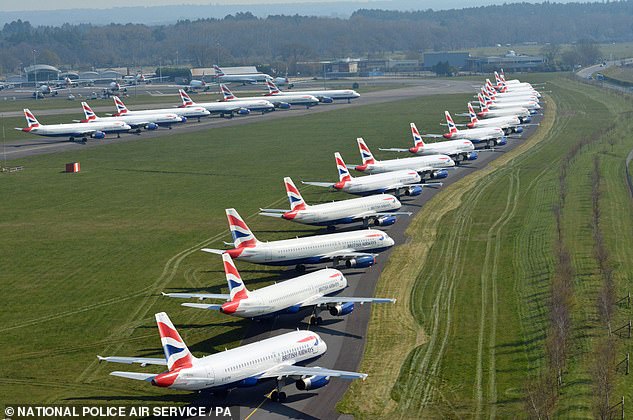 Pictured: British Airways aircraft parked at Bournemouth airport where they are expected to remain after the airline reduced flights amid travel restrictions and a huge drop in demand as a result of the coronavirus pandemic

The airline industry’s hopes that ministers might adopt a more flexible approach were dashed by the Prime Minister yesterday, who cited data suggesting airport testing picks up only 7 per cent of cases.

That outdated figure relates to limited data on the virus from the start of the crisis. It also relates to a ‘single test’ model on arrival, when the industry has been pleading for a two-step approach (in the first instance) to be adopted so they prove the efficacy.

The airlines my organisation represents – and British airports – accept that a test on arrival, followed up by a second test some five days later, would address many of the concerns around incubation of the coronavirus. People would be quarantined until two negatives have been provided.

We have also been clear that testing is not a ‘silver bullet’ but part of a suite of measures that will severely limit the spread of Covid-19 when travelling. So taking all of this into consideration, where is the risk in what we are calling for? And what reasonable excuse does this Government have in not greenlighting trials?

Germany and France are testing inbound passengers so that only those who are positive need to self-isolate.

As the Mail reports today we have a state of the art testing unit ready to roll at Heathrow Terminal 2. But the Government will not let us use it.

In Britain, all incoming passengers from countries not covered by exempted air bridges must spend a fortnight in self-quarantine, so why bother coming if you have to be holed up in a hotel room?

The state of affairs, and the lack of urgency to address a growing problem, is now undermining Heathrow’s once pre-eminent role as Europe’s global hub.

In the past few months, Charles de Gaulle and Frankfurt have each carried more passengers than Heathrow, the only time this has ever happened.

It is a chilling illustration of our relative decline caused by Britain’s Covid-19 response.

As an industry, we are all fully aware of our responsibility for the health of staff and passengers, and that will always be our number one priority.

But there is such a thing as being overly cautious. We have two crises running simultaneously.

One is the pandemic, the other is the economic consequences of that pandemic.

Now the pendulum has to swing back, as we work out how to bring our economy back to life at a time when we are also facing a prolonged recession.

Ultimately this has to be a political decision, taken by Boris Johnson, weighing potential risk to the nation’s health against the destruction of an industry that is key to the economy and to tens of thousands of jobs.

As the clock ticks down towards our final departure from the EU, we should be telling the world to believe in ‘Global Britain’.

But I fear that the message they are hearing out there today is that they would be better off in Frankfurt or Paris.