Airbus is ‘bleeding cash’ and its ‘very existence’ is threatened, warns chief executive after collapse in demand for air travel

Airbus is ‘bleeding cash’ and its ‘very existence threatened, the chief executive has warned.

Guillaume Faury issued the warning in a letter to the aerospace giant’s employees late on Friday, as demand for air travel has collapsed due to the coronavirus pandemic.

According to various reports, he wrote: ‘We’re bleeding cash at an unprecedented speed, which may threaten the very existence of our company.’ He added that it must ‘act urgently’ to survive.

The lockdown has decimated the aviation industry and several airlines are on the brink of collapse. Virgin Atlantic has already called for a £500million state bailout.

Passenger numbers have plummeted since the Foreign Office advised against all except essential travel.

It is estimated that 140million fewer passengers will take to the air this year, hitting the sector with an estimated £21.1billion in lost revenue.

A spokesman for Airbus said the firm does not comment on internal communications.

The coronavirus pandemic has led to airlines grounding the majority of their fleet.

Earlier this month, Airbus announced a plan to cut its aircraft production rates by around a third.

EasyJet has reached an agreement with the manufacturer to defer the delivery of 24 new aircraft. 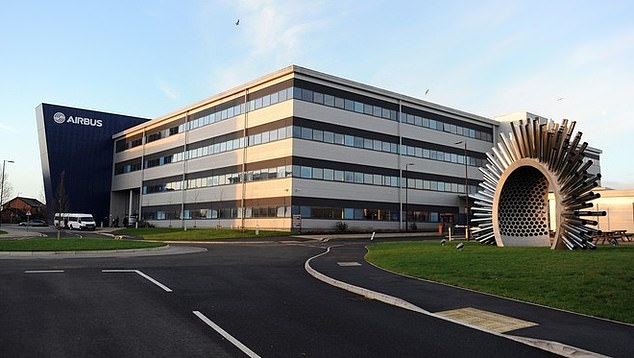 Barnwell House, the headquarters of Airbus in Filton, Bristol

Airbus employs 13,500 people in the UK, including in Broughton, North Wales, and Filton, Bristol, where wings for commercial aircraft are designed, tested and built.

The company is due to issue its financial results for the first quarter of the year on Wednesday.

It comes just days after budget airline  Wizz Air has become the first to restore flights from London to Europe.

Flights will be leaving London Luton for Tenerife, Lisbon, Budapest and other major cities from May 1.

Seats are priced from £16.99 but many of the countries they are flying to will refuse entry to foreign nationals.

The continent-wide coronavirus lockdown has seen European air traffic plummet by at least 90 per cent, according to IATA, as countries battle outbreaks.