Sex ban for aid workers: Government warns overseas staff they face ‘gross misconduct’ if they are found to be in relationship with disaster zone victims

A sex ban has been imposed on Britain’s overseas aid workers as the Government warns staff in relationships with a disaster zone victims face ‘gross misconduct’ proceedings.

Britain’s Foreign, Commonwealth and Development Office (FCDO) has banned sexual relationships between staff and those receiving aid, based on ‘inherently unequal power dynamics that can lead to increased vulnerability to sexual exploitation and abuse and sexual harassment if power is abused’.

It has also banned ‘sexual activity with children regardless of the age of consent locally, exchange of money, employment, goods, or services for sex.’

The official guidance up until now said that sex with beneficiaries of humanitarian aid was only ‘strongly discouraged’.

Nigel Adams, Minister of State for Asia said in a letter to the International Development Select Committee: ‘Safeguarding against sexual exploitation and abuse and sexual harassment remains a top priority for the FCDO and we will not hesitate to take swift action if any staff member or any organisation we work with fails to uphold our strict standards.’

Sarah Champion, chair of the International Development Select Committee, told the Telegraph : ‘Whilst I am pleased the Government have now agreed to make sexual relations with beneficiaries a sackable offence, it should have been in place from the start, not an afterthought when they are forced into adding it. 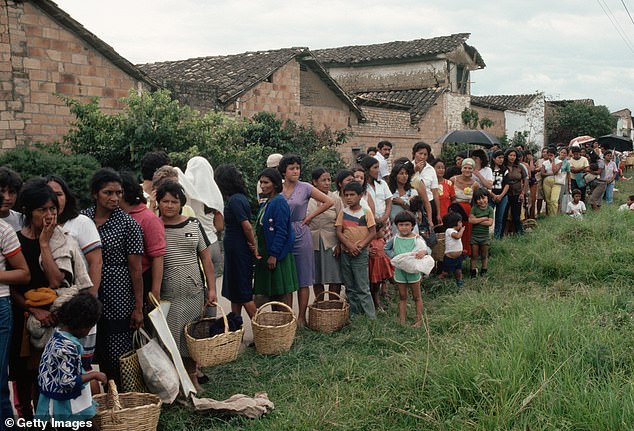 Britain’s Foreign, Commonwealth and Development Office has banned sexual relationships between staff and those receiving aid (file photo of victims of the  1983 earthquake in Popayan, Columbia)

‘Aid beneficiaries are by their very nature the most vulnerable people on the planet.

‘To say I was shocked when our inquiry found out Government staff were only discouraged, rather than banned, would be an understatement – I was appalled.’