Woman are given 10 percent less airtime than men during political discussions on CNN, Fox News and MSNBC because they’re constantly interrupted, an analysis by artificial intelligence shows.

The discovery was made by researchers at Rochester Institute of Technology who used AI to analyze 625,409 discussions hosted on the three news cable networks from January 2000 through July 2021.

The team believes their AI could be used during talk shows, interviews and political debates to identify a serial interrupter in real-time, but the study also reinforces previous research that found men interrupt women more to show their dominance.

AI analyzed thousands of discussions on MSNBC, CNN and Fox News which found woman are given 10 percent less to speak during political discussions because men interrupt them. PICTURED: MSNBC’s Joy Reid was repeatedly interrupted by Pastor Mark Burns during a segment

The research was led by Ashique Khudabukhsh, a computer scientist, who discussed the results in a report published by The Conversation.

It is apparent Schlapp is given more airtime to speak during the clip, as Navarro waited her turn to speak – but when she did, her male counterpart cut in with digs.

However, the now-fired Cuomo, did interrupt Schlapp several times during the discussion due to conflicting political views.

More recently in 2021, Brook Baldwin aired her grievances as she departed as an anchor on CNN, noting there is a lack of opportunities for women at the network. 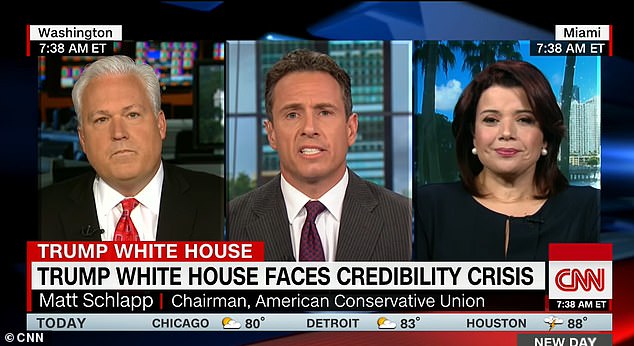 The technology revealed women received an average of 72.8 words per chance to speak compared to 81.4 for male speakers. During a segment with form CNN host Chris Cuomo (center), Matt Schlapp took over the conversation, leaving Anna Navarro to wait in silence

In 2018, MSNBC’s Joy Reid, host of The ReidOut segment, was discussing Trump’s statement about Africa being a place of ‘s***hole countries’ with Pastor Mark Burns, a televangelist.

Reid asked Burns to comment on Trump’s statement, in which the pastor replied ‘it was allegedly said.’

The MSNBC host attempted to give direct quotes from Lindsay Graham who confirmed the statement, but Burns interrupted her statements to the point where Reid had to say ‘excuse me’ as a way to signal Burns to stop chiming in.

During one of Sean Hannity’s segments nine years ago, Radio and TV talk show host Bill Cunningham and Tamara Holder, an attorney and Fox Analyst, debated whether Attorney General Eric Holder committed perjury in a trial about the Department of Justice’s seizure of phone records from the Associated Press.

Cunningham, incensed over what he felt was Eric Holder’s consistent mendacity, began screaming and jabbing his finger at the Fox analyst, who was sitting right next to him.

He also interrupted her nearly every time she tried to speak. 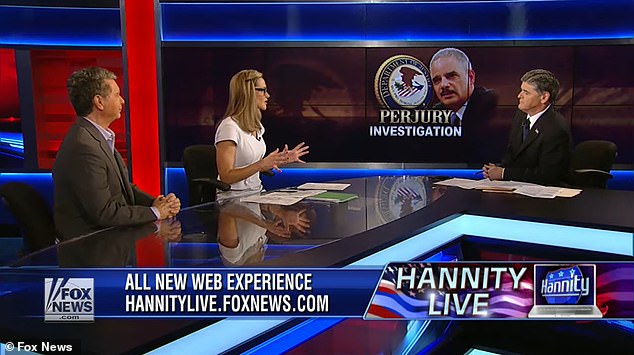 The team believes their AI could be used during talk shows, interviews and political debates to identify a serial interrupter in real-time, which may have helped a heated debate on the Sean Hannity show when Erick Cunningham aggressively interrupted Fox analyst Tamara Holder

The study was conducted by first computing the average number of words per line spoken by annotated speakers from all 275,420 transcripts pulled from the group of dialogues – these transcripts were found to include interruptions.

‘Comparing male and female speakers, we find that male speakers have a higher average word per line across all but one pair (Black/African American in political occupation) grouped by occupation and race/ethnicity,’ reads the study.

However, the AI also determined that the female group had an overall interruption rate of 39.4 percent compared to the male group of 35.9 percent.

The team looked out if a speaker’s political stance impacted their impulse to interrupt the conversation and it was those in the Republican party who cut in the most with a rate of 272 compared to 229 for Democratic speakers.

Democrats employ intrusive interruption 65.6 percent of the time when talking to fellow Democrats while this number is 74.8 percent against Republicans.