EXPRESS INFORMER > Business & Finances > After Kwarteng’s mini-Budget chaos… Are bonds back in business?

Late last month, it seemed that this would be the year when the word ‘bond’ – which traditionally inspired a feeling of reassurance – became associated instead with a sensation of mounting alarm.

Suddenly, however, some fund managers are taking a different view.

This is despite the 20 per cent decline since January in the Bloomberg Global Bond Aggregate Index, which is made up of these fixed-interest investments issued by companies and governments as a way of borrowing.

Bond prices have been hit not only by inflation, but also by successive interest rate hikes, including this week’s upward moves in the UK and the US.

In June, many investors were fleeing corporate and government bonds, as the threat of recession grew.

Yet, as this column reported, a few managers were tentatively putting money into corporate bond funds, which are the easiest way to get exposure to this area. Now, this trend is spreading, as the funds’ distribution yields grow more attractive.

Some of these managers are professing a level of amazement that they are contemplating bonds of any variety in the wake of the rout in this market.

But they point to the generous yields on offer in the sector that have resulted from the descent in prices. Phil Smeaton of wealth manager Atomos says: ‘These are some of the nicest return prospects we’ve seen for a long while.’

The steep decline means that prices may already reflect the possibility of a deeper economic downturn, as some experts argue.

David Zahn, head of European Fixed Income at Franklin Templeton, says: ‘The outlook going forward will be volatile, but it is now time to start building larger positions in credit.’

‘Investment-grade bonds, those with a credit rating of BBB or above, from companies like Aviva, BT and Vodafone, are yielding about 5.7 per cent,’ he says. 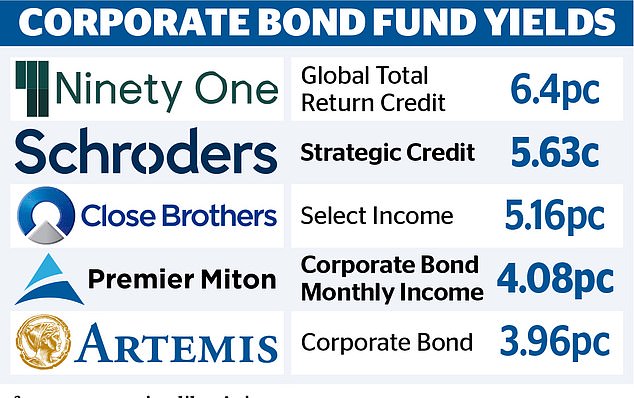 ‘If you go for lower-rated bonds, 11 per cent yields are available.’

Dan Cartridge, of Hawksmoor investment management, says that he and his colleagues have joined the corporate bond fund enthusiasts’ club.

‘Not so long ago, there were none of these funds in our portfolios,’ he says. ‘They now represent about 20 per cent. We’ve made this move because we believe that these funds can deliver a positive return over three to five years.’

The yields of 7 per cent-plus compensate for the additional risk involved in holding corporate bonds rather than gilts, taking into account the possibility of default. Cartridge says: ‘For a mix of long and short durations, we’re holding Artemis Corporate Bond, Close Select Income, Man GLG Corporate Bond and Schroder Strategic Credit.’

Chelsea Financial Services has also added Artemis Corporate Bond to its portfolios (the fund has stakes in such well-known names as Compass, Pepsi Cola, RAC and Rentokil).

James Yardley of Chelsea Financial Services says: ‘We have started to cautiously increase our stakes in corporate bond funds since the start of the year and we think they are a good long-term buy.

‘However, we still think yields could widen further, and so we are waiting for real signs of stress before we add aggressively.’

He points out that the Bank of England, which bought £20billion of corporate bonds as part of its quantitative easing programme, has yet to embark on the sale of this pile of debt.

Ben Yearsley, of Shore Financial Planning, is also making a foray into corporate bond funds, but with some circumspection.

‘This isn’t a one way bet, since, if interest rates keep on going up more than expected, gilts and corporate bonds will continue falling,’ he says.

The professionals who are embracing corporate bond funds have made a reasoned assessment of the prospects, endeavouring to shrug off recent unsettling events.

Following their example, I will be committing some cash to a range of funds. This is not a sure-fire money-making scheme, but at least anyone who is investing in the sector now can be confident that we have a government with an inkling of how the bond markets work and their vital importance.