EXCLUSIVE: AFL first as a Pie signs a pie: Collingwood’s Beau McCreery autographs a Mrs Mac’s pastry after win over Fremantle – as fan reveals bizarre dare that led to the hilarious moment

The price of a meat pie at the footy might be verging on the ridiculous, but one fan has taken it to an entire new level by getting his rat coffin signed by an AFL star so he can keep it as a memento.

Collingwood were impressive in their big AFL win over the Fremantle Dockers at Optus Stadium on Sunday, grinding out a 36-point win to get themselves back into the finals equation.

A handful of hardcore Magpies supporters were in Perth to cheer them on – and one gave new meaning to the term ‘diehard fan’.

As Magpies player Beau McCreery went over to the Collingwood faithful to thank them for turning out, he was shocked when supporter Kai Crisp asked him to sign a meat pie.

In other words, he asked a Pie to sign his pie. Clever – and probably unprecedented. 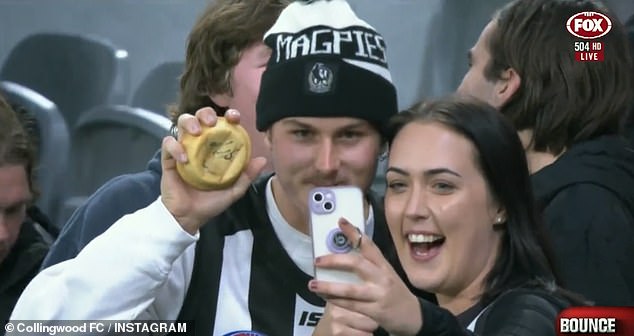 Crisp, 20, is a mad Collingwood supporter who lives in Busselton just south of Perth and travelled up for the weekend to watch the game.

It started as a dare between mates with Kai saying he would eat a pie every time the Magpies scored a goal.

‘By halftime they had five goals, I had finished my fourth pie and I had my fifth one just sitting there but it was getting to the point where I was feeling a bit sickly,’ he said.

‘One of my mates said “go and get the pie signed”. I wanted Jack Ginnivan but he ran off for the club song. But Beau stepped in and got the job done.

‘He was a bit confused but he didn’t ask many questions, he just got the job done. He missed the club song for it, that shows a bit of passion which we love.’

Next is the million dollar question: did Kai eat the pie signed by the Pie?

‘We went out later for a few drinks and I carried it with me. I’ve got it in a container and I am trying to figure out what to do with it next.’

AN ACTUAL PIE I CANT

I still haven’t stopped giggling at this.

The post attracted laughs from AFL supporters from all clubs, with Richmond supporter Tommie Jones was quick to declare: ‘I am not taking a tiger to the footy next week lol.’

It raises the question, is this the weirdest item an athlete has ever been asked to sign?

While it’s clever and well and truly a frontrunner, there have been some really strange ones over the years – mainly in the United States.

Take former American ice hockey star Karl Alzner, for example. He was once presented with a leather whip to sign by a woman. He asked why the whip, but she refused to say.

Klay Thompson is currently splashing threes for the Golden State Warriors in their NBL playoffs series against Dallas and he was once presented with a toaster to sign. Again, no idea why. It made an impression, though, because Thompson later invited the fan to the Warriors championship parade.

Former Los Angeles Kings goalie Jonathan Quick was once asked to sign a toasted cheese sandwich – with two bites taken out of it.

Saving the best for last, NASCAR driver driver Kasey Kahne was once asked to sign a dog. Why? It didn’t have much hair and the owner thought it seemed like a pretty good idea at the time.

While the pie signing was hard to forget, the win over the Dockers may turn out to be more memorable in terms of Collingwood’s finals hopes. 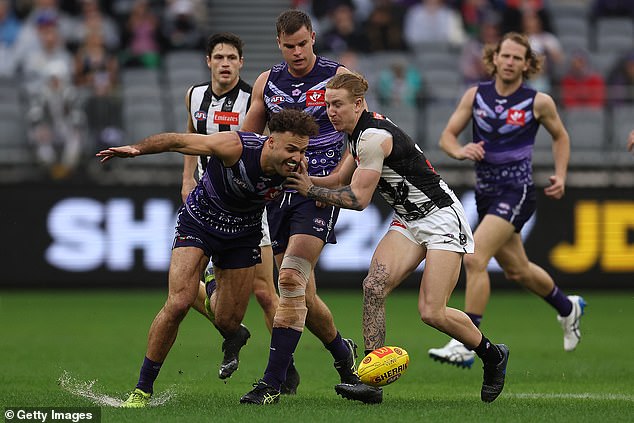 Bombers great and AFL commentator Matthew Lloyd said it was a faultless performance from the Maggies as they went back to the pressure-first style of footy that saw them shoot out of the gates to open the 2022 season.

‘It was a perfect performance by Collingwood,’ he told AFL.com.au

‘They got back to the pressure that they displayed in the first two or three rounds. They laid 89 tackles and 15-4 inside-50s. Dockers only laid four tackles inside-50.

‘They got them to the contest with pressure and then once they won, they were just so dynamic on the spread.

‘It was an outstanding display, well coached by Craig McRae. They just repelled them time after time.’