Don’t abandon us: More than 100 Afghan translators who worked with British troops beg Boris Johnson to help them find sanctuary in UK

By David Williams And Larisa Brown For The Daily Mail

More than 100 former Afghan translators for the British military have begged Boris Johnson and his ministers not to abandon them.

They warn that the Taliban will hunt them down if they are left in their home country – and that their deaths will shame Britain.

In a letter to be handed in to the British embassy in Kabul today, they warn of the dangers that those ‘who risked their lives and futures to help the British’ face.

Pleading for sanctuary in the UK, the letter – entitled ‘Interpreters’ Lives Matter’ – says those dangers are a direct result of working with British forces during 13 years of conflict.

It will be handed in by five former interpreters in Kabul, and also sent to Mr Johnson, Home Secretary Priti Patel and Defence Secretary Ben Wallace.

Former Afghan interpreter Wazir and his family, who are now missing in Iran. Their case is mentioned in the letter as an example of the desperation of translators and the risks they are prepared to take

The translators said they are the largest number of men who served with the British military to ‘speak with one voice’. All of those who signed are stuck in Afghanistan, desperate for a home in the UK.

They said the Taliban threat to their lives has massively increased because of peace talks that have resulted in the release of thousands of gunmen.

Dozens of men who worked for UK forces in other capacities have also signed the letter, providing their unique employment numbers given to them by the military when they signed up. This takes the total to 190 signatures. 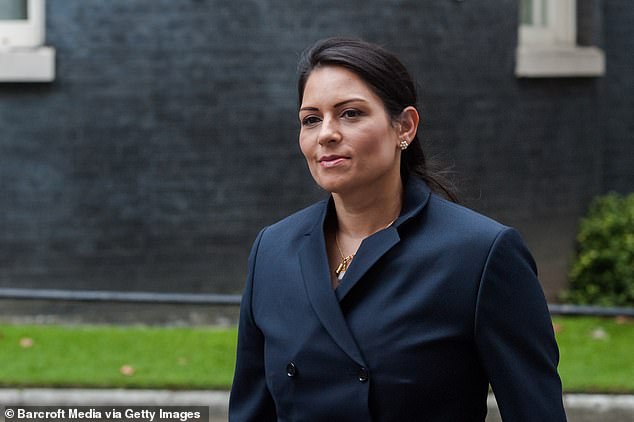 The letter will be handed in by five former interpreters in Kabul, and also sent to Mr Johnson, Home Secretary Priti Patel and Defence Secretary Ben Wallace

The letter states: ‘We believe the UK Government is not paying attention to the real problems we face. We… are being hunted because of our devoted service to the UK.

‘Now many of us are forced to live with fear of attack, blamed by the Taliban and insurgents for the deaths or imprisonment of their colleagues.

‘We receive death threats, our families have become targets, people will not employ us, our own communities have turned against us and we are forced to give up our family lands and move home many times.’

It is seven weeks since Wazir last saw his wife and four children as they fled from gunfire on the border between Turkey and Iran while trying to reach the UK.

The former interpreter, 30, became separated in the panic and near darkness from his wife Frishtah, 30, Mohammad, three, and daughters Tamaz, six, Iqrah, four, and Yususra, six months.

Their plight is referred to in the letter sent to the British embassy in Kabul today as an example of how desperate the translators are. Wazir said his life had become ‘unbearable’. He had been threatened with death by the Taliban and his family narrowly survived a rocket attack on his house.

‘We knew we can’t hide forever so we decided to try to reach safety in Europe,’ he said. ‘We had waited so long for help from the British but their hearts were cold.’

Wazir’s mother died during the crossing of Iran. He was arrested in the chaos at the Turkish border and deported to Afghanistan. Since then he has contacted the Iranian, Afghan and Turkish authorities, people smugglers and aid agencies for news of his family.

‘I am frantic with worry,’ Wazir said. ‘It is a consequence of working for the British and their denial of help that we were forced to leave Afghanistan. I would ask UK ministers to look at their wives and children and think hard about this.’

It warns the peace deal backed by the US will give power and influence back to the ‘same people you had us believe were the evil enemies’.

It adds: ‘Thousands of Taliban prisoners, who we helped fight and send to jail, are being released. They told us we were traitors and they would never forget. Are you now telling us it is safe to live side-by-side with them?’

The letter comes six weeks after interpreters say they were given renewed hope after the Government said both the Home Secretary and Defence Secretary recognised ‘their crucial service’ and a settlement would be found.

That followed pressure from the Daily Mail’s Betrayal of the Brave campaign which has highlighted the plight of dozens of translators and their families. The letter adds: ‘Interpreters are desperate to protect the life of their families.

‘More and more they are forced… to turn to traffickers to try and escape. It is a big risk but we have little alternative.

‘It is really disappointing to us that the UK government is prepared to offer help to hundreds of thousands of people from Hong Kong and migrants arriving daily but has forgotten its heroes, which probably total just 200.

‘If this continues, then who will trust UK forces in the future?’ The letter adds: ‘Our deaths… will bring great shame on the UK Government.’

Former frontline translator Tawab, 38, one of those who will deliver the letter in Kabul, said: ‘I hope this letter will remind the Government we are united in calling for a change of policy so that all those forgotten and left behind can live a life of safety in the UK.’ Tawab, a father of three girls, said freed Taliban ‘will see it as a matter of honour’ to seek revenge.

Rafi Hottak, who came to Britain with the help of people smugglers, will deliver the letter in the UK. He said: ‘The time for talk is over, the Government should act before it is too late.’

The Government said: ‘We remain committed to ensuring a fair system for the resettlement of Afghan interpreters. Claims are being processed as rapidly as possible.’