Leaving behind an Afghan translator who was promised safety 11 months ago was last night described as the ‘greatest betrayal’ yet of the brave interpreters who worked with the British Army.

Father-of-two Sayed was terrified and hiding with his family in Kabul yesterday, despite being told last year that he qualified for relocation to the UK.

Though told by telephone he had been approved in October 2020 and though he received written confirmation the following month, he was not called forward for evacuation before the pull-out of Western forces.

He believes a sudden late demand to prove the paternity of his two-year-old son may have delayed his case as the the Taliban rolled through Afghanistan.

Sayed is bitter that thousands who were granted relocation after him, and many more without permission to come to the UK, were flown to safety.

‘I am devastated and frightened, we are surrounded by the Taliban,’ the 31 year-old said yesterday. ‘We are lost and don’t know why we have been left behind. I have a family, what will happen to them if I am punished and my life is taken.’

Afghan translator and father-of-two Sayed (pictured) was terrified and hiding with his family in Kabul yesterday, despite being told last year that he qualified for relocation to the UK

Two days ago, Sayed said, Taliban gunmen went to his family home asking for him by name. He was not there because he has been regularly moving from one safe house to another.

Rafi Hottak, a former translator blown up on the front line in Helmand who has campaigned for fellow interpreters after claiming asylum in the UK, said: ‘This seems the greatest betrayal of all those who have been left behind.

‘Sayed was given false hope by being approved last year and been made to watch and wait while others approved after him – or not approved at all – were rescued at his expense.’

Retired Major General Charlie Herbert, a former commander of British forces in Helmand, said: ‘That Sayed was not evacuated last month is quite simply disgraceful.

‘At best this is incompetence, at worst, a level of callousness and indifference that reflects dreadfully on the Ministry of Defence.

‘The public are owed an explanation why hundreds of interpreters were not evacuated, and the MoD must be more transparent about who it prioritised above them for evacuation.

‘We are owed this clarity. The number of Afghan security forces evacuated ahead of the interpreters, for example, is rightly raising some questions.’

He added: ‘Sayed provided outstanding support to the armed forces in Afghanistan.

‘The MoD’s failure to even call him forward for evacuation speaks volumes for a relocation system that is broken and defunct. Heads should now roll.’

Sayed worked for UK forces between 2010-2012 and says he was told in October he was eligible for an ex-gratia scheme introduced by Defence Secretary Ben Wallace and Home Secretary Priti Patel. 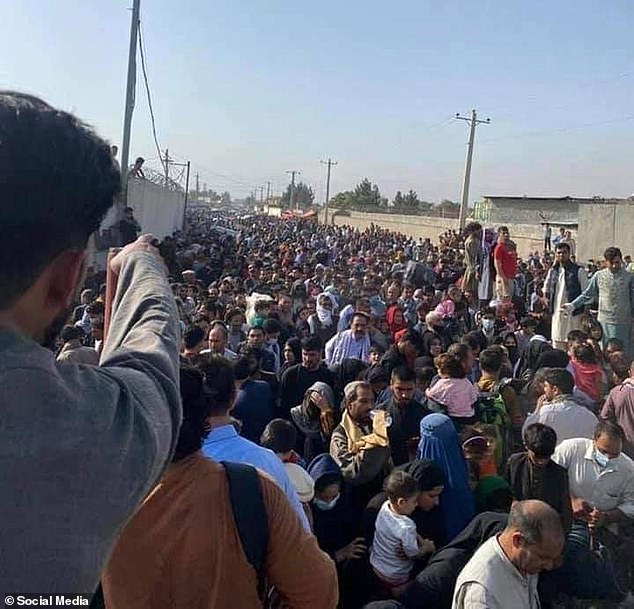 Sayed is bitter that thousands who were granted relocation after him, and many more without permission to come to the UK, were flown to safety. Pictured: Scenes outside Kabul airport

He said he was ‘relieved and delighted to at last have a chance to escape’.

In January he completed his biometric testing, proving who he was, and was placed on two weeks ‘notice to move’ in May. But he was then told his son, Mohammad, needed a biometric test.

This was carried out twice over a period of three months and then again a month ago. Sayed said no explanation was given for the delays.

‘I have waited all year for the call but just told not to worry… that my turn would come,’ he said yesterday.

‘When the Taliban came to Kabul I was certain we would be called but nothing…we just watched the planes leave without us. I wasn’t even called forward.

‘I went to the airport and the British hotel but was told I had to have an email with permission to fly, I emailed many times those I had been dealing with but no one replied. We were abandoned.

‘Many people who did not risk their lives for Britain like I did were put on the planes without biometrics, without being directly threatened by the Taliban like I have been.

‘They are safe in England and we are just waiting, waiting…hiding, hiding. We were the first who were eligible… but they chose not to rescue us.’

On Monday, Sayed said he received his first communication from any British official in nearly three weeks when a woman called from a ‘blocked’ number saying she was from the Home Office asking if his phone and email address still worked.

He said that it did and was told to ‘stay safe’.

No further instructions, information or a point of contact were given, Sayed claimed.

An MoD spokesman said: ‘We worked tirelessly to safely evacuate as many people out of Afghanistan as possible.

‘We will continue to do all we can to support those who have supported us, and our commitment to those who are eligible for relocation is not time-limited and will endure.’