Affairs put a spring in your step, boost self-esteem and life satisfaction – but only if you’re a woman, study finds

When George Michael sang about cheating on a partner and never wanting to dance again, he may have been onto something.

That’s because men are more likely to report low self esteem and a decrease in life satisfaction after having an affair – while for women it’s the opposite, according to a study.

Researchers from Tilburg University in the Netherlands collected data on German adults over 12 years and asked them about their wellbeing as well as their relationships.

From a large cohort they focused on 609 people who had been involved in an affair and 338 who had been the victim of one.

Analysis revealed on the whole, women who cheated reported an increase in self-esteem and life satisfaction after the affair.

Meanwhile the opposite appeared to be true for men, who suffered more after committing adultery.

When George Michael sang about cheating on a partner and never wanting to dance again, he may have been onto something. That’s because men are more likely to report low self esteem and a decrease in life satisfaction after having an affair – while for women it’s the opposite, according to a study (stock image)

Beware of anyone flirting with you online – it could ruin your relationship, study claims

Whether it’s in your Instagram DMs or via the work Slack, many people enjoy flirting online and see it as a bit of harmless fun.

But a new study has warned that these seemingly innocent interactions could be disastrous for your relationships.

Researchers from Reichman University have revealed how online flirtations can make your current partner less appealing in the real world.

The study, published in the journal Psychological Science, reads: ‘Our analyses detected one group of participants who seem to recover and even thrive after infidelity…unfaithful women.

‘Potentially, women’s affairs are more likely to be a result of partner dissatisfaction, and consequently, the affair may be a wake-up call for their partners, leading positive behavioural change.

‘A look at outcomes suggest that male perpetrators were more negatively affected by the event.’

Their results also revealed cheating was preceded by a gradual decrease in personal and relationship satisfaction over several years.

This could be triggered by a number of reasons – for example a lack of honest communication or a significant life event such as having a baby.

‘In perpetrators, this decline might be a reason for starting an affair or even an intentional distress management strategy,’ the researchers wrote.

‘In victims, a decrease in wellbeing might be a result of feeling the partner’s dissatisfaction or represent a causal factor increasing their likelihood of being cheated on.

‘Unhappiness has been associated with poor outcomes in social life in previous research. 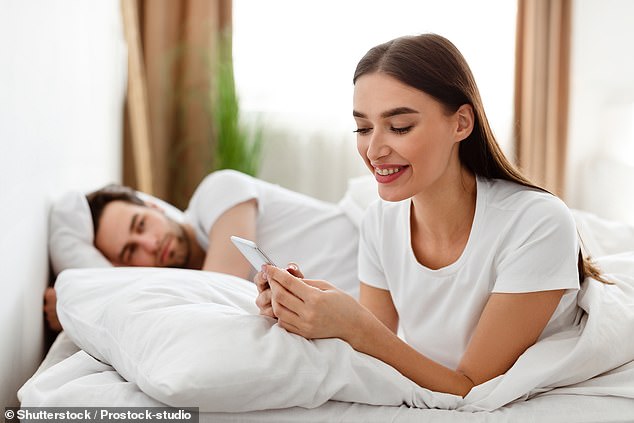 Analysis revealed on the whole, women who cheated reported an increase in self-esteem and life satisfaction after the affair (stock image)

‘Hence, a decrease in personal wellbeing might make the future victim less attractive, contributing to the infidelity of the partner.’

Separate research has indicated that if your friends are having affairs you’re more likely to cheat too.

Researchers from Reichman University in Israel discovered that when adultery becomes the norm, feelings of commitment to a current partner are reduced while desire for an alternative mate increases.

And they warned the phenomenon appeared to affect males more than females.

According to the Office of National Statistics (ONS), infidelity is one of the most commonly cited reasons for divorce in the UK.

A YouGov poll carried out in 2015 revealed that as many as one in five Brits have had an affair.

WHAT TACTICS DO PEOPLE USE TO STOP THEMSELVES CHEATING?

Researchers at the University of New Brunswick asked 362 heterosexual adults how they had staved off temptations to cheat while in a relationship.

Seventy-five per cent of the study’s respondents, who were aged between 19 and 63, selected ‘relationship enhancement’ as their primary tactic.

This ploy included things like taking their partner on a date, making an extra effort with their appearance around them, or having more sex with them.

The second most-popular was ‘proactive avoidance’, which involved maintaining distance from the temptation.

As well as physically avoiding the temptation, people also avoided getting close in conversation with that person.

3. ‘Derogation of the temptation’

The third and final tactic used by people was ‘derogation of the temptation’, which involved feelings of guilt, and thinking about the tempting person in a negative light.

Participants reported flirting less when they applied the final, ‘derogation of the temptation’ strategy.

But none of the strategies had an effect on the levels of romantic infidelity, sexual infidelity, and whether the relationship survived.

Psychologist Dr Alex Fradera, who was not involved in the research, said the findings show little can be done once feelings of temptation have crept in.