By Rebecca English for the Daily Mail

Ever the doting grandfather, Prince Charles gives little Prince Louis a loving cuddle in a picture he released to mark his grandson’s second birthday.

Charles, 71, made the rare posting on social media as he sent his wishes from Scotland.

He is in lockdown at Birkhall, his Scottish home, with wife Camilla because of the coronavirus crisis and so was forced to console himself with a video call to Norfolk, where Louis, his parents William and Kate, brother George, six, and sister Charlotte, four, are based.

Charles made his feelings known in a sweet post: ‘A very happy birthday to Prince Louis, who turns two today. The young prince enjoys a hug from his grandfather, the Prince of Wales.’

Tender: Charles with grandson Louis in a photo released yesterday to celebrate his grandson’s second birthday

It is not clear when or where the picture was taken but the Mail understands that Kate was the photographer. And it offers a charming glimpse of a side to Charles that the public rarely get to see, dressed casually and clutching Louis in his arms.

The prince treasures the shot so much that he keeps it in a frame in his study at Birkhall. Charles has always been keen to play the role of loving father and grandpa, whether cosied up with his sons William and Harry and their children or playing with Camilla’s grandchildren.

Kensington Palace also put up an ‘Instagram v reality’ post, showing an outtake from the set of birthday pictures they released.

The set, taken by Kate at Anmer Hall, showed Louis having fun making a rainbow picture from his handprint. But she took other snaps showing Louis, looking the spitting image of big brother George, with his face covered in paint – and laughing uproariously.

Archie Mountbatten Windsor has made his first – and last – appearance on the official list of recipients of gifts made to the Royal Family in the past year. 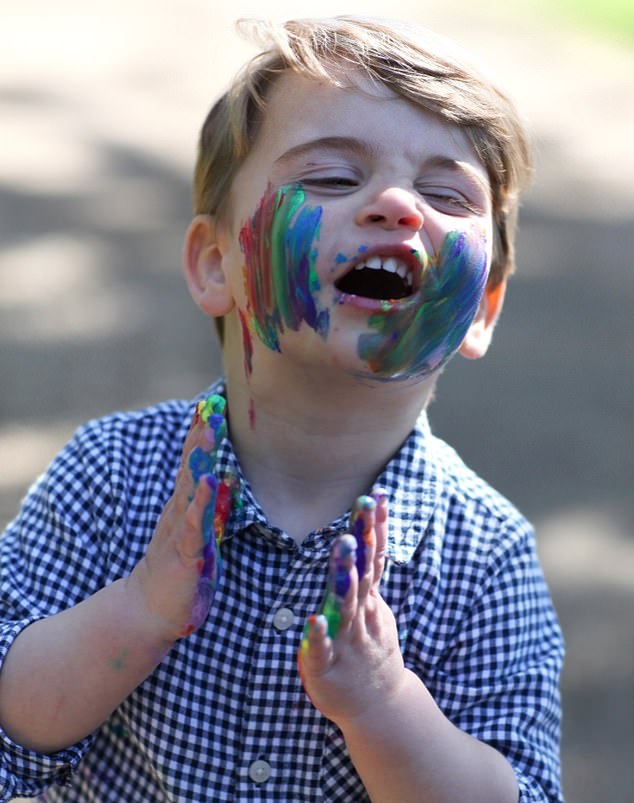 Louis has paint smeared all over his face in this picture taken by Katee. The two-year-old had been painting a rainbow

Among the items Harry and Meghan’s son received on the family’s official tour to South Africa, Botswana and Angola were two books from Archbishop Desmond Tutu, a cuddly elephant, two pilot’s shirts and a string of beaded bracelets.

The then five-month-old – whose parents have now quit as working royals – was also given a knitted jumper, dungarees, a toy monkey and two cuddly rhinoceroses.

Harry and Meghan came home with more than 100 gifts. Items given to the Queen included a painting of a swimming pig, from the governor-general of the Bahamas.

Any gifts that are not perishable will eventually become part of the Royal Collection.