A man has been arrested for allegedly selling fake ‘Xanax’ tablets that landed three teenagers in hospital.

The 18-year-old Adelaide man allegedly supplied the illicit substance to two teenage males and one teenage female who after ingesting the tablets needed urgent medical care.

Police raided an Elizabeth Vale home on Tuesday and seized over 1,400 tablets labelled ‘Xanax’ – with some packaged in small bags ready for supply. 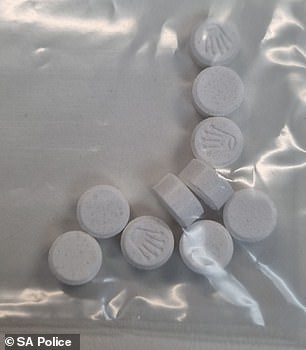 An Adelaide man, 18, has been arrested for allegedly selling fake ‘Xanax’ (pictured, left) to three teenagers after police raided his home and seized over 1,400 tablets – with some already packaged ready to be sold (pictured, right)

The tablets marked as ‘Xanax’ were identified as fake and were laced with a variety of illicit substances.

South Australian police said the drugs posed a significant threat to the health and safety of the community.

‘This poses a significant risk to the community who would be unaware of what they are consuming,’ the police statement read.

‘Police wish to remind the public that taking any medication which hasn’t been prescribed to you by a doctor can be dangerous and even life threatening.’

He was refused bail and will face the Elizabeth Magistrates Court on Wednesday.