A family have been found guilty of animal cruelty after 14 dogs and puppies were seized from a ‘squalid’ home where faeces was littered across the floors and they had no water.

A couple and their adult son were convicted on seven charges at Adelaide’s Magistrate Court on Monday, including six counts of ill-treatment of an animal and one count failing to provide adequate food.

The owners, one of whom is a registered dog breeder, surrendered Chewy to the RSPCA and were ordered to place Pumpkin on a feeding plan.

But less than a month later, the animal welfare agency attended the property again after receiving another complaint and found ‘the entire house to be in a squalid condition’ with no water visibly accessible to the animals.

The court heard there was ‘large amounts of rubbish piled on the floor, faeces scattered over most floors and a strong smell’ and Pumpkin’s eight puppies were living in a ‘filthy’ box under the kitchen table.

All of the animals were seized, and Pumpkin, who was found to be in an emaciated state, was taken to the vet where she was given a 2/9 body condition score.

A second dog was found to be underweight, and three were obese, while the puppies had no health issues.

The three defendants, who were charged in relation to seven dogs, have been placed on 12-month good behaviour bonds and each ordered to pay $1200 to the RSCPA in animal boarding fees. 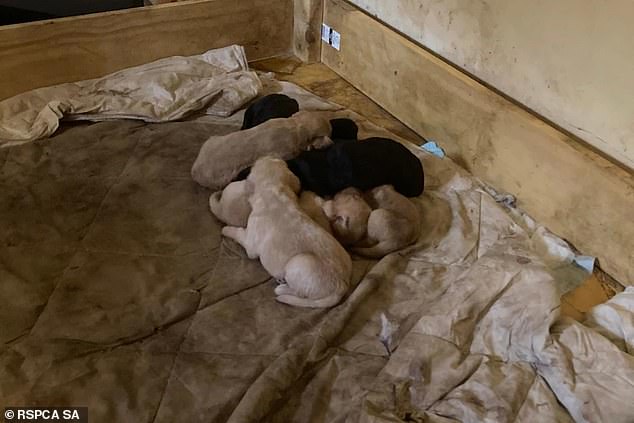 Inspectors returned to the home in February to find Pumpkin had given birth to eight puppies (pictured), which were living in a ‘filthy’ box under the kitchen table

A Chihuahua cross, Ruby, has since been allowed to return home since the house was cleaned, and is the only animal permitted in the trio’s care ‘until further order’.

All other dogs have since been rehomed.

RSPCA SA chief inspector Andrea Lewis said the agency comes across too many backyard breeders who do not have basic animal welfare knowledge.

‘I hope that this family is able to maintain their home in a hygienic state for the benefit of not only their animals’ wellbeing, but also their own,’ Ms Lewis said.

‘This case is also a reminder that a lactating female dog such as Pumpkin has much higher nutritional needs than normal.

‘Failing to meet those needs will result in the kind of shocking weight loss we saw in this dog, and is a clear breach of the laws governing dog breeding in SA. 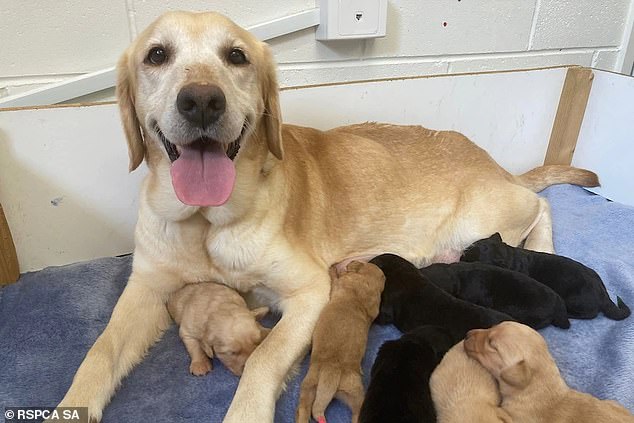 Pumpkin and her eight puppies, along with four other dogs, have been rehomed after they were seized by the RSPCA