Sydney Swans champion Adam Goodes has returned to the SCG for the first time since he cut all ties with the AFL in disgust after he retired in 2015.

The code’s most decorated Indigenous player came back to participate in the 10-year reunion of the club’s 2012 flag-winning team, doing a lap of the ground at halftime in the Swans’ clash with the Gold Coast on Saturday afternoon.

It was originally reported that Goodes would miss the SCG celebration due to a family commitment and only attend two team dinners, but he was front and centre come game day – much to the delight of Bloods fans. 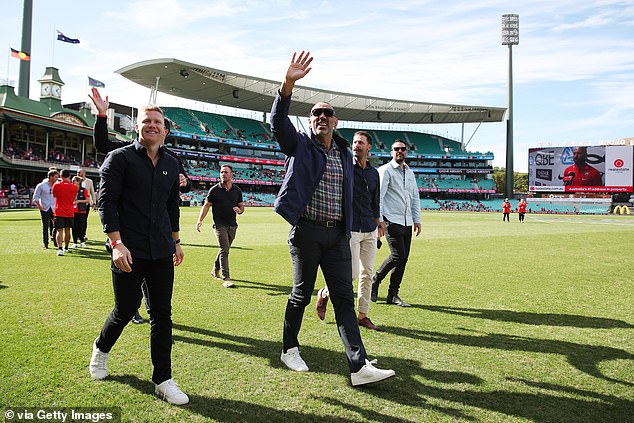 The two-time Brownlow winner refused to have anything to do with the game after his retirement, which came after he was subjected to racist taunts and prolonged booing from the crowd during games during his last three seasons – especially his final year.

Goodes was called an ‘ape’ by a young Collingwood fan in an infamous 2013 incident. Days later then-Magpies boss Eddie McGuire suggested promoters of a King Kong musical in Melbourne ask the footy star to promote the show.

In 2015 he celebrated a goal against Carlton with an Indigenous-themed war cry that saw supporters target him heavily. 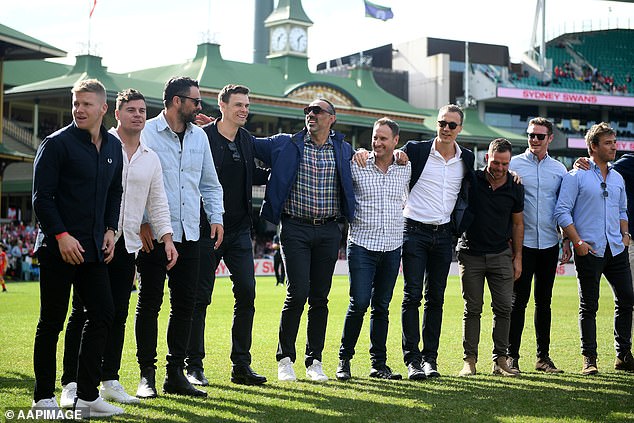 The Swans champion returned for the 10-year reunion of Sydney’s 2012 team, which won the flag in a thrilling contest with Hawthorn 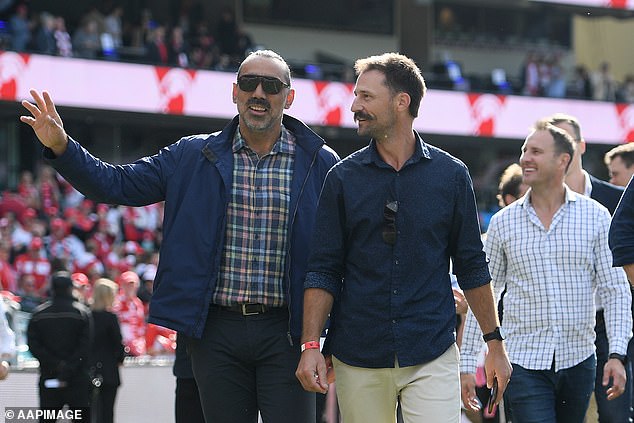 Goodes suffered racist comments from fans and was heavily booed in his last three seasons in the league. He turned down a motorcade at the 2015 grand final and even refused to be inducted into the Australian Football Hall of Fame

That year he refused to participate in a grand final motorcade for retired players, and has declined invitations to AFL events ever since – even declining an invitation to be inducted into the Australian Football Hall of Fame last year.

But Goodes looked a happy man as he greeted fans with his former teammates during the lap of the ground, and when he stood in an honour guard as the current Swans players ran onto the ground for the start of the match.

Sydney fans were happy to see the legend finally return to the fold after such a long absence.

‘A smiling Adam Goodes on the SCG, you love to see it,’ wrote Oliver Caffrey.

‘Not me getting really emotional seeing Adam Goodes on the SCG again,’ added Rebecca Turner.

Not me getting really emotional seeing Adam Goodes on the SCG again. #AFLSwansSuns

Goodes was joined by fellow 2012 flag winners including Jude Bolton, Shane Mumford, Kieren Jack and Lewis Jetta for the reunion.

That Swans team beat Hawthorn 14.7 (91) to 11.15 (81) with Goodes kicking a goal in a tight game that the Bloods played themselves back into after falling more than three goals behind in the first quarter.