British actress Jane Birkin is in recovery after suffering a minor stroke.

Her family said in a statement to AFP that she ‘suffered a minor form of stroke a few days ago,’ but is now ‘doing well’ however has pulled out of a scheduled appearance at the American Film Festival in Deauville, France as she recovers.

The Sixties icon, 74, who is the ex of Serge Gainsbourg, was set to chat about her daughter Charlotte Gainsbourg’s documentary, titled Jane By Charlotte, of which she is the subject however she has withdrawn following her medical plight.

The actress’ last appearance was at the Angouleme Festival du Film Francophone in  d’Angouleme, France on 27 August, where she seemed in great spirits.

British actress Jane Birkin has pulled out of a scheduled appearance at the American Film Festival in Deauville, France after suffering a minor stroke [pictured last week]

Jane’s health his headlines back in 2002, when she was diagnosed with Leukemia.

Following many torrid, youthful years of excess, Jane detailed her relationship with alcohol – and how her Leukemia changed that – in a chat with Interview Magazine.

Last year, she said: ‘I had to [give up alcohol]. When Jacques Doillon and I separated, I went off to Sarajevo and I met [the French writer] Olivier Rolin, and then after that I got quite serious with singing…

‘I made myself have a sort of Jewish-Christian morality thing, thinking if I had any pleasure at all, then the show wouldn’t work. I didn’t drink or smoke a cigarette for about a week before I did the show, then it would be a month before the show…. 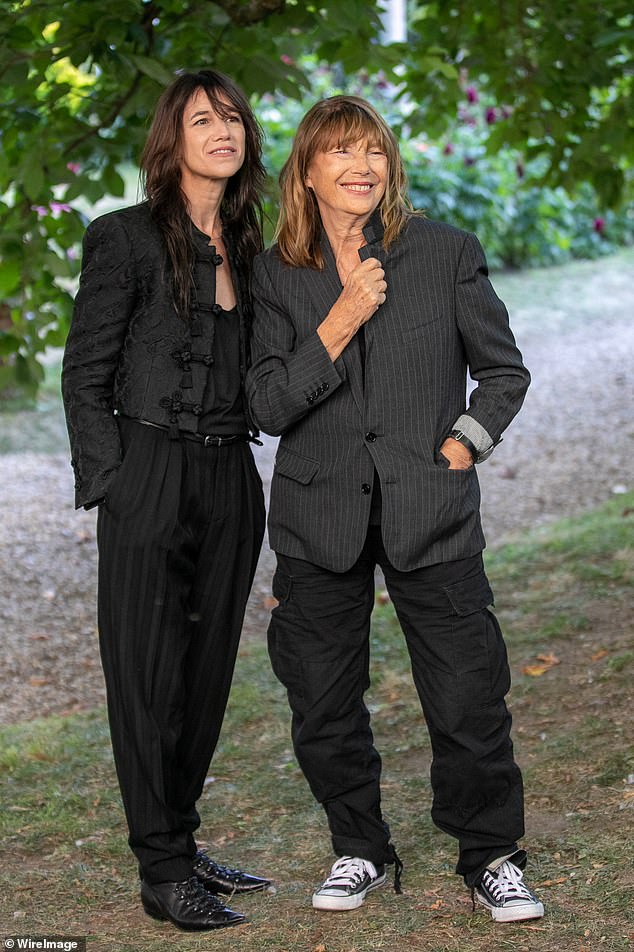 Mother and daughter: 76-year-old singer Jane – who is the ex of Serge Gainsbourg – was set to chat about her daughter Charlotte Gainsbourg’s documentary, titled Jane, which is about her [Jane and Charlotte pictured last week]

‘I had no noble reasons at all; it was only out of fear of the above. When I got leukemia, then of course everything stopped. It hasn’t been hard at all because the very idea of being sick, the very idea of it going to your head, makes me panic…

‘I simply hate [drinking]. I mean, I’m frightened by it. So, to even imagine my youth, I don’t know. It was another time.’

Jane is one of the UK’s best-known Sixities sensations, known for her romantic affairs, striking looks and fashion sense. She is perhaps best known for the French duet Je T’aime… Moi Non Plus, which she sung with her ex Serge in 1968.

The couple met on the set of the movie Slogan and began dating. They welcomed Charlotte, now 50, in 1971. Jane and Serge split after 12 years together.

Je T’aime… Moi Non Plus was deemed sexually explicit and inappropriate on its release. It was banned in many countries and slammed by the Vatican for the intense breathing and groaning that features in it.

This year she released the song Oh! Pardon tu dormais…? 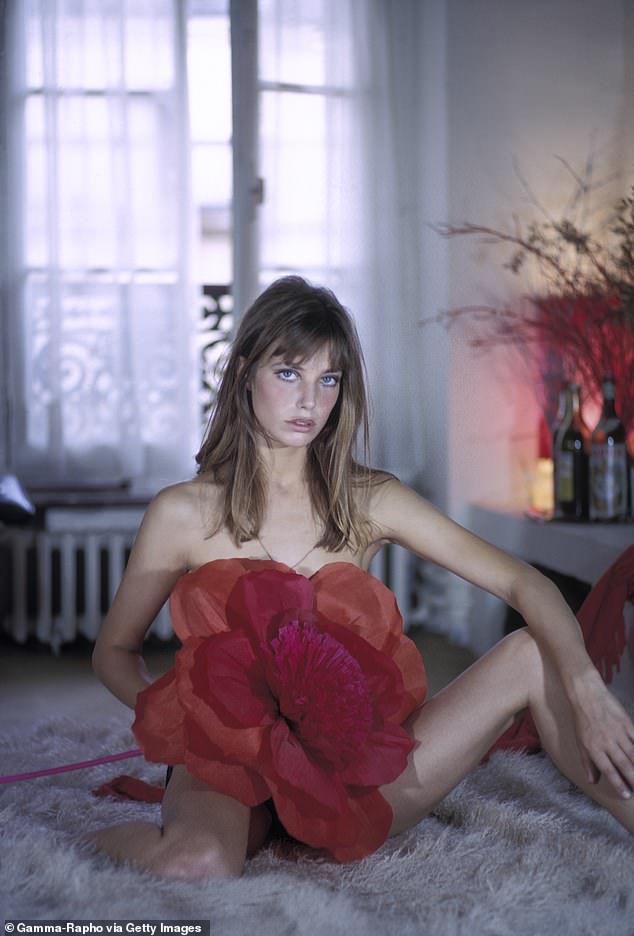 Wow! Jane is one of the UK’s best-known Sixities sensations, known for her romantic affairs, striking looks and fashion sense (pictured in 1968)

In 2017 she and her ex Serge – whom she remained friendly with after their split – released Le Symphonique. This was a series of songs Serge had written for her during and after their relationship.

She has also named Birkin bag on behalf of designer brand Hermes.

Last year, Jane revealed she was so insecure about her looks during her first marriage she slept with an eyeliner under her pillow so she could apply it if her husband woke and he wouldn’t think she had ‘tiny, piggy eyes’.

The model, who married composer John Barry while still a teenager, reveals she never believed she was attractive and hid behind ‘a mask of make up’ for years.

The icon who became a singer and actress, says it wasn’t until her second marriage to Serge that anyone told her she was beautiful. 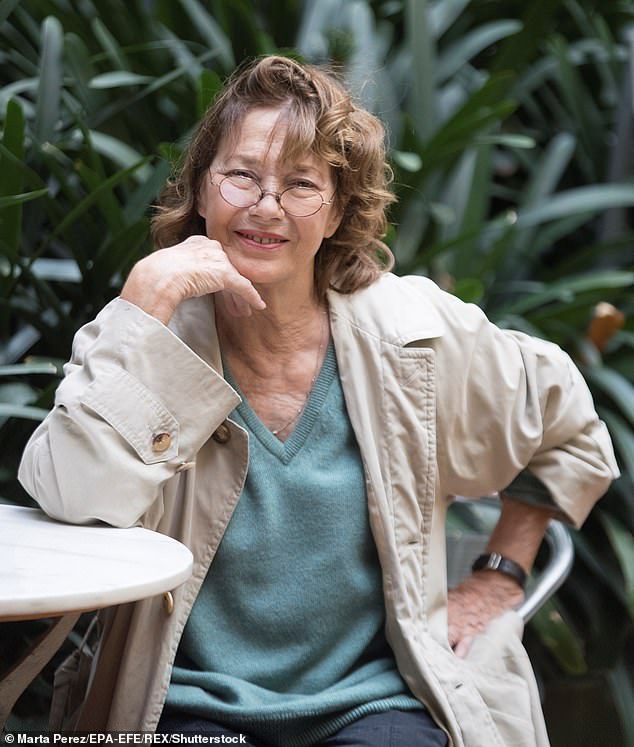 Risque: She is perhaps best known for the French duet Je T’aime… Moi Non Plus, which she sung with Serge in 1968 [pictured in 2019]

Jane admitted she didn’t ‘look like myself’ until he stripped her of make-up while directing her in the film for his song ‘Je t’aime moi non plus’ when she was 28.

Writing in Elle magazine, Birkin says as a teenager she always felt ‘dowdy’ next to her glamorous mother and older sister until she started buying make-up from Woolworths on London’s King’s Road.

She said: ‘I’d pile on the amount of mascara and eyeshadow – I knew my father was going to scream at me and tell me I looked like Cleopatra or a tart.

‘By the time I got married to composer John Barry at age 18 I was just a painted face, hiding behind a mask of make-up. I suppose I fitted into the 1960s ‘English pretty’ look at the time.

‘I wasn’t as beautiful as Jean Shrimpton, who was my icon, but the fashion of the time helped, with very short miniskirts and blonde haircuts with a fringe. 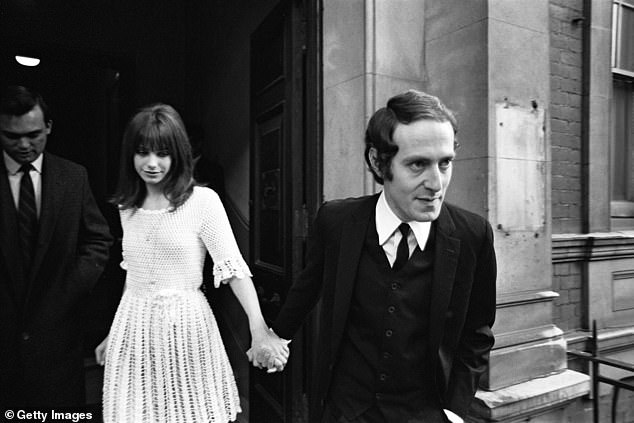 Heartache: Last year, Jane revealed she was so insecure about her looks during her first marriage she slept with an eyeliner under her pillow so she could apply it if her husband woke and he wouldn’t think she had ‘tiny, piggy eyes’ (pictured aged 18 at her wedding to John Barry)

‘Throughout my marriage to John, I used to sleep with an eye pencil under my pillow. If he woke up in the night, I could put it on, so he wouldn’t think I had tiny, piggy eyes. There was such insecurity, it was quite crazy – I spent most of my time trying to look like a fashion tableau…

‘It was only when I left John and want to France, where I met Serge Gainsbourg at an audition for the film Slogan, that I finally felt secure in my looks and realised that I had my own kind of attractiveness.

‘Very soon after we met, Serge told me I was his idea of beauty, which felt so amazing after my marriage to John, during which I’d often felt unwanted and undesired. 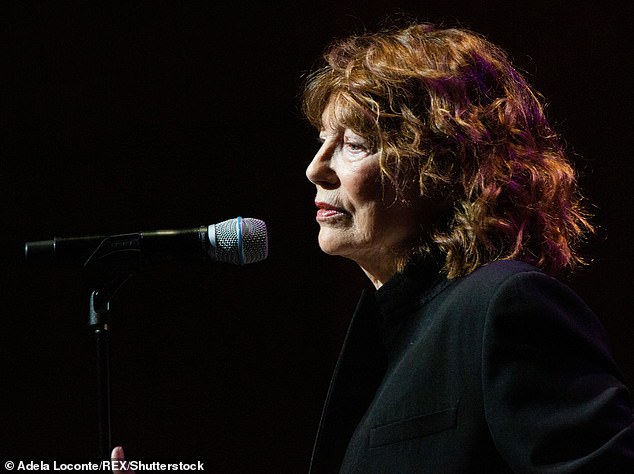 Candid: The actress, pictured in March last year, gave the candid insight in a self-penned piece

‘No one had ever said that it was actually more attractive to have no chest at all. People might have said that it didn’t matter that much, or it wasn’t important at all, or we’d get by without it.

‘But no one had said they’d always imagined they’d be with a girl who looked half like a boy – someone with no chest and big hips, like I had.

‘I remember early on, Serge took me to the Louvre to look at paintings by medieval artists to show me what he meant. He said he’d always been drawn to girls like me when he’d been at art school.’ 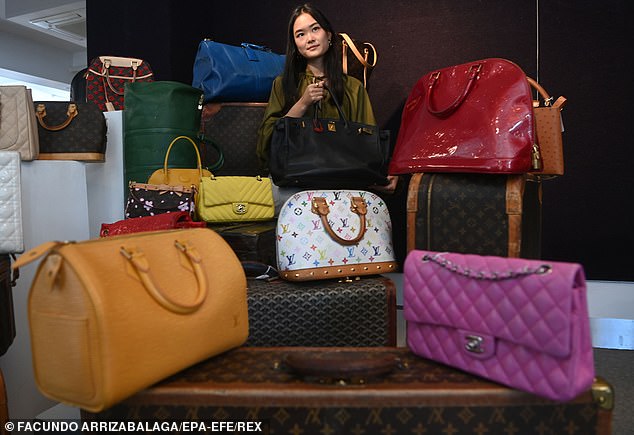