Abortion travel times have tripled and sales of overseas termination pills have surged since Roe v. Wade was overturned.

The human impact of the landmark decision in June has been laid bare in more than a dozen analyses and reports published Tuesday.

They were released just a week ahead of the midterm elections, where some expect abortion rights to be a key issue.

One of the newly published studies estimated it now takes about 100 minutes to travel to an abortion clinic on average, compared to just 30 minutes last year.

A second report showed overseas orders of abortion pills have soared, especially in states including Louisiana and Arkansas where the operation has been banned.

A third study suggested depression and domestic violence could rise as a result of unintended pregnancies.

Since Roe v. Wade was overturned, 13 states have banned abortions while five others have placed restrictions on the procedure.

This map shows estimated travel times to abortion clinics across the US last year, before restrictions on abortion were introduced 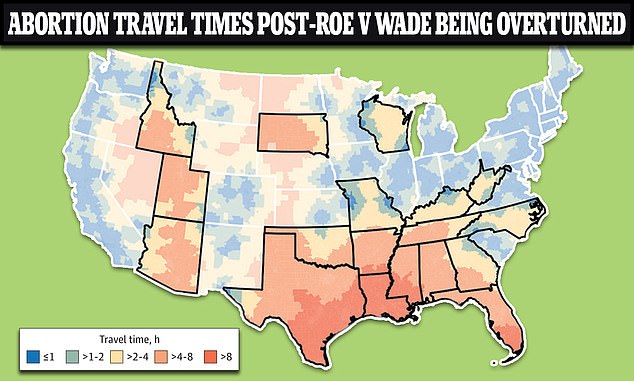 The above shows the estimated travel time to abortion clinics now Roe v. Wade has been overturned across America, with it rising to about 100 minutes on average. The 18 states highlighted have imposed restrictions on abortion or banned it outright

There were 79,620 abortions in August figures show, down six per cent in April.

Abortions fell to almost zero in states where it was banned or restricted over this period, but rose by nearly 5,000 in those where the procedure was still permitted.

Many mothers have come forward with horror stories of being denied medical care due to the stringent rules.

A hospital in Missouri is under investigation after it denied an abortion to a woman whose water’s broke early.

The Freeman Hospital West in Joplin, south-west Missouri, is accused of sending the woman away in late October.

She was forced to travel to another state in late October.

Full details of the case which is being investigated by Federal authorities are yet to be released.

A total of 13 US states have placed outright bans on abortion.

But in July the Biden Administration reminded hospitals that they were still required to give them in life- or health-saving emergencies under federal law.

The investitigation is being carried out under the Emergency Medical Treatment and Labor Act, or EMTALA, which supercedes state law.

Situations where it comes into force include a woman’s waters breaking early, which can lead to serious infections and threaten the life of the mother.

Just yesterday the federal Government launched its first investigation over a woman being denied a medical abortion.

The Freeman Hospital West in Joplin, Missouri, has come under fire after a hospital refused to terminate a pregnancy in a woman whose waters broke early.

She eventually sought medical help outside the state.

The Biden Administration has reminded providers in states where abortion is banned that federal law requires them to provide it in life- or health-based emergencies.

The procedure is restricted in Arizona, Florida and Georgia.

In one of the latest study, published in JAMA Network Open, researchers modelled the average time taken to travel to an abortion clinic across the contiguous US.

Analysis of travel times was carried out when 749 clinics were open last year, and compared to 671 still operating after June this year.

In 2021, researchers estimated it took about 30 minutes to travel to each clinic on average.

But by September this year models suggested the time had risen to about one hour and 30 minutes on average — or tripled — as bans came into force.

They also estimated the proportion of women living more than an hour from a clinic doubled from 14 to more than 33 per cent.

In a second study, scientists looked over anonymized data from Aid Access, a physician-run telehealth service based in Europe which prescribes abortion pills via the mail.

The company said it saw a surge in requests for self-managed abortions.

The service received around 214 daily requests from June to August, compared to 83 from September 2021 to May 2022.

Mississippi saw prescriptions surge 254 per cent — the biggest uplift of the states studied — followed by Arkansas, Alabama and Oklahoma.

Louisiana was the state with the most prescriptions of termination pills, at a rate of 14.9 pills per 100,000 women — up 166 per cent since Roe v. Wade was overturned. 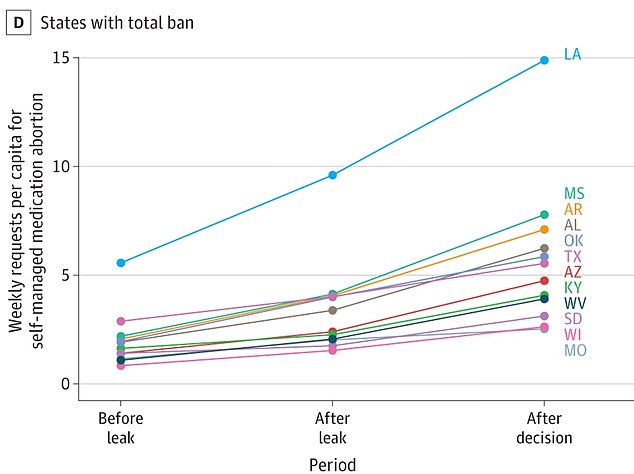 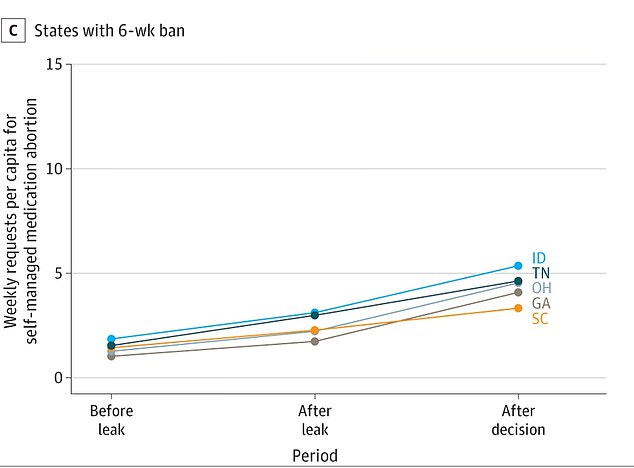 Researchers at the University of Texas, Austin, who led the study, found most women were requesting the pills because of the current state restrictions.

In some cases, they were being ordered by women who were not pregnant to be stored for emergencies.

‘The largest increases occurred in states that implemented total bans, with requestors frequently citing these bans as their motivation for accessing the service.’ 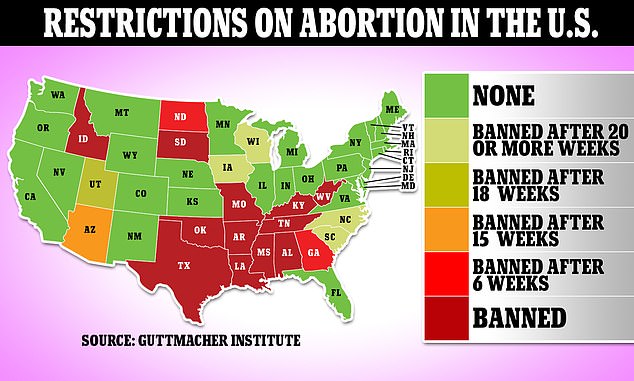 A third meta-analysis looked at 524,000 women who had intended and unintended pregnancies.

Researchers from the Kaiser Permanente Health System said in the study that unintended pregnancy was ‘significantly associated with adverse maternal and infant outcomes’.

Another study warned of the health risks for women aged 10 to 13 years old who fall pregnant and don’t have access to abortions.

Scientists sifted through the Premier Healthcare Database — which covers 25 per cent of births in America — from January 2019 to May 2021.

The youngest age group had the highest risk of pre-term delivery, C-section and pre-eclampsia among the group.

They were also most likely to suffer a stillbirth, or need to be admitted to the intensive care unit (ICU).