‘We need to be united in this battle against a societal issue bigger than football itself’: AC Milan keeper Mike Maignan issues defiant response after racial abuse by Juventus fans, insisting he is ‘black and proud’

AC Milan goalkeeper Mike Maignan was in a defiant mood after being subjected to racist chants during his side’s 1-1 draw against Juventus on Sunday, insisting much more needs to be done to combat discrimination in football.

Ante Rebic’s header rescued a point against the Turin outfit in what should have been a memorable game for the Rossoneri, but for Milan’s Maignan, it was tainted by vile abuse from the stands, something the Frenchman said would not go away just from condemnation alone.

He called for ‘comprehensive action’ to be taken and said footballing authorities must take a ‘united’ front to combat racism in the game. 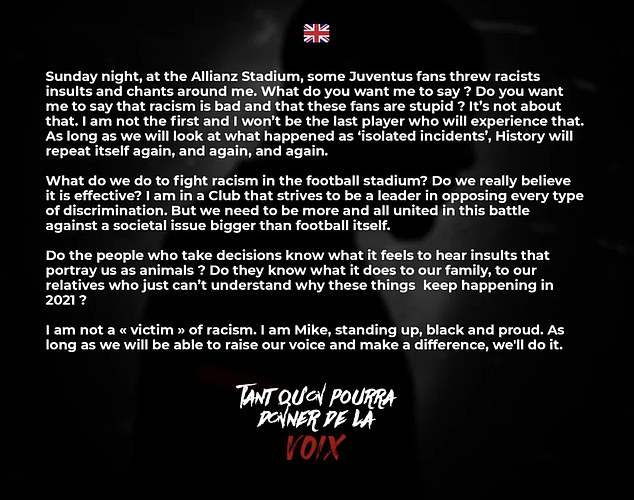 ‘On Sunday evening at Allianz Stadium, Juventus supporters targeted me with racial slurs and cries,’ Maignan said. ‘What do you want me to say? That racism is wrong and that these supporters are stupid? It’s not about that.

‘I am neither the first nor the last player to have this happen. As long as these events are treated as ‘isolated incidents’ and no comprehensive action is taken, history is bound to repeat itself over and over and over again.

‘What are we doing to combat racism in football stadiums? Do you really believe it’s effective? I am in a club that strives to lead the way by opposing all forms of discrimination. But we need to be more numerous and to be united in this battle for society which goes beyond football.’ 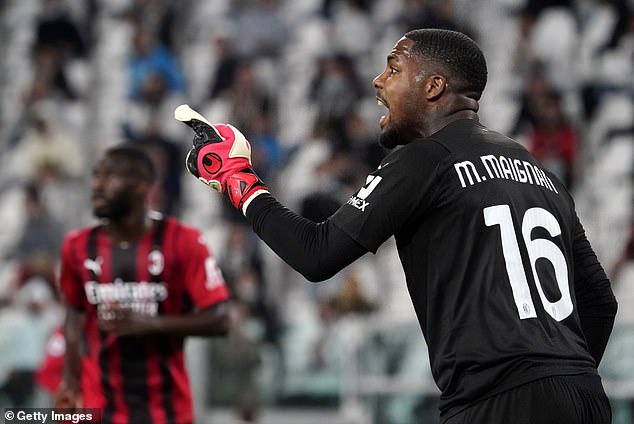 He said officials needed to place themselves in the shoes of players who are reguarly abused by fans, and insists he does not see himself as a ‘victim’ because he is proud of who he is – vowing to ‘raise his voice’ to end racism.

‘In the proceedings, do the people who decide know what it feels like to hear insults and cries relegating us to the rank of animals? Do they know what it does for our families, for our loved ones who see it and who do not understand that it could still happen in 2021?

‘I am not a “victim” of racism. I am Mike, standing, black and proud. As long as we can give our voice to change things, we will.’ 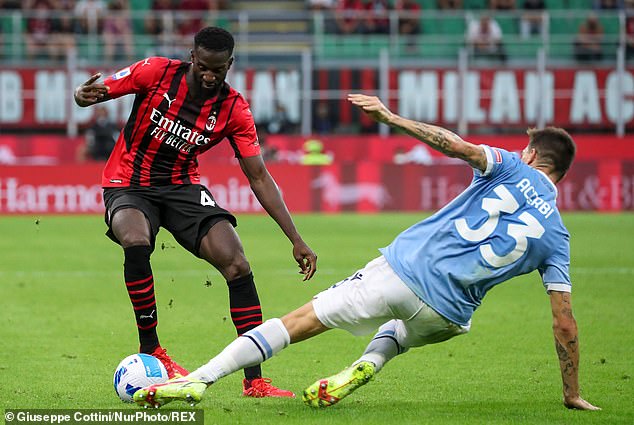 Alvaro Morata’s stunning solo effort had put Max Allegri’s men ahead in Turin before the home side were confirmed to have suffered their worst start to a season in 60 years when Rebic clinched the equaliser.

The abuse of Maignan is not the first time a footballer has endured racist taunts from the stands in Serie A this season.

His team-mate Tiemoue Bakayoko complained of abuse from Lazio fans during their 2-0 win this month, and the midfield also claimed Franck Kessie was targeted.

Meanwhile, Hungary’s FA was handed a stadium ban and a £160k fine after Raheem Sterling and Jude Bellingham were both targeted by fans during England’s 4-0 win in the international break.