An elderly abandoned dog has been found tied to a gate with a note asking a kennel to take him in because he had not ‘learnt to be good’.

The black Labrador was left attached by his collar to the mental gate outside Jasmil Kennels in Upchurch near Sittingbourne, Kent.

He was discovered with a note which said: ‘Hello, pls (sic) can you take me in as my owner has abandoned me after 10 years because I have not learnt to be good, so I have been returned here where he found me.

‘Thank you for looking after me, sorry for inconvinance (sic).’

The black Labrador was left attached by a collar to a fence outside Jasmil Kennels in Upchurch near Sittingbourne, Kent 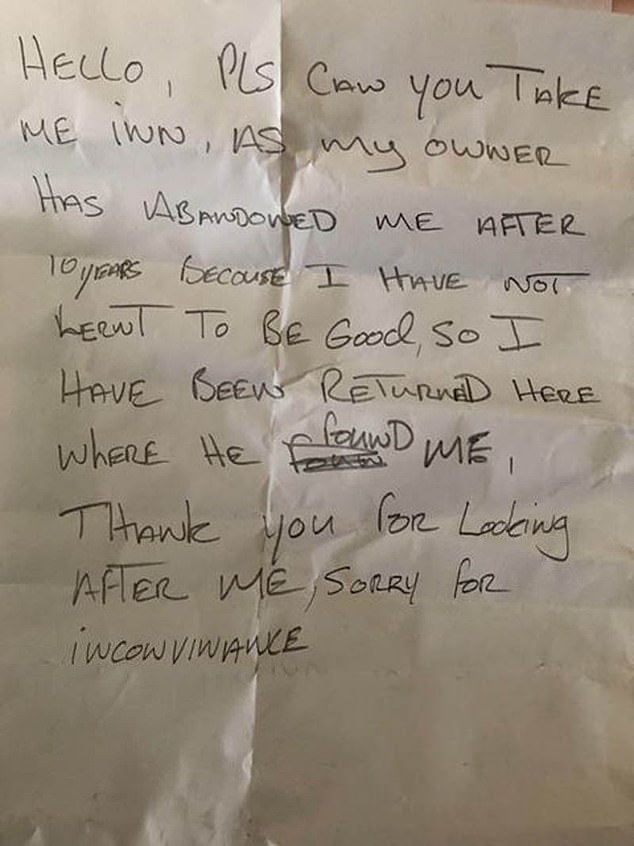 The elderly dog did not have a microchip and now Swale Borough Council’s stray dog service is appealing for information.

In a post on social media, the service said: ‘This elderly black Labrador was found tied up to railings at Jasmil Kennels this morning.

‘We would very much like to speak to the owner to establish why the dog has been abandoned.

‘If you recognise him and can be of any assistance, please contact the council in confidence.

‘He will now be taken into our care.’

A Swale council spokesman added: ‘If an owner is struggling with their dog, this is not the way to deal with it.

‘Re-homing is the last option, but this isn’t the way to do it, so we would appreciate any information we can get so we can speak to the owner.’