By Jessica Summers For Mailonline

The British woman took to parenting forum Babycentre to explain how her husband, who she has been with for ten years, will take off her clothes, fondle her, and penetrate her while they are both asleep.

‘Its mostly just a mild annoyance to me, he doesn’t do it every night but can go through periods of it being better and worse’ she wrote. ‘Mostly I wake up and it’s touching over clothes, him interesting himself and thrusting, hands in my underwear. But I nearly always wake up quickly and usually push him hard which wakes him up and then obviously it stops. ‘

Sexsomnia is a recognised sleeping disorder or form of parasomnia that causes an individual to involuntarily engage in sexual acts.

While some commenters said that he can’t be blamed, others were very concerned that he’s never sought help for the condition and cast doubt on his claims that he has a sleep disorder. 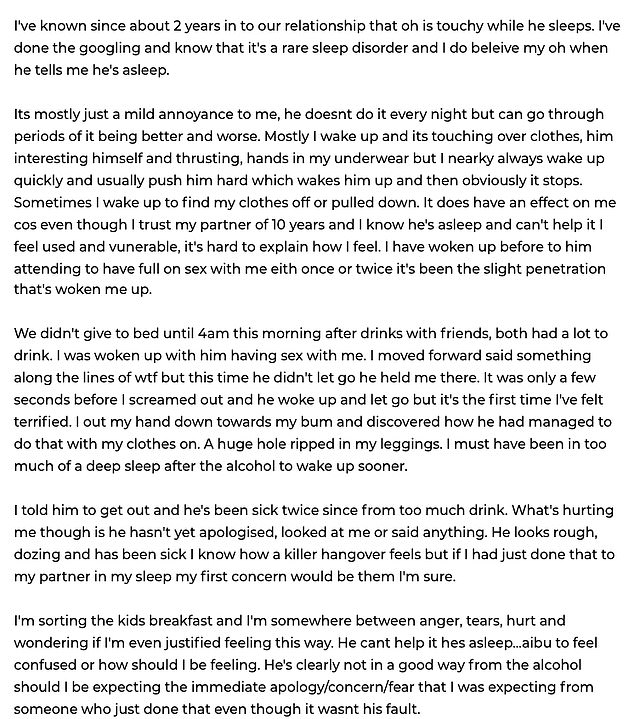 The shaken woman asked for advice on what to do, saying that she was ‘between anger, tears and hurt’

Explaining her husband’s nocturnal habits, the woman wrote: ‘Sometimes I wake up to find my clothes off or pulled down.

‘It does have an effect on me because even though I trust my partner of ten years and I know he’s asleep and can’t help it I feel used and vunerable, it’s hard to explain how I feel.’

‘I have woken up before to him attempting to have full-on sex with me with once or twice. It’s been the slight penetration that’s woken me up.’

‘We didn’t give to bed until 4am this morning after drinks with friends, both had a lot to drink. I was woken up with him having sex with me.’

‘Sexsomnia’, or Sleep Sex is a sleeping disorder or form of parasomnia that causes an individual to involuntarily engage in sexual acts.

The disorder was first discovered in the 1990s, but brought to public attention in the 2003 issue of The Canadian Journal of Psychiatry.

It was initially classified as a parasomnia, which refers to unwanted behavior while an individual sleeps.

This category also includes:  sleepwalking, talking, teeth-grinding, even getting up and other actions.

Although research on sexsomnia is patchy, the condition is understood to be very rare.

Healthline reports that common symptoms include:

She added: ‘It was only a few seconds before I screamed out and he woke up and let go but it’s the first time I’ve felt terrified.’

Fellow Babycentre users urged her to leave the room and night and make him seek help immediately, saying she needed to protect herself from him.

One posted: Does he remember it?? My husband used to get bouts of sexsomnia, but he never remembered it! It made me feel awful once we worked out what was going on, because I’d go along with it, so then it felt almost rapey?’

Another remarked on the fact that she is being sexually abused whether he is asleep or not, saying: ‘You do not have to accept sexual abuse just because it’s caused by a medical condition, not least an *undiagnosed* one.’

‘Don’t share a bed with him again until this condition is diagnosed and treated. If it is a medical thing then it’s not his fault but it IS his responsibility to do something about it and not yours to just tolerate it.’

Later, while responding to a comment asking whether he remembers his nightly assaults, the woman answered: ‘No he doesn’t remember it. I dont go along with it because I don’t want to have sex. It usually happens more if he’s tried it on and I’ve turned it down. Like its playing on his mind when he falls asleep.’

To which someone replied that they thought it would be unfair to pin the blame on him, saying: ‘I think its probably a bit unreasonable to expect an apology for something he doesn’t remember and doesn’t have control over then.’

‘Absolutely talk about it, and try and identify a trigger though!’

However, another person disagreed and wondered why he wasn’t more concerned about his sleeping habits: ‘I’ve been thinking about this and initially thought well if he’s unconscious then it can’t be his fault, but he’s known this has been an issue for years and (presumably) hasn’t done anything to prevent it, and therefore is culpable.’