With a combined age of 268 years, four of us booked a week’s self-drive adventure in Oman. This was on the advice of my gung-ho nephew and wife (half our age) who had driven themselves around the precipitous mountains and deserts and claimed it a doddle. We weren’t convinced.

An overnight flight from the UK meant we were in our hire car — a spotless white Toyota 4×4 — by 8am, somewhat blurry eyed. Our destination: the Hajar Mountains. The excellent roads were empty, and mercifully signs were in both Arabic and English.

With a population of around five million, Oman — which is slightly bigger than the UK — has a long association with Britain, and remains a steadfast destination in the Arabian Gulf. The luxurious hotels work harmoniously with Oman’s strong sense of history and culture.

Wild terrain: Clare Mann went on a self-drive adventure in Oman and said the roads were ‘excellent’. Pictured is a coastal road in the Khasab region

En route we stopped at the 17th-century Jabrin Fort close to Nizwa, the ancient capital of Oman. Cocooned in our cool car, we stepped out into a temperature of 35c. As the only visitors, we were warmly welcomed into its labyrinth, including a jail for women (standard in Omani castles) and an upstairs stall for the Imam’s most prized horse — one of thousands kept.

We caught the tail end of a raucous cattle and goat market in Nizwa, but livelier still was the gun souk where youngsters in Aviator shades fire ancient guns into the air for the sheer fun of it.

We were transfixed by the singing soldiers in Nizwa castle — and were a little frightened to see one of the swords they were whirling fly into the crowd. ‘Was that intended?’ asked a French tourist, unruffled, as it landed at his feet, blade in the ground. 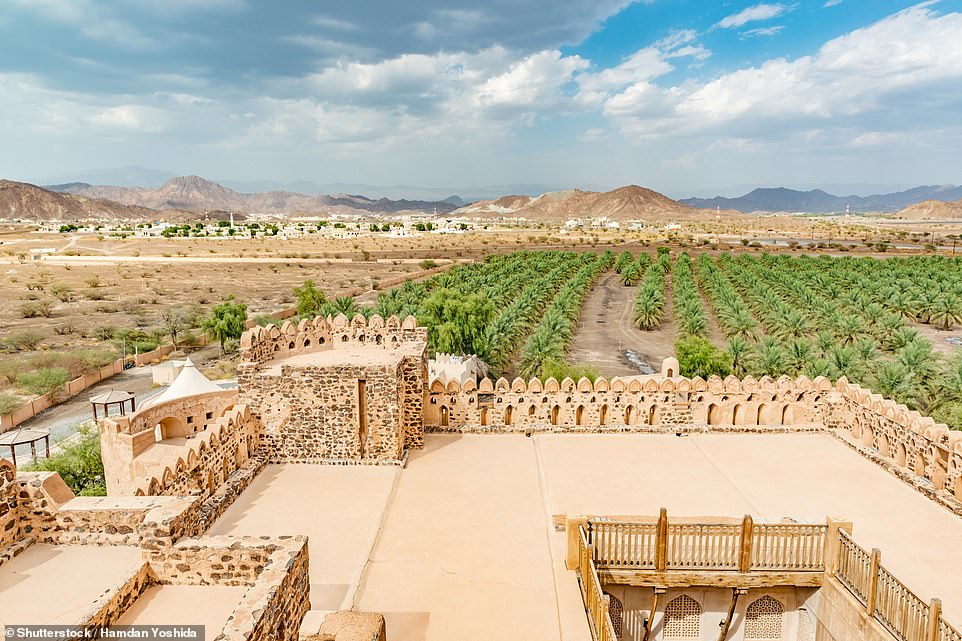 Pictured is the 17th-century Jabrin Fort near Nizwa, which Clare stopped at en route to the Hajar Mountains

Switchback roads took us through a stupendous rocky landscape with occasional slashes of vivid green — terraces carved out of the rock face. Ingeniously irrigated, olives, pomegranates and damask roses flourish.

Alila Jabal Akhdar was our destination for the next four days. On arrival we ate a sumptuous lunch on the hotel terrace perched, at 6,561ft, on a precipice above a canyon. Layers of jagged mountains disappeared into the haze around us.

Away from the comforts of this impressively plastic-free hotel, there is much to do.

Despite various ailments, from new hips to dodgy knees, we chose a different trek each day, hiking along the winding narrow terraces or clambering over smooth boulders in a dried-out wadi (riverbed), accompanied by butterflies and goats. 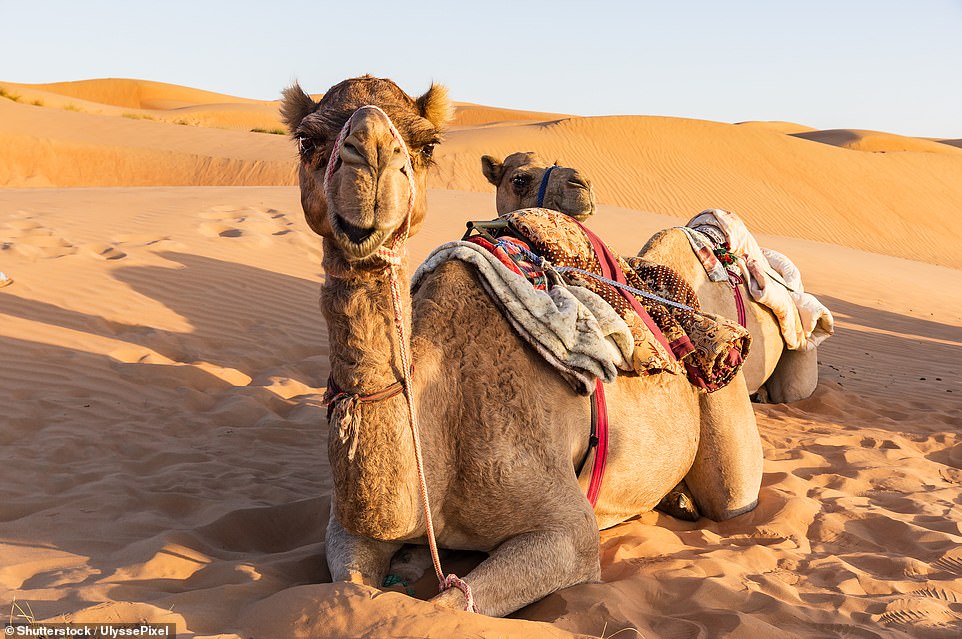 Clare stayed at Desert Nights Camp in Wahiba Sands where guests are invited to sit on camels. Pictured is a camel resting in the heat of the desert (stock image) 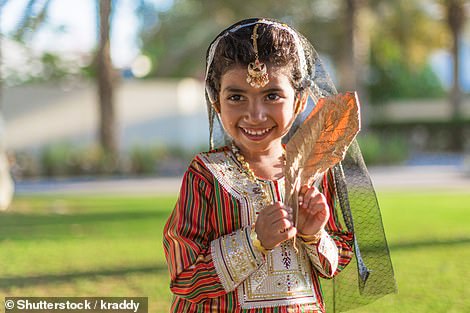 Friendly greeting: Clare was impressed with the Omani hospitality. Pictured is an Omani girl in traditional dress

We swam in a clear opal pool while frogs and tiny fish skittered away. A Dutch family struggled by. ‘What was wrong with the hotel pool?’ grumbled their teenager in flip-flops.

We enjoyed the hotel astronomy evenings, although they were a tad competitive, with everyone wanting to look simultaneously through the telescope in case they missed the comet.

The geology walks were fascinating, and we marvelled at the 500 million-year-old fossils that smothered the black limestone rocks. ‘If you can fit them in your suitcase you can take anything home,’ said Mohamed, the resident geologist. On movie night (the screen on the edge of the abyss), wrapped in a blanket with a glass of red wine, we watched Marilyn Monroe’s Some Like It Hot against a dazzling night sky.

An elegant and elderly Omani couple asked for a rerun with another glass of champagne.

For the real Bedouin experience you must travel far south to the Empty Quarter, but as time was limited we visited Wahiba Sands, a three-hour drive away.

Here, Desert Nights Camp is an oasis of cabins with a central restaurant. We arrived just as a coach-load of Germans were leaving with their wheelie suitcases, and were invited to sit on camels or watch the sunset from a dune alongside other guests with glasses of warm rosé. Neither appealed, so we visited some captive but skittish Arabian oryx nearby. 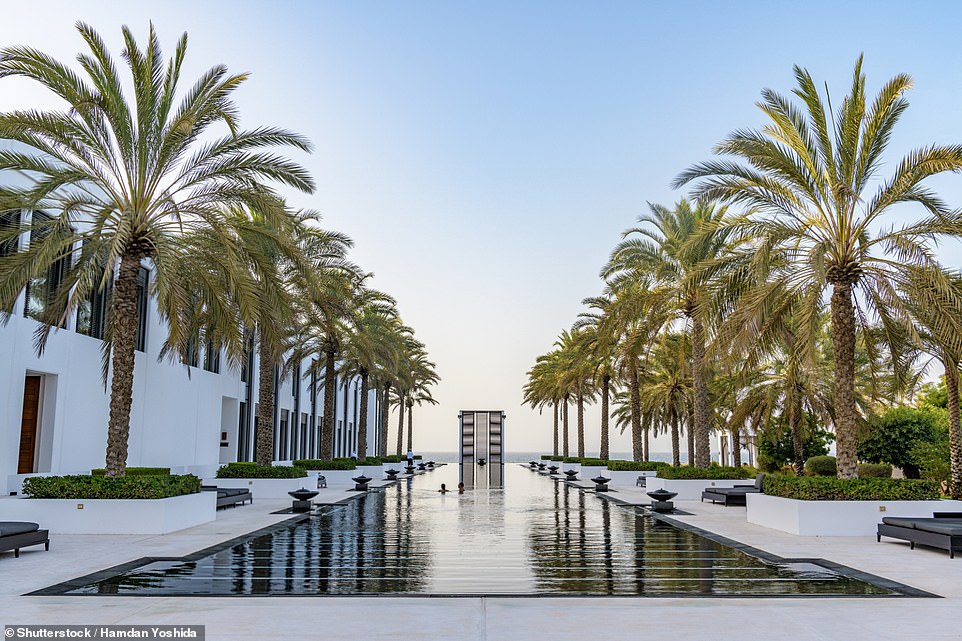 Heavenly: Clare treated herself to two nights at ‘swish’ five-star hotel The Chedi in Muscat (pictured)

Potential disaster struck as we headed back to Muscat: a blowout. But it turned out to be a highlight of our trip — an introduction to Omani hospitality.

Two vehicles stopped instantly. Not a drop of dirt touched our kind benefactor’s spotless white dishdash as he changed our shredded tyre. He then took us to a tyre shop and negotiated a deal for a second-hand tyre at £20.

After our 346-mile circuit we treated ourselves to two nights at swish five-star hotel The Chedi in Muscat. Swimming in the Arabian Sea and watching tankers progress down the Strait of Hormuz with a whisky sour, we mused that, yes, our road trip had been a doddle.