I tried to maintain an air of nonchalance – as if I spend most weekends in extremely expensive hotels – but within seconds, as my butler at London’s Hotel Café Royal on Regent Street guided me through my ‘Regent’ suite I was as giddy as a schoolboy and emitting decidedly un-nonchalant gasps and sighs.

Besuited Omar took me through the large central lobby and into the oversized bedroom and there I beheld surely one of the most coveted city hotel views in the world – across Piccadilly Circus and down Regent Street St James’s to Pall Mall, with the clock face of Big Ben visible beyond, along with the Palace of Westminster.

And the window to the side afforded me views of Regent Street.

Ted checked into one of Hotel Cafe Royal’s Regent Suites (pictured), and was highly impressed. It afforded him views across Piccadilly Circus and down Regent Street St James’s to Pall Mall, with the clock face of Big Ben (just visible in this picture) beyond 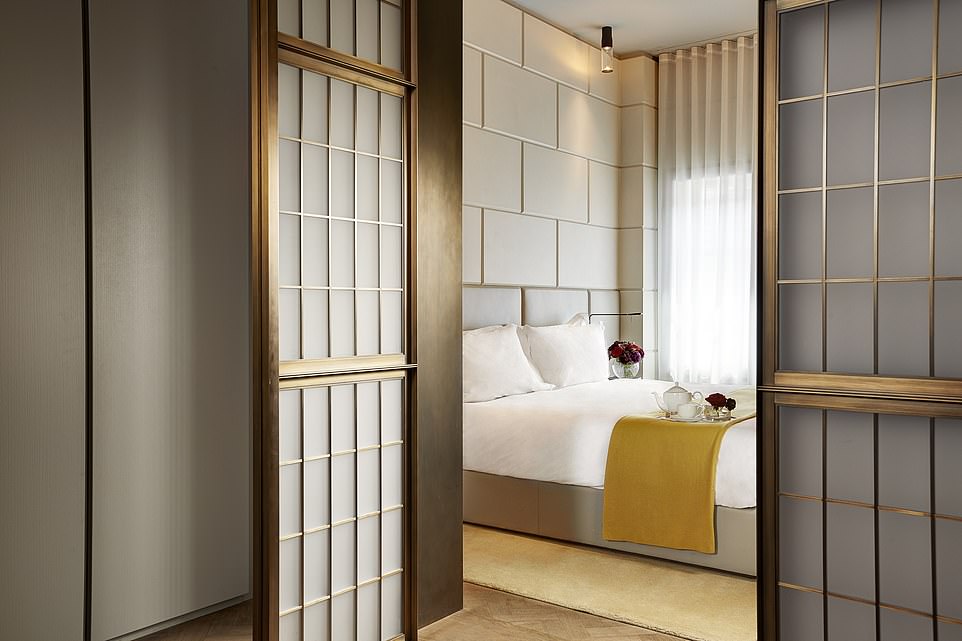 There are three Regent Suites in the hotel, with this image showing an alternative to Ted’s

Then it was back through the lobby to the living room, which also commanded views of Piccadilly Circus.

I’ve lived in London for a couple of decades so these sights are familiar, but it was thrilling to see them so clearly from this fifth-floor eyrie, like seeing them anew, and satisfying to have views of them ‘on tap’ while cocooned in whisper-quiet opulence – the room was soundly sound-proofed.

It wasn’t just the views and hushed ambience that impressed, though. 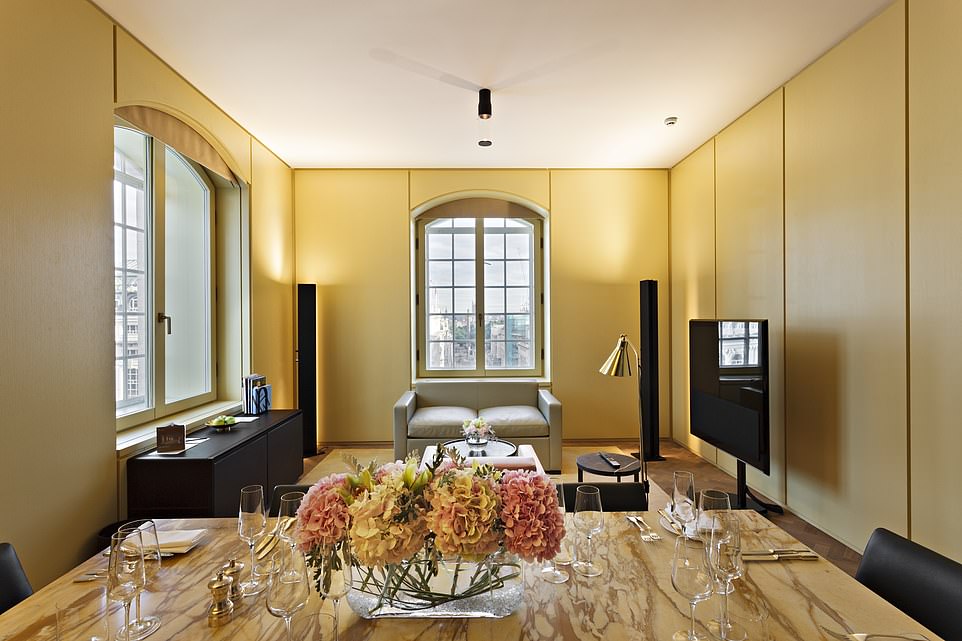 The dimensions were jaw-dropping. The suite, one of 49 in the 160-room hotel, covers 90 square metres (968 square feet), which is around the size of my two-bedroom south London flat.

And the design is a masterstroke, with walls of rusticated Portland stone making it feel wonderfully Regent Street. The grand outside… inside.

I was also bowled over by the beautiful wooden floor, stunning Carrara marble bathroom with Diptyque toiletries, twin sinks and rain shower (though this needed a bit of descaler – powerful but slightly wonky jets of water), gigantic Bang & Olufsen TVs in the living room and bedroom and last, but not least, a bed so wide that crawling from side to the other felt like crossing time zones. 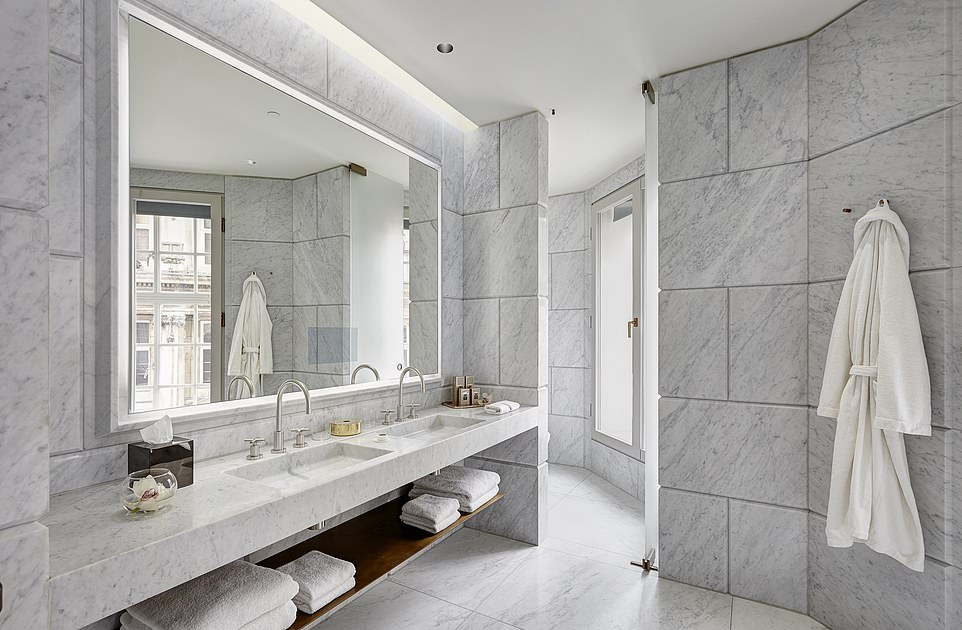 ‘I was bowled over by the beautiful wooden floor and stunning Carrara marble bathroom (pictured) with Diptyque toiletries,’ writes Ted breathlessly

In the evening my partner and I descended to Hotel Café Royal’s ‘commitment to culinary excellence’ – Cakes & Bubbles, a Regent Street-facing concept by the ‘World’s Best Pastry Chef’, Albert Adrià, he of three-Michelin-star El Bulli fame.

We discovered that it was indeed culinarily excellent.

Between two and 6pm the focus is on desserts, but it also currently rustles up the hotel breakfast offering and dinner. 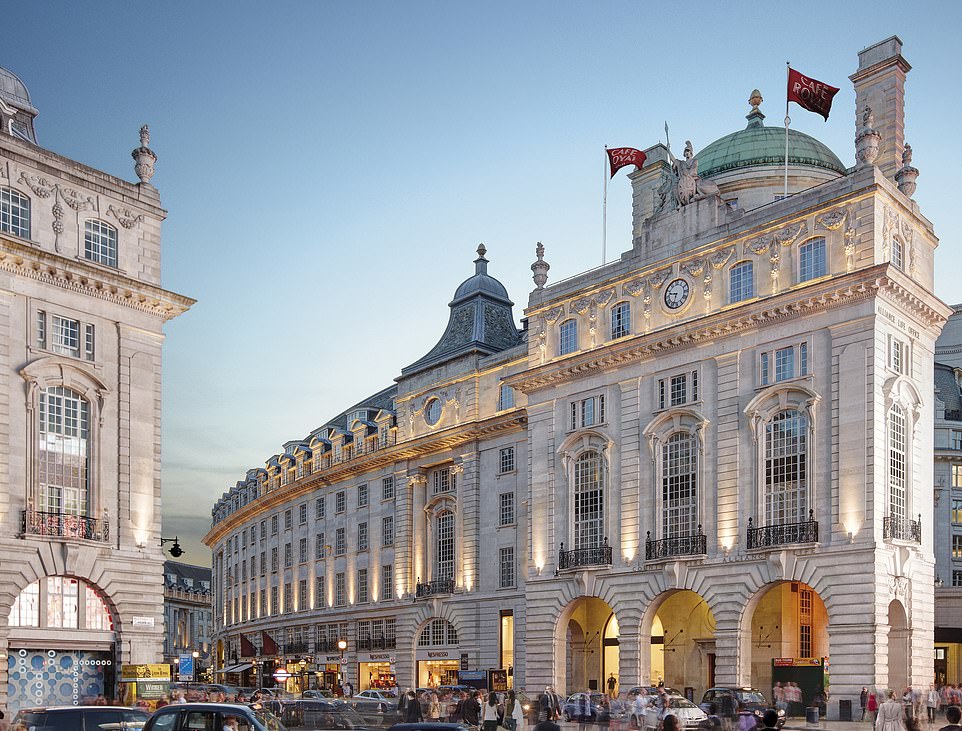 Ted’s Regent Suite windows are just to the left of the clock face, one floor beneath the top-ranking Dome Penthouse 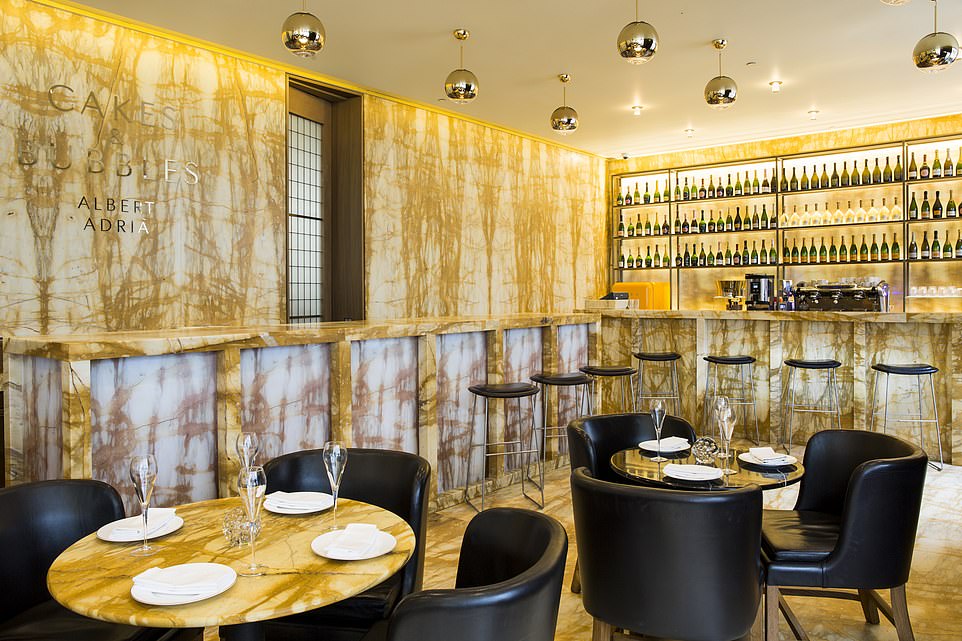 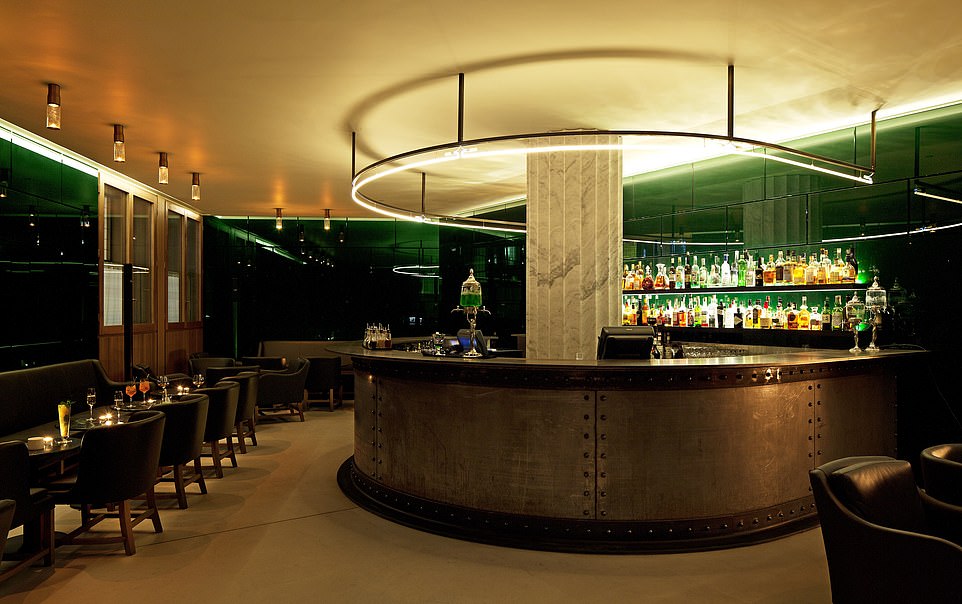 I was impressed by my sesame-crusted seared tuna with avocado starter and grilled Scottish fillet of salmon main. But the piece de resistance was the dessert cheesecake – an ingenious sweet and savoury cheesecake that looks just like a regular cheese from the outside.

A hat tip also for our bubbly Italian sommelier, Francesco, who talked us expertly through the wine list and kept my glass topped up with Nyetimber demi-sec and Ruinart Blanc de Blanc Champagne. And I was a big fan of the Joh Jos Prum Riesling he poured for the pudding.

Afterwards, we repaired to the uber-cool Green Bar for a brace of beautiful Bordeaux reds, which we quaffed to the accompaniment of some very accomplished live jazz from a piano/sax duo. 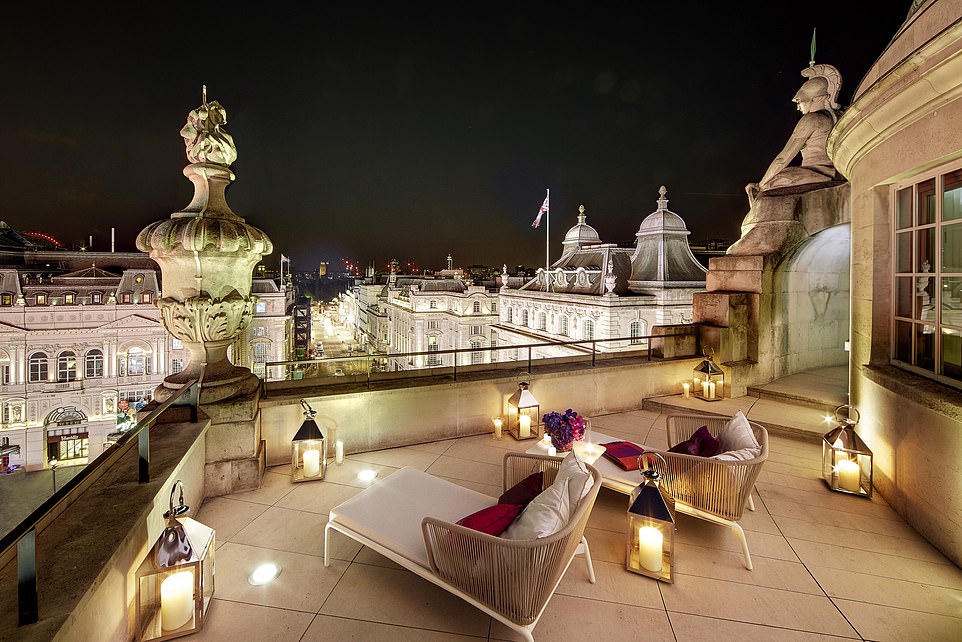 The balcony of the stunning Dome Penthouse, which costs from £7,000 a night. It offers a slightly loftier view of Piccadilly Circus and Regent Street St James’s than the Regent Suite 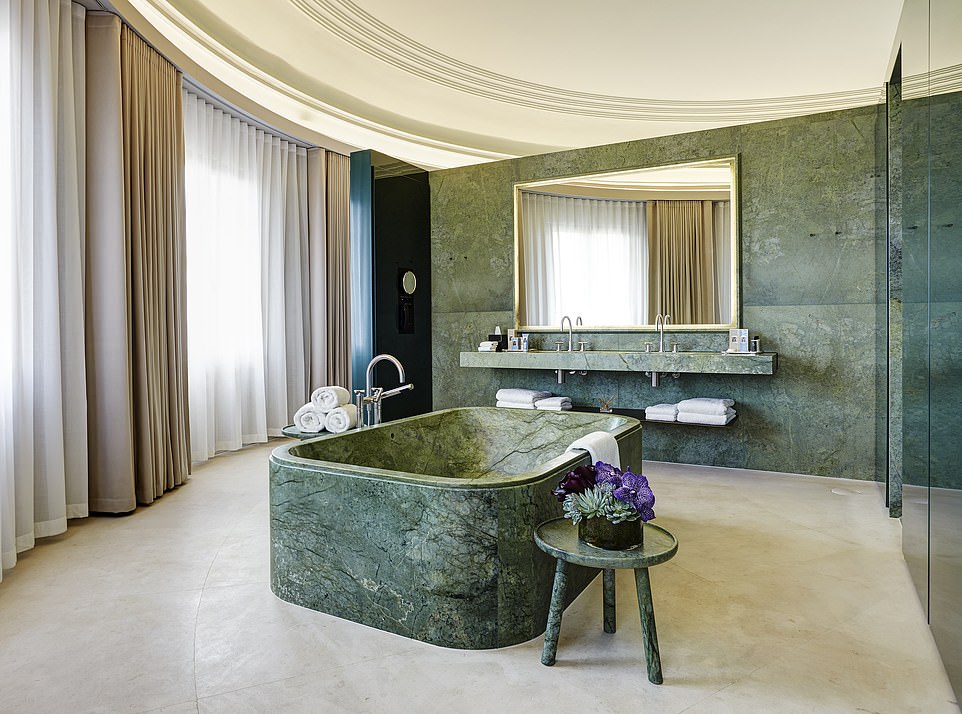 The hotel says that the Dome Penthouse (one of the three marble bathrooms pictured) ‘commands unrivalled views of London’s famous landmarks, because it’s one of them’ 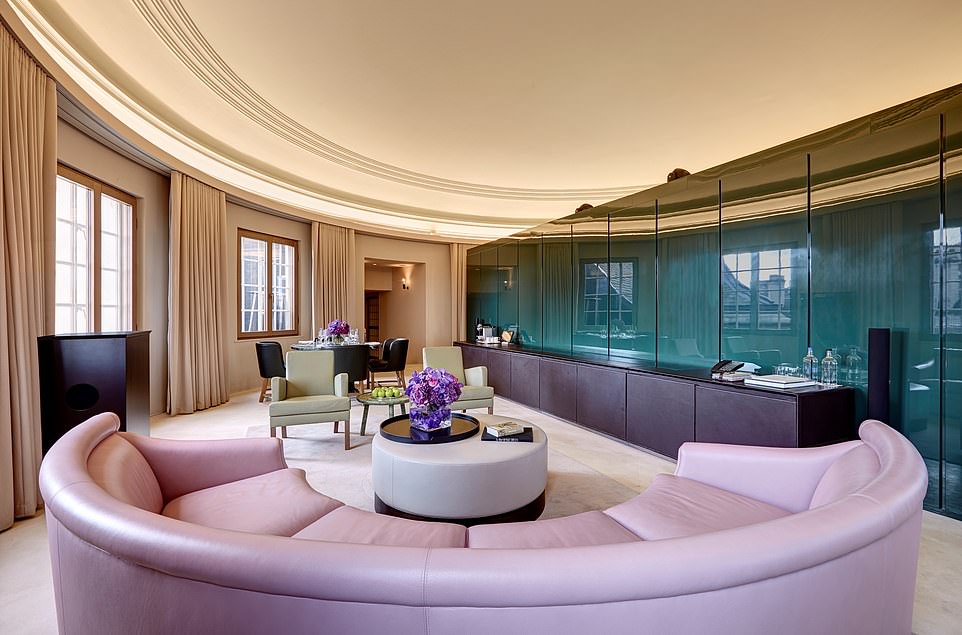 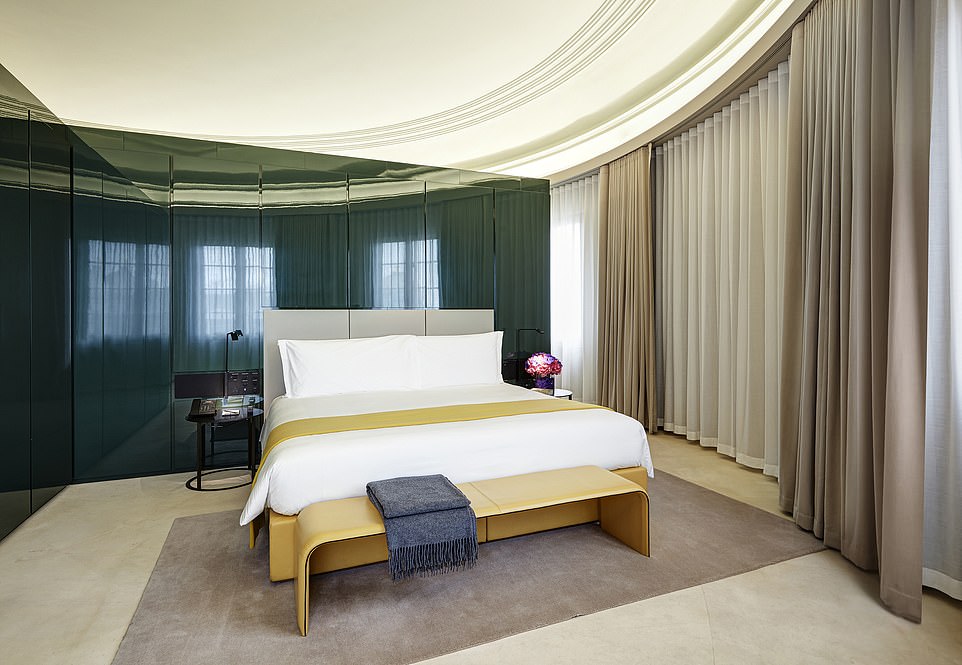 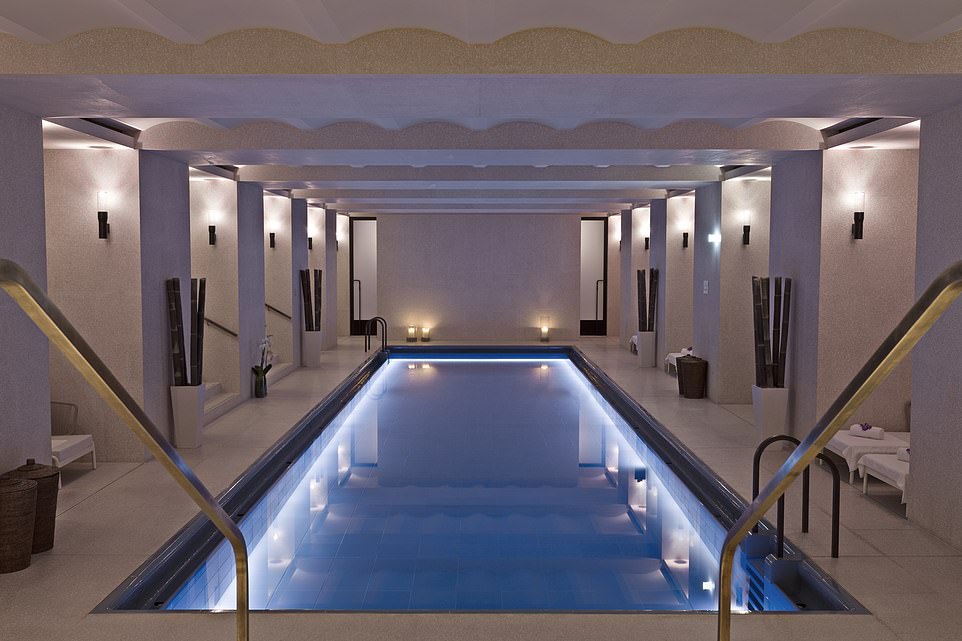 Cafe Royal was created by Frenchman Daniel Nicholas Thévenon and opened in 1865.

At one point it was reputed to have the greatest wine cellar in the world.

It was frequented by writers, painters, poets and politicians.

The Duke of York and Diana, Princess of Wales often took lunch at The Cafe and by the 1970s the roll call of famous guests included Brigitte Bardot, Elizabeth Taylor and Muhammad Ali.

In 1973 David Bowie retired his alter ego, Ziggy Stardust there with a huge party.

And it’s as epic as ever.

Breakfast was a joy, too – eggs with soldiers, delicious pastries, and multiple cups of coffee in fine William Edwards bone china cups speedily delivered with enthusiasm.

I was nicely alert after those – but not for long, for next on the agenda was a facial in the hotel’s epic subterranean spa – Akasha – which boasts an 18m/60ft-long lap pool, a watsu pool, hammam, sauna and hot tub.

I was destined for one of the treatment rooms, though, where I received my Men’s Ultimate Aromatherapy Facial.

It was so relaxing I fell asleep. Which apparently isn’t unusual, according to my stress-busting therapist.

After checking out my partner left me in the lobby while she did a spot of shopping, a task I undertook with pleasure, as this is a breathtaking space, a most glamorous £5million upgrade unveiled in 2018 that was overseen by architect and interior designer Piero Lissoni.

The crowning glory is a bespoke Murano glass chandelier that hangs from the centre of the room. 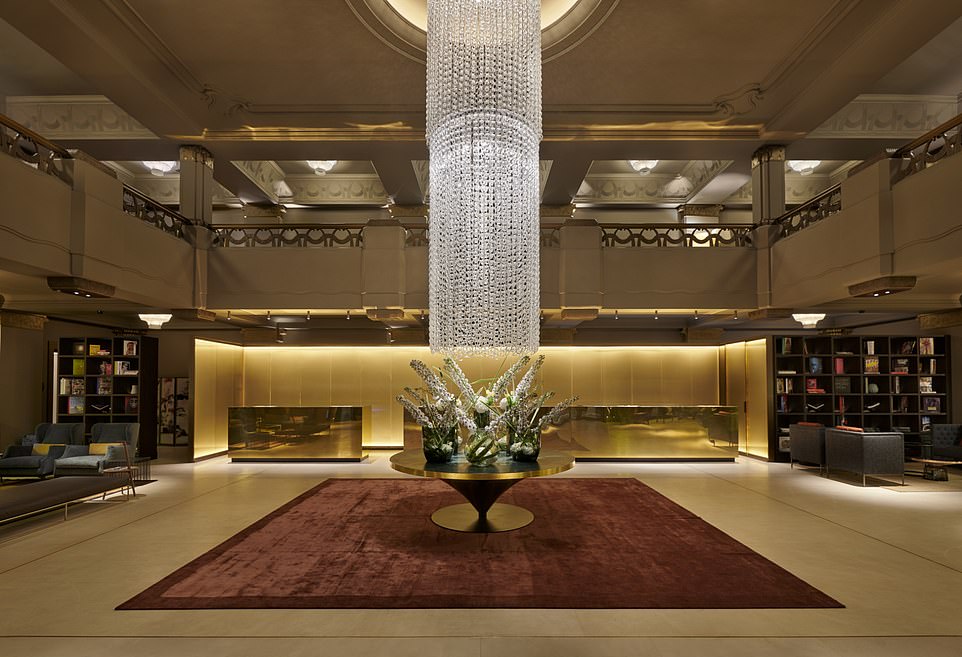 The lobby, a most £5million upgrade unveiled in 2018 that was overseen by architect and interior designer Piero Lissoni 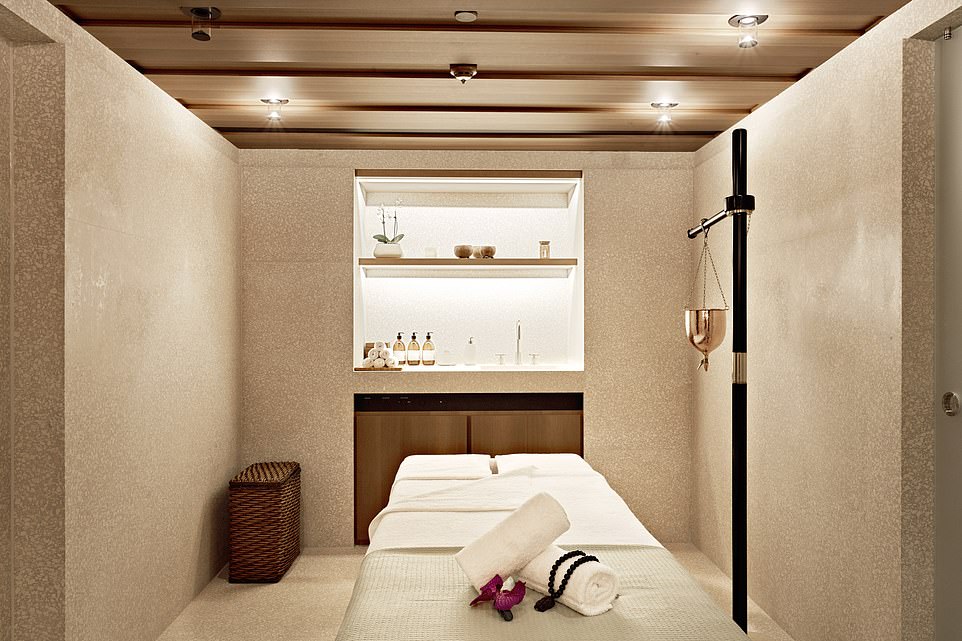 An Akasha treatment room. Ted had a facial in one – and promptly fell asleep 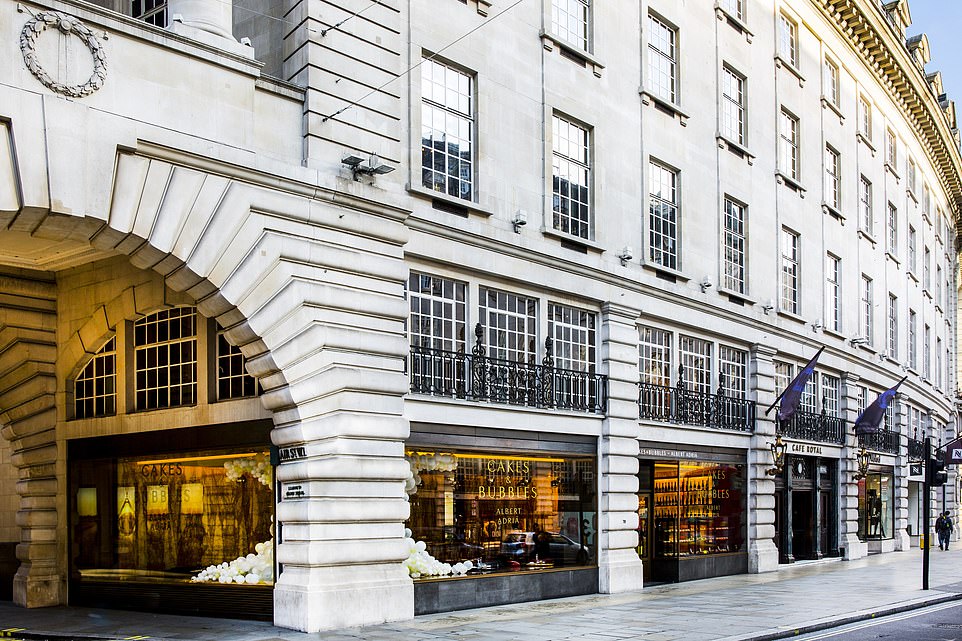 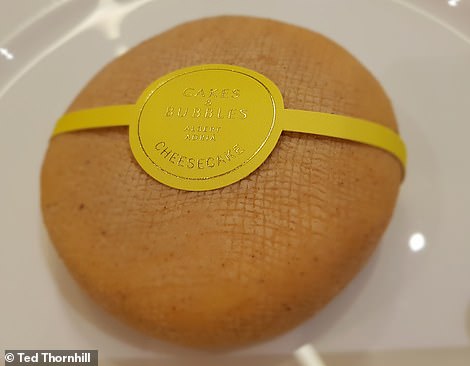 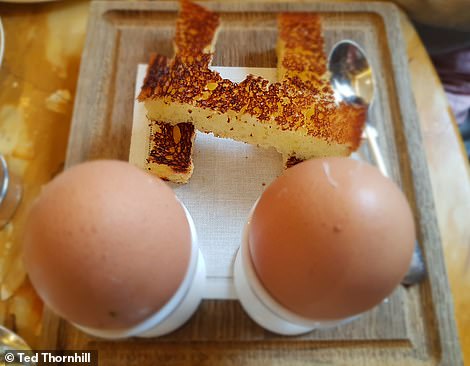 Pictured left is the amazing Cakes & Bubbles cheesecake and right, eggs and soldiers for breakfast at the same venue

As I sat mesmerised by its dazzling magnificence and watched the attentive doormen and reception staff politely attending to guests, I reflected that visitors to this spot from yesteryear, when the venue was the historic Café Royal restaurant and club – such as Winston Churchill and Oscar Wilde – would deeply approve of its transformation.

The hotel, which opened in 2012, is surely now one of the great places to stay in London.

As we walked across Piccadilly Circus to go home, we looked up at the windows to our fifth-floor suite.

Ted was hosted by Hotel Café Royal. The starting rate for the Regent Suite is £1,613 per night and the entry-level room rate (for a Superior Guestroom) is £469. The Dome Penthouse costs from £7,000 a night.

The hotel has launched a wellness escape package called ‘London Retreat’, with experiences including a pre-stay wellness phone consultation, aromatherapy massage and facial, and bone-setting treatments. From £725 per person based on two people sharing a room. Visit www.hotelcaferoyal.com/offers/the-london-retreat.