One in four headteachers are considering quitting because of the ‘stressful’ coronavirus crisis and the demands of getting children back safely, a survey of school leaders revealed today.

Around one in ten teachers are also thinking about leaving the profession, industry app Teacher Tapp has said.

Headteachers have spent the past month readying their schools for more pupils and ensuring children are kept in ‘bubbles’ and two metres apart where possible. Many schools have also been open for key workers’ children through the crisis.

Teacher Tapp asked education professionals if the coronavirus crisis made them  more or less likely to leave, with 23 per cent of headteachers saying it had made it more likely. The figure was ten per cent for teachers.

Just one per cent of headteachers felt less likely to leave, and the figure was three per cent for teachers.

A Teacher Tapp spokesman said: ‘Head teachers are often more likely to have paid off their mortgages and less likely to have children at home meaning they are financially more able to leave the job.

‘However, they are often the most committed and the ones most likely to say they feel they will stay in the profession long-term. This is therefore not good news’.

Hundreds of thousands of reception, year one and year six pupils returned to school on Monday – but an estimated 1.5million children didn’t come back because of worried parents or schools unable to make room for them.

A primary school has been forced to close after seven members of staff tested positive for coronavirus.

Arboretum Primary School in Derby will now undergo a deep clean before allowing pupils and staff to return. 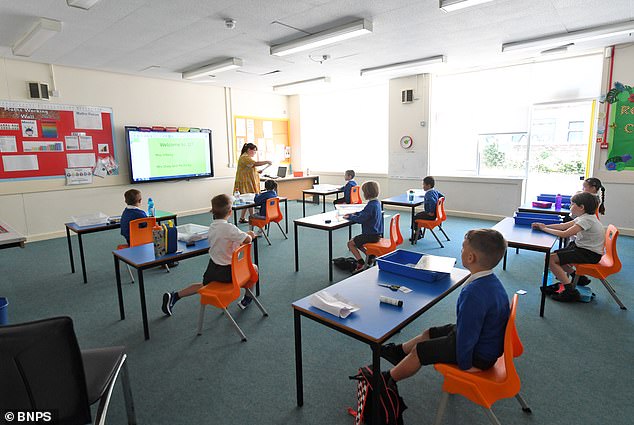 Boris Johnson was dealt a major blow to his plans to have all primary school students return before the summer holidays after education leaders said it would be ‘impossible’ for some schools to have children back safely. Pictured: Pupils at St Michael’s C Of E Primary School in Bournemouth

Boris Johnson was last night dealt a major blow to his plans to have all primary school students return before the summer holidays after education leaders said it would be ‘impossible’ for some schools to have children back safely. Pictured: Pupils at St Michael’s C Of E Primary School in Bournemouth

The school had been open throughout lockdown for the children of key workers. It had been due to start accepting more pupils this week, in line with government guidelines, but will now close until next week.

Derby Diocesan Academy Trust (DDAT), which runs the school, said one member of staff had started showing symptoms. Tests were then carried out on people they had come into contact with and six more employees were found to be positive for Covid-19. Four other members of staff tested negative for the virus. No children or parents have been displaying symptoms, the Trust said.

In a statement, a spokesman said: ‘DDAT can confirm the temporary closure of Arboretum Primary School this week, due to a number of staff having confirmed cases of Covid-19.

‘Following one member of staff reporting symptoms, the school quickly identified any other members of staff, parents/carers and/or children who may have been in contact and instructed them to isolate for the Government’s recommended period of 14 days.

‘There have been no reports of parents/carers or children displaying symptoms.’

The school, in the Normanton area of the city, caters for more than 600 pupils aged from two to 11. It was rated good by Ofsted at its last inspection, in November 2017.

The Trust said members of staff affected have experienced only mild symptoms and are recovering well at home.

It added: ‘In line with guidance, the school has closed this week to allow a deep-clean to be completed and will reopen next week, initially to children of key workers and vulnerable children.’ One local resident said on Monday: ‘I thought there was something wrong because this morning there were no cars in the car park and the school was shut.

‘Recently, I have seen children going there and so it was odd that it was shut this week when schools are supposed to be reopening.’ The Normanton area is one of the worst affected areas in the city, with at 15 deaths linked to coronavirus.

‘The school will re-open on Monday June 8 and all of those adults who may have been in contact with the affected staff have been informed.’