Coronavirus has claimed the lives of more than a quarter of a million Americans, as of Wednesday night, marking a sobering milestone just under 11 months since the first case was identified in the U.S. on January 20.

The U.S. remains the country with the most fatalities in the world, its 250,029 deaths exceeding the death toll of the next-hardest hit country, Brazil, by more than 83,000, according to Johns Hopkins University.

It comes as cases and hospitalizations continue to climb steeply, with a record 76,958 people being treated for in U.S. hospitals as of Tuesday, and nearly 162,000 new infections.

Cases are rising in 51 states and territories in the US and the official count of 11,485,176 infections is almost certainly an undercount. Pandemic modelers now estimate that 12 percent of all Americans have been infected.

Deaths continue to trend upward nationally with 1,700 Americans dying yesterday of COVID-19. The daily death toll is still below the peak 2,500 deaths recorded in April during the initial peak of the virus.

With the ever-increasing hospitalizations, Dr Ali Mokdad, an epidemiologist and disease modeler at the University of Washington’s Institute for Health Metrics and Evaluation (IHME) told DailyMail.com that daily fatalities will likely rise.

However, in-hospital mortality rates remain about 30 percent below what they were in the spring, suggesting deaths will not return to that peak so long as hospital systems don’t become overwhelmed.

In some parts of the country – especially rural areas with fewer medical facilities and health care providers – that danger is starting to look more possible.

The COVID-19 crisis continues to deepen across the United States, with cases, hospitalizations and deaths surging and hotspot North Dakota currently seeing the most infections and fatalities per capita than any other country.

While the surge is widespread, the Midwest is particularly hard hit with hotspot states, including the Dakotas, Iowa and Wisconsin, recording the most cases and deaths per capita in the last week.

North Dakota has had the most new infections and deaths per capita in the last week with 180 infections per 100,000 and 1.8 deaths, according to CDC data.

More than 250,000 Americans have now died of COVID-19, including 1,700 on Tuesday, as the daily death toll creeps up – but remains well below the horrific spring peak 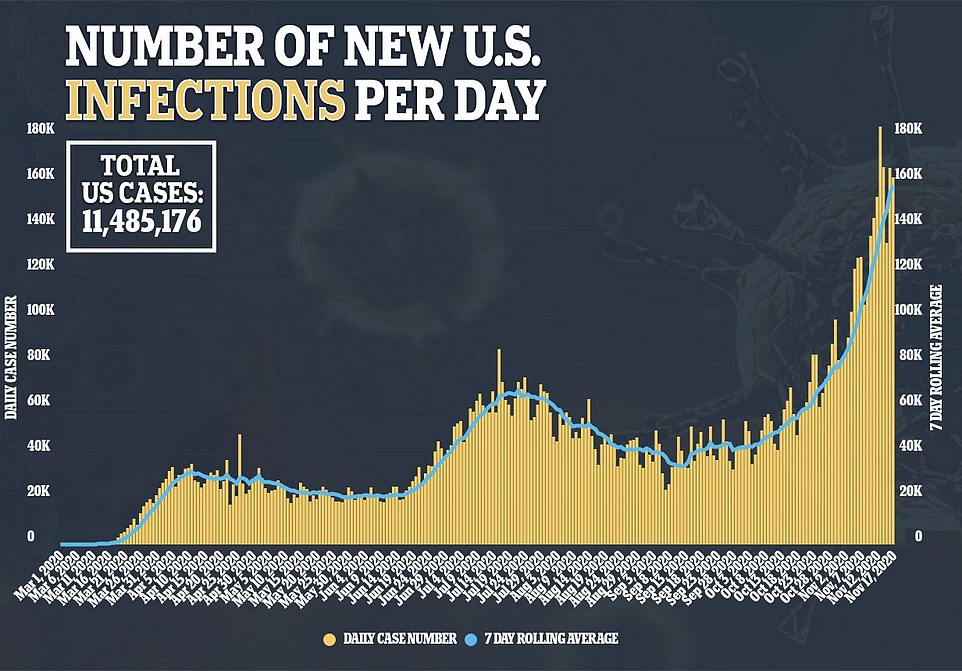 Daily infections are surging across the country, with 162,000 new cases identified on Tuesday alone

In the last week, nine US states – mostly in the Midwest and led by the Dakotas – have seen more COVID-19 infections that any other part of the country, according to an analysis of Johns Hopkins data from the Federation of American Scientists.

North Dakota has also had the highest number of deaths per capita in the world in the last week.

Eighteen of the top 50 places with high death rates per capita globally have been in the US in the last week.

The World Health Organization considers rates above 5 percent concerning because it suggests there are more cases in the community that have not yet been uncovered.

With Thanksgiving coming up next week, public health officials are bracing for a holiday-fueled surge and doctors are urging families to stick to small gatherings as overwhelmed hospitals across the country struggle to cope.

In its weekly internal report, the White House coronavirus task force warned of an ‘aggressive, unrelenting’ spread of COVID-19 across the country ‘without evidence of improvement but rather, further deterioration,’ a senior administration official said Tuesday. 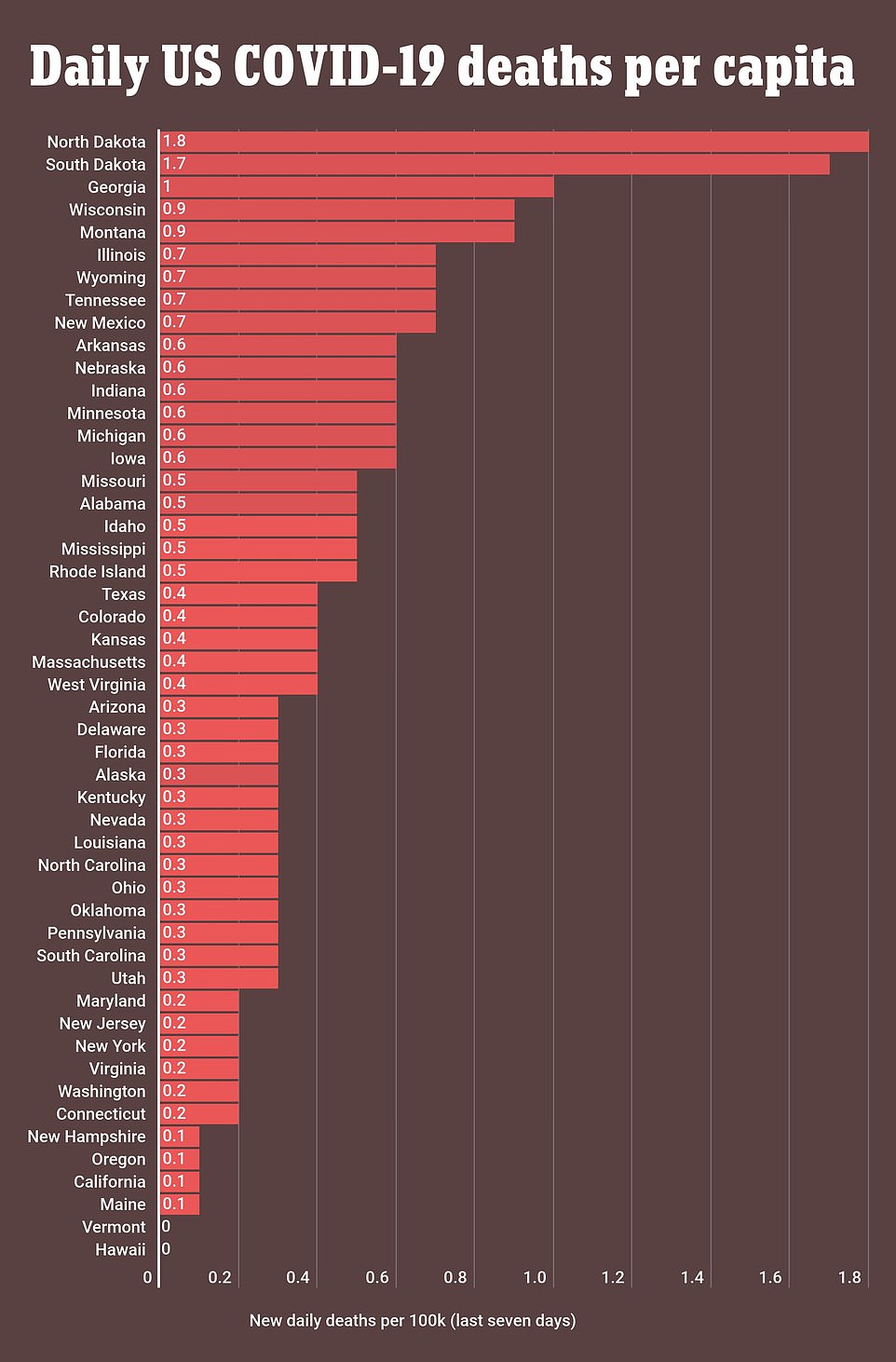 This chart tracks the states with the highest number of daily COVID-19 deaths per 100,000 in the last seven days. North Dakota has had the most deaths per capita in the last week with 1.8 fatalities per 100,000, according to CDC data 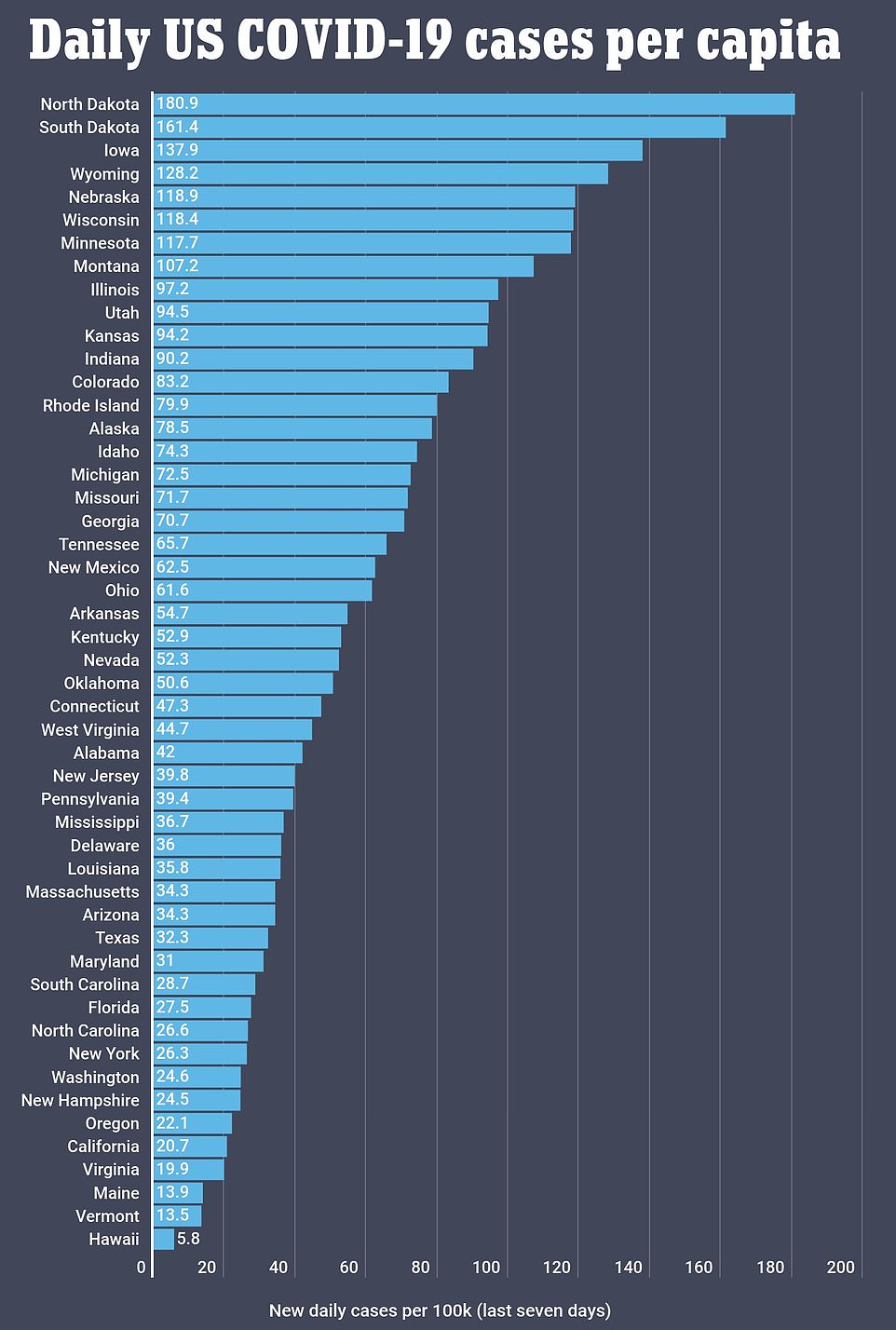 The officials said the task force concluded that existing efforts to slow the spread ‘are inadequate and must be increased to flatten the curve’ and that Thanksgiving travel and gatherings could ‘amplify transmission considerably’.

The deadly rise in COVID-19 cases across the US is forcing state and local officials to adjust their blueprints for fighting the virus, with Republican governors adopting mask mandates – skeptically, in at least one case – and schools scrapping plans to reopen classrooms.

Since the election, Republican governors in hard-hit Iowa, North Dakota and Utah have reversed course and put in place requirements on masks, and others have extended or expanded earlier orders.

In Iowa, Gov. Kim Reynolds had pushed back against a mask mandate for months but imposed a limited one Tuesday, becoming the latest GOP holdout to change course on face coverings.

In South Dakota, Republican Gov. Kristi Noem has said she has no plans to issue mask requirements, arguing they have not been proven to halt the spread of infections. 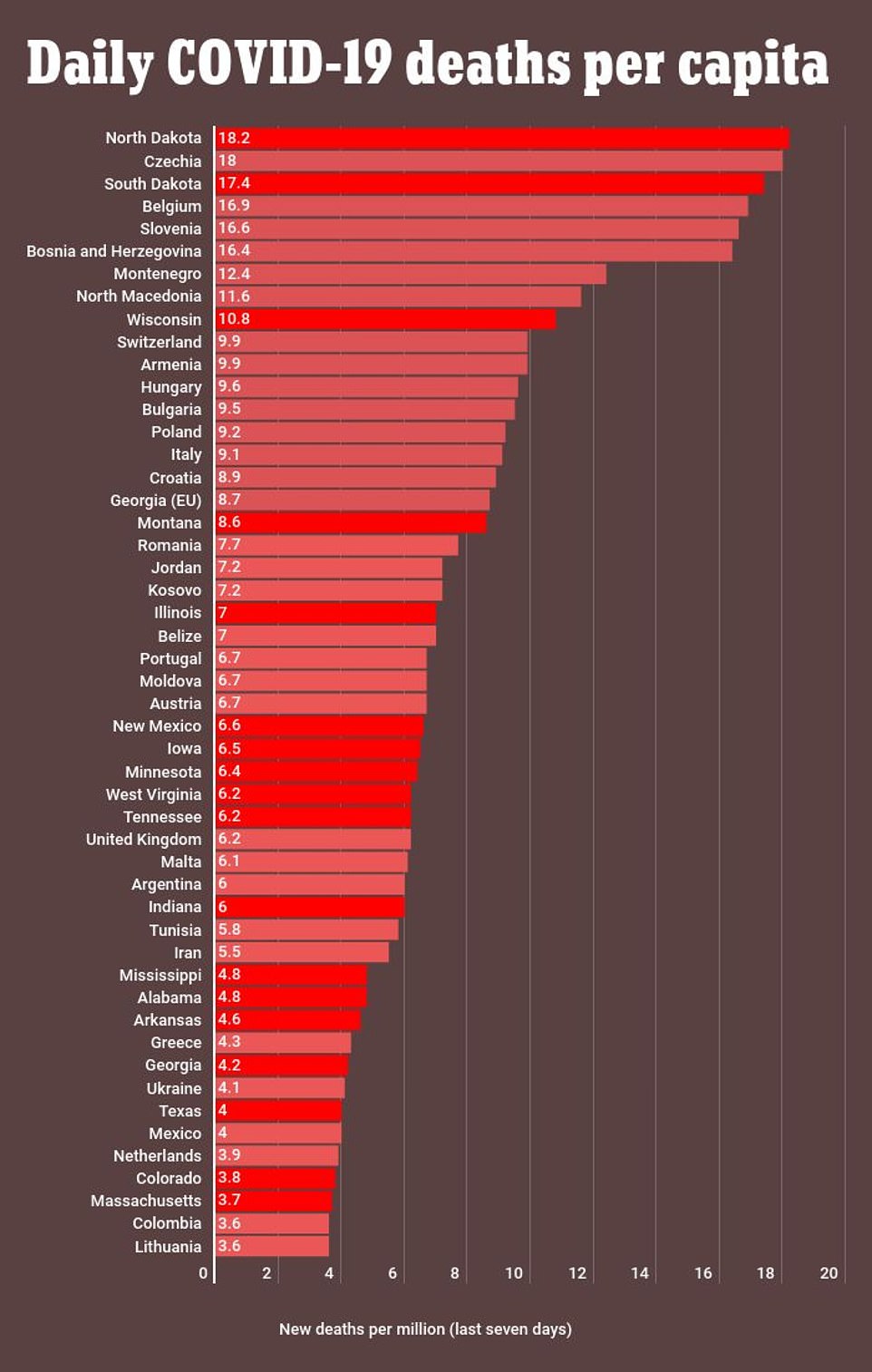 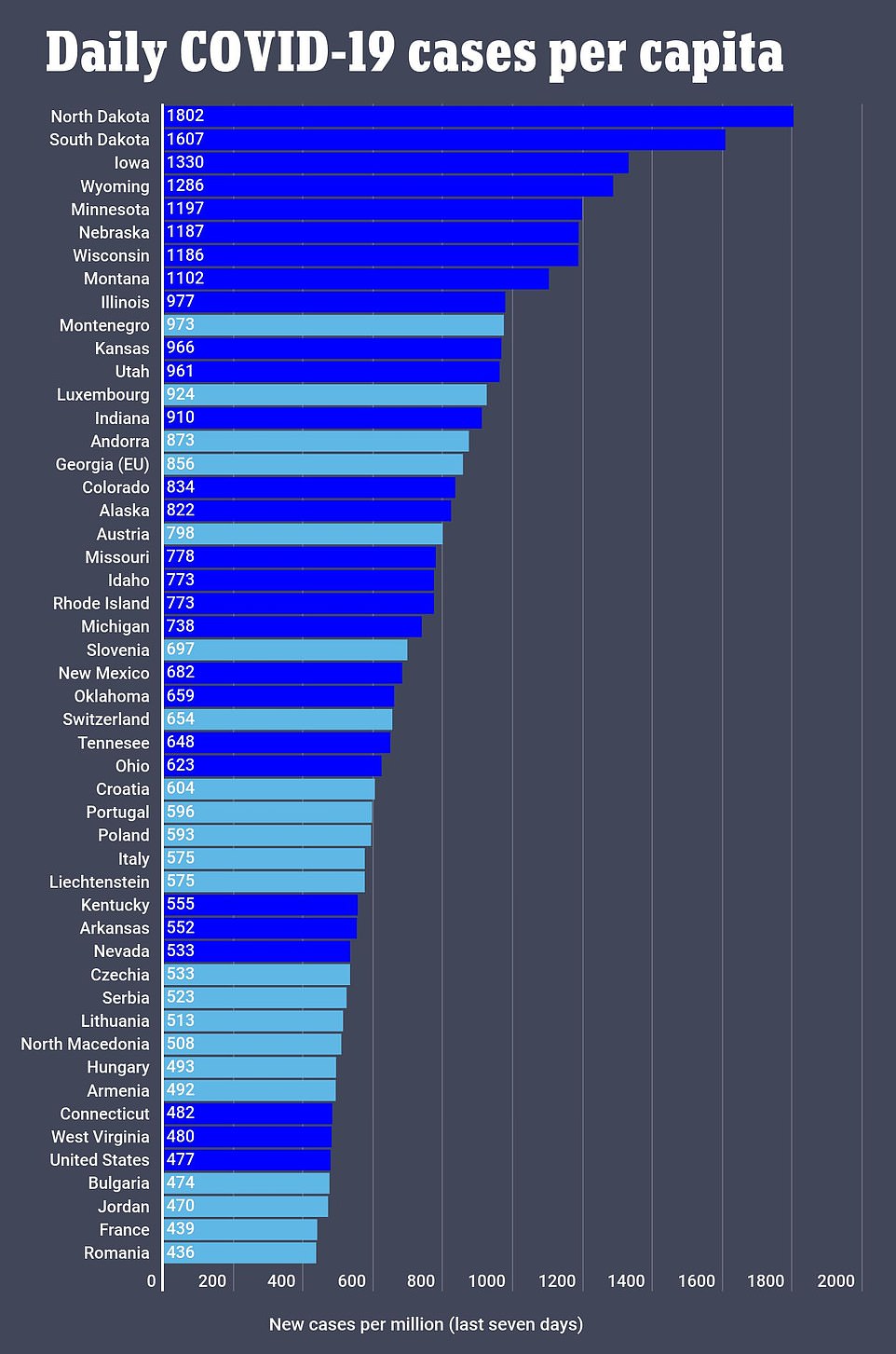 In the last week, nine US states – mostly in the Midwest and led by the Dakotas – have seen more COVID-19 infections that any other part of the country, according to an analysis from the Federation of American Scientists

The largest group representing South Dakota doctors is supporting a statewide mask mandate as several cities have moved to require masks in public. The South Dakota State Medical Association has been urging people to voluntarily wear masks but updated its stance to ‘strongly support’ a statewide mandate.

Dr Shannon Emry, a healthcare worker in South Dakota, told CNN that she believes a mask mandate in the state could help slow the spread and ease the pressure on already overwhelmed hospitals.

‘Our governor has been misleading her constituents. From the start, she has downplayed the dangers of the virus, downplayed the importance of wearing a mask and it has really undermined the people’s trust in their medical community,’ Emry said. ‘By doing that, she’s putting people in danger.

‘Our hospital systems across the state are already at capacity, are already at this critical state. The health care workers are obviously exhausted and the devastating thing for them is that we don’t see an end in sight. There’s not a stop date, there’s not a timeline.’ 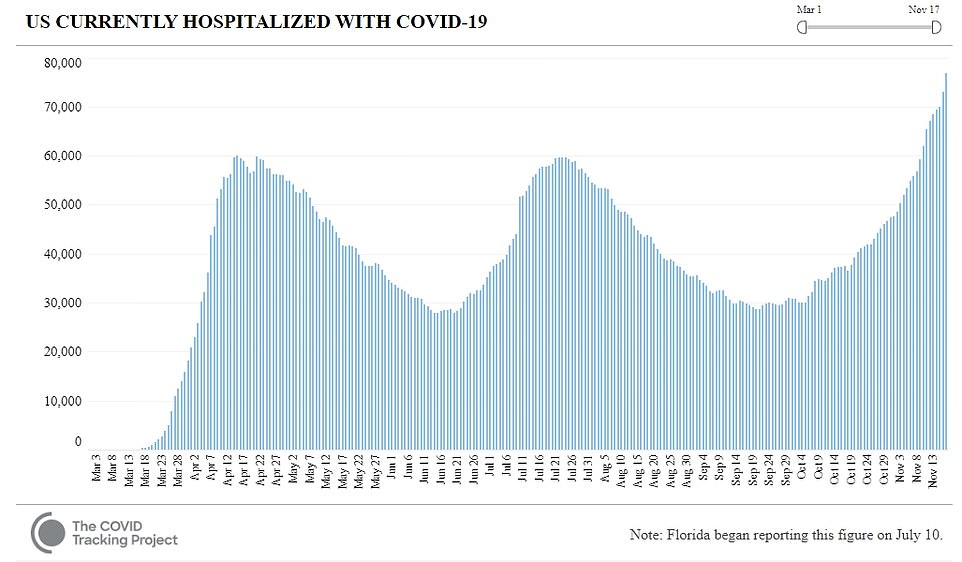 Hospitalizations once again set record highs on Tuesday with 76,000 patients being treated

Wisconsin Governor Tony Evers, a Democrat, on Wednesday declared a state of emergency for the state and extended his mask mandate into 2021. His attempts to curtail the virus in Wisconsin have been met with resistance from Republicans and the state’s business community.

Evers’ ‘safer at home’ order issued in March was challenged by Republican lawmakers and ultimately struck down by the Wisconsin Supreme Court. His statewide mask mandate, in place since August, is being fought by lawmakers and a conservative law firm.

Minnesota Gov. Tim Walz has also announced new restrictions, including shutting down indoor dining at bars and restaurants, closing gyms and fitness centers, and putting organized indoor youth sports on hold for four weeks. Walz said the state is trying to ease the strain on hospitals.

Meanwhile governors in Ohio, Maryland and Illinois imposed restrictions on business hours and crowd sizes on Tuesday, while their counterparts in Wisconsin and Colorado proposed economic relief packages. Los Angeles County, with a population of 10 million, ordered similar business restrictions.

The US is facing what health experts say will be a dark winter because of the onset of cold weather and crowded holiday gatherings, as well as a disregard for mask-wearing and other precautions.

The rising infection rates are prompting some school districts to revert to remote learning or postpone a return to classroom instruction.

New York City has announced that its public schools will close from Thursday.

In South Dakota, the Rapid City-area school system plans to close all schools and move to virtual instruction on Wednesday. The district’s latest data showed 94 students and 47 staff with an active case of COVID-19, while 105 staff and 676 students were in quarantine following exposure.

In metro Las Vegas, the Clark County school district postponed plans to resume partial in-class instruction and will continue with remote learning through at least the end of the calendar year.

Still, former FDA commissioner Dr Mark McClellan said that the current spike in COVID-19 cases in the US would likely be ‘last big surge’ before a vaccine is readily available.

‘The months ahead are going to look better than the weeks ahead,’ he said. ‘Things are going to start gradually getting better.’

He said that things will improve by early 2021 when a vaccine becomes widely available.

Pfizer on Wednesday said it will apply for emergency use authorization from the FDA within days after final results from its late-stage trial of its COVID-19 vaccine showed it was safe and 95 percent effective.

The drugmaker made the newest claim about its vaccine just one week after initial results from the trial showed the jab was more than 90 percent effective.

It comes after rival US company, Moderna, on Monday released preliminary data showing its own vaccine was 94.5 percent effective.

Pfizer, which developed its vaccine with German partner BioNTech SE, said it now has the two months of safety data it needs to apply for emergency use from the FDA.

The US has already pre-ordered 100 million doses of the Pfizer vaccine and officials expect to have 20 million of them available by next month to start vaccinations if approved by the FDA.

The company said its final trial results showed that only eight people out more than 20,000 who got the vaccine caught coronavirus in the study, compared to 162 who were given a fake shot. A total of 10 people got severe COVID-19, one of whom had been given the real vaccine.

The better-than-expected data from the two vaccines, both developed with new technology known as messenger RNA (mRNA), have raised hopes for an end to a resurgent pandemic that has killed more than 248,000 Americans and wreaked havoc upon economies and daily life.

Officials have said they hope to have about 20 million vaccine doses each from Moderna and Pfizer available for distribution in late December.

The first shots will be offered to vulnerable groups like medical and nursing home workers, and people with serious health conditions.

An expert panel advising the CDC are meeting next week to determine the order of priority for vaccines distribution.

It will be months, however, before large-scale roll-outs begin.