Scientists say they’ve created a device that allows electricity to be generated from the shadows thanks to different illumination angles.

The shadow-effect energy generator (SEG), developed in Singapore, makes use of the contrast in illumination between lit and shadowed areas to generate electricity.

The low-cost flexible device, which powered a watch in experiments, even gives an advantage over commercially available solar cells by operating in dark areas.

A wearable SEG could make use of ambient light to potentially improve the versatility of devices such as smartphones and smartwatches.

The device also has the added bonus as a self-powered sensor for monitoring moving objects by tracking the movement of shadows.

The researchers have said the concept of harvesting energy in the presence of shadows is ‘unprecedented’.

‘Shadows are omnipresent, and we often take them for granted,’ said assistant professor Tan Swee Ching at the Department of Materials Science and Engineering, the National University of Singapore (NUS).

‘In conventional photovoltaic or optoelectronic applications where a steady source of light is used to power devices, the presence of shadows is undesirable, since it degrades the performance of devices.

‘In this work, we capitalised on the illumination contrast caused by shadows as an indirect source of power.

‘The contrast in illumination induces a voltage difference between the shadow and illuminated sections, resulting in an electric current.’

The SEG comprises a set of cells – each a 15-nanometre-thin film of gold deposited on a silicon wafer – arranged on a flexible and transparent plastic film.

Artist’s illustration shows a 3D image of the SEG cell, with a scanning electron microscope image in cross view (b). The SEG comprises a set of SEG cells arranged on a flexible and transparent plastic film. Each SEG cell is a 15nm film of gold deposited on a silicon wafer

The team conducted experiments to test the performance of the SEG, which uses illumination angles to excite electrons and generate a current.

Based on the lab trials, the team’s four-cell SEG was twice as efficient when compared with commercial silicon solar cells, under the effect of shifting shadows.

When the whole SEG cell was under illumination or in shadow, the amount of electricity generated was very low or none at all, but when part of the SEG cell was illuminated, a sizeable electrical output was detected.

‘We also found that the optimum surface area for electricity generation is when half of the SEG cell is illuminated and the other half in shadow, as this gives enough area for charge generation and collection respectively,’ said co-author of the study Professor Andrew Wee at NUS.

The SEG performs 200 per cent better than that of commercial silicon solar cells under the effects of shadows, the team said.

In experiments, the device generated 1.5 volts, which was enough to power an electronic watch.

In addition, the team also showed that the SEG can serve as a self-powered sensor for monitoring moving objects. 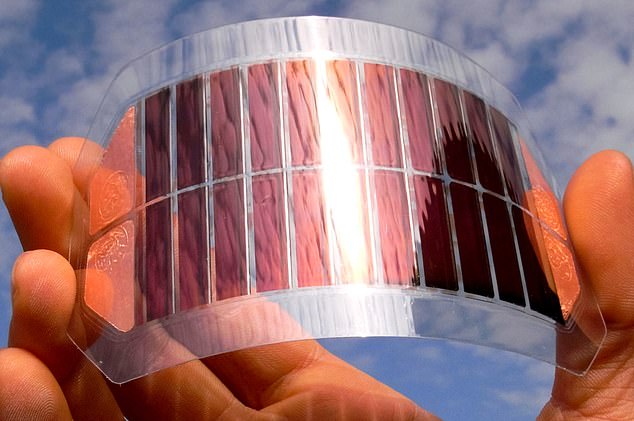 While commercially available solar cells can perform this role in an outdoor environment, their energy harvesting efficiency drops significantly under indoor conditions where shadows are persistent

When an object passes by the SEG, it casts an intermittent shadow on the device and triggers the sensor to record the presence and movement of the object.

Wearable power sources, such as solar cells, can boost the power of smart devices on the go and make them last for longer.

However, normal solar cells need a constant stream of sunshine to operate and are hampered by dim light – or no light at all.

In contrast, the SEG ‘scavenges’ the illumination contrast that arises on the device from shadows, and generates a direct current.

On a bigger scale, aside from wearable devices, the SEG technology could potentially be developed to make solar cells generate more power for a country’s energy supply when shadows fall.

In the next phase of research, the team will experiment with other materials, besides gold, to reduce the cost of the SEG, even though it can be fabricated at a lower cost compared to commercial silicon solar cells.

The costs of components used to make the SEG are around $30 to $50, compared with the hundreds of dollars used to make commercial solar panels per square metre.

The NUS researchers are also looking at developing self-powered sensors and SEGs that attach to clothing to harvest energy during normal daily activities.

Another area of research is the development of low-cost SEG panels for the generation of energy from indoor lighting.

The research was published in Energy & Environmental Science.

WHAT IS SOLAR POWER?

Solar power is the conversion of energy from sunlight into electricity.

Photovoltaics — the kind of solar panel you might see built into a calculator — are capable of directly converting light into electrical power.

In concentrated solar power systems, however, mirrors or lenses are first used to collect the sunlight that falls on a large area and focus it — creating heat that can be used to drive a steam turbine and generate electricity.

Optimum locations for solar farms include the arid tropics and subtropics, with deserts lying at such low latitudes often being cloudless and getting around 10 hours of sunlight each day.

According to NASA, the eastern part of the Sahara — the Libyan Desert — is the sunniest place on the Earth.

Solar power accounted for 1.7 per cent of the world’s electricity production in 2017, and has been growing at a rate of 35 per cent each year.