A Lim Kim made her first U.S. Women’s Open appearance a memorable one Monday, closing with three straight birdies to tie the record for the largest comeback and win the biggest event in women’s golf.

And in the final major of this pandemic-disrupted year in sports, she won wearing a mask.

Starting the final, frigid round at Champions Golf Club five shots behind in Houston, the 25-year-old South Korean wore a heavy down jacket between shots and delivered a 4-under 67 for a one-shot victory over Amy Olson and Jin Young Ko.

Kim became the seventh player to rally from five shots behind in the final round of the U.S. Women’s Open, and the first since Annika Sorenstam at The Broadmoor in 1995.

Olson held her own amid the grief of learning her father-in-law died unexpectedly in North Dakota on Saturday night. She was in tears Sunday morning on the range, before rain pushed the final round to Monday.

WATCH | Amy Olson gets an ace in 1st round: 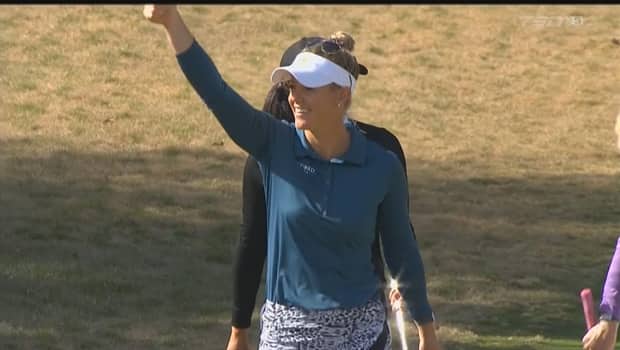 American Amy Olson had a hole in one during her opening round of the U.S. Women’s Open in Houston Thursday, on the 16th hole at the Cypress Course. 0:58

Olson, winless in seven years on the LPGA Tour, had a two-shot lead on the back nine after 54-hole leader Hinako Shibuno faltered. But she couldn’t do anything about Kim’s late charge, and Olson fell back when her hybrid on the par-3 16th bounded over the green and into thick, brown rough, leading to bogey.

She birdied the final hole for a 72 after Kim had already secured the title.

Ko, the No. 1 player in the world who only recently returned from South Korea where she rode out the COVID-19 pandemic, also birdied the 18th when it was too late to catch Kim. Ko closed with a 68, one of only six players to break par in the final round.

Shibuno closed with a 74 and finished two shots back.

Kim finished at 3-under 281 and won $1 million. She added to South Korean dominance of this major, the ninth winner in the last 13 years.