Beyond the Royal Palace of Amsterdam, the Netherlands is dotted with around 700 castles and country estates.

The charming properties are well worth exploring for their history, gardens or as places to stay in the gentle Dutch countryside.

A-list haunt: Kasteel De Haar near Utrecht is ringed by a moat and neat gardens

Reminiscent of Disney’s Cinderella Castle, this popular attraction (kasteeldehaar.nl, £15 for adults, £10 for children aged four to 12) near Utrecht is ringed by a moat and neat gardens.

The original fortress was a ruin until its owner married into the wealthy Rothschild family and commissioned Pierre Cuypers, the architect of Amsterdam’s Rijksmuseum, to design a grandiose summer home with 200 rooms.

Look up in the cathedral-like main hall to see medieval-style sculptures and stained glass windows. Brigitte Bardot, Gregory Peck and Roger Moore are among the A-list guests who have stayed here.

Room-only doubles from £107 a night at the nearby Logement aan de Vecht (logement.aandevecht.com).

IN THE FOOTSTEPS OF ANNE FRANK 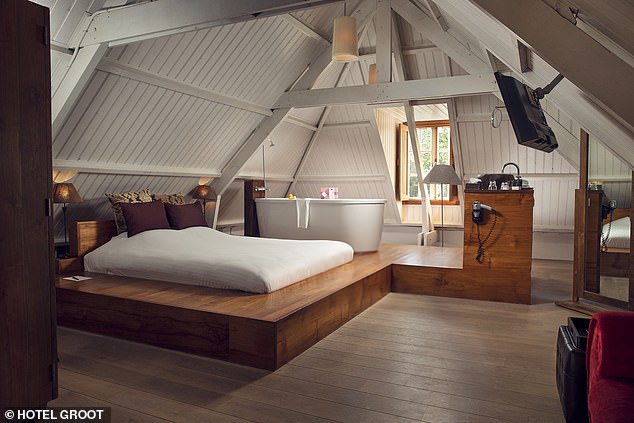 Groot Warnsborn was the last place where Anne Frank and her family enjoyed a country break before going into hiding. Pictured above is one of the rooms

Occupying woodland between Arnhem and De Hoge Veluwe National Park (and so well-placed for visiting the collection of Van Goghs at the Kroller-Muller Museum), Groot Warnsborn was the last place where Anne Frank and her family enjoyed a country break before going into hiding. A facsimile of a postcard written by Anne’s father hangs in the lobby.

Room-only doubles from £107 a night (grootwarnsborn.nl).

The Rhederoord estate occupies the southern fringe of the Netherlands’ oldest national park, Veluwezoom, ten miles north-east of Arnhem. The city’s mayor lived in the brickwork manor house, built in the 1740s, commuting from a now-demolished private railway station.

Two enormous Cape buffalo heads hang above the reception desk. The hotel has 22 modern bedrooms, while two white, semi-circular verandas, reminiscent of antebellum mansions in America’s Deep South, overlook the patterned hedges of the French-style garden to the rear.

The fine-dining restaurant in the former coach house serves multi-course tasting menus, including a reasonably priced three-course option for £31.

Room-only doubles from £76 a night (rhederoord.nl/en). 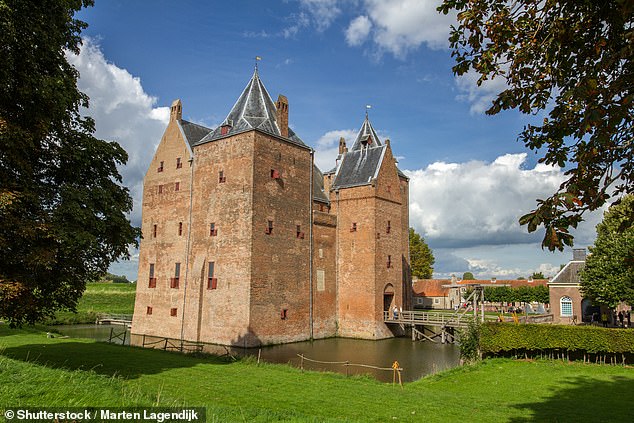 Life behind bars: Slot Loevestein near Utrecht was long used as a prison

Located 25 miles south of Utrecht, in countryside where feral herds of grey konik horses roam, Loevestein Castle (entry £12.50) dates from the 14th Century. Surrounded by a moat and low, grassy bastions, the brick-built fortress holds the quirky distinction of having been besieged by its owner, the Count of Holland, in 1397.

Long used as a prison, visiting means a chance to see the austere room where Hugo Grotius, a founder of international law, was incarcerated before escaping by hiding in a wooden chest. Accommodation is available in cottages by the castle gate.

CASTLE WITH A CHIC BISTRO

Set in woodland near Zeist, this castle is on the edge of the Utrechtse Heuvelrug National Park – named after a ridge shaped during the Ice Age. Construction of the castle began in 1904 and it features a crenellated tower. Now a hotel with 30 bedrooms, the interior features stonework coats of arms, arched windows and wood panelling reclaimed from much older buildings. The recently added conservatory houses a fine-dining restaurant and Bistoria, which serves exquisite dishes.

Room-only doubles from £96 a night (kasteelkerckebosch.com/en).

Bloemendal stands a couple of miles north of the Vaalserberg – the 1,058ft peak is the highest point of mainland Netherlands. The three-storey mansion is a 15-minute drive from Aachen and close to the German border. It was commissioned by cloth merchant Arnold von Clermont in the early 1790s.

Now a 77-room hotel, it has stylish modern bedrooms and an elegant restaurant with views over the gardens, which are open to the public.

Room-only doubles from £112 a night (hotelbloemendal.nl/en).

This castle (fraeylemaborg.nl, entry £6.25) is a 30-minute drive east of Groningen, on an estate where the landscaping was inspired by English parkland. Surrounded by a broad moat, the white-walled castle is reached by crossing a wooden bridge. The rooms, including a library, are decorated as they would have looked when the castle was occupied.

Ten quirky follies by contemporary designers are dotted across the estate. They include a straw temple, formed by hay bales, and a hazelnut-shaped hut.

Room-only doubles from £129 a night at the nearby Prinsenhof Groningen (prinsenhof.nl).

BREAK FOR THE BORDER

On an estate that straddles the Dutch-Belgian border, Neercanne overlooks the rolling fields and woodland of the Jeker Valley, south of Maastricht. The graffiti-scrawled caves beneath the terraced castle have long been used to store wine.

In 1957, Neercanne’s chandeliered restaurant was among the first in the Netherlands to be awarded a Michelin star. L’Auberge, under the vaulted arches of the former stables, offers a more moderately priced fine-dining (three courses for £48) at lunchtime.

Room-only doubles from £169 a night at the nearby Kruisherenhotel Maastricht (oostwegelcollection.nl/en/kruisherenhotel-maastricht). 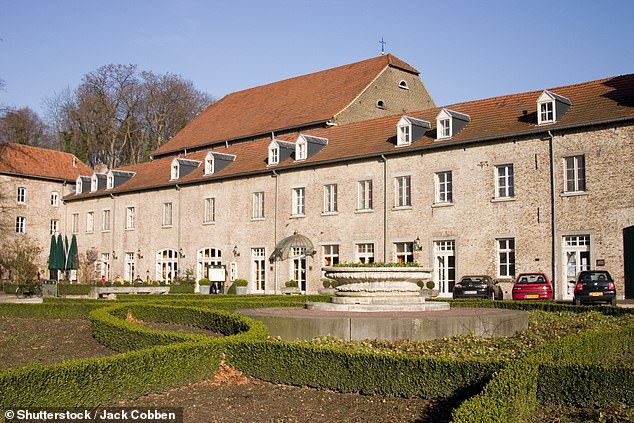 Elsloo Castle houses a hotel with 24 bedrooms, including compact doubles run through by sturdy wooden beams, and a restaurant serving French-influenced cuisine

The current incarnation of this ivy-clad castle stands in landscaped parkland, a 15-minute drive from Maastricht. It was built a couple of hundred yards from the original, which was destroyed by flooding in the late 16th Century during the Dutch fight for independence from Spanish rule. Its rounded tower was added in 1843.

The castle now houses a hotel with 24 bedrooms, including compact doubles run through by sturdy wooden beams, and a restaurant serving French-influenced cuisine.

Room-only doubles from £71 a night (kasteelelsloo.nl/en/).

Situated in Muiden, this can be reached in under an hour from Amsterdam using public transport. With rounded towers and high walls, it’s unsurprising the castle (muiderslot.nl/en, entry £14) is frequently used for filming scenes set during the Middle Ages.

Time-darkened oil paintings and suits of armour are displayed inside the moated fortress, which dates back to the 13th Century. Children might enjoy donning medieval-style costumes and following the discovery trail around the castle and its gardens.

Room-only doubles from £61 a night at the nearby NH Naarden hotel (nh-hotels.com/hotel/nh-naarden).