Is there anything more decadent than reclining in a gently bubbling hot tub, ice-crushed pina colada in hand and gazing out on a panoramic view of the Aegean Sea? I didn’t think so. But a week on board Celebrity Apex on a cruise around the Greek islands forced me to reconsider.

There are two such hot tubs on this 1,000ft-long ship. They are magical places to watch the sun go down, the moon come up, land disappear into the distance, new islands appear on the horizon.

In what I soon learnt was typical Celebrity Apex extravagance, they are shaped like giant martini glasses, suspended on stems several feet high, just to make the vantage point that little bit more spectacular.

Before boarding Celebrity Apex for a jaunt around the Greek islands, the closest Rachel Rickard Straus had come to a cruise was a one-hour crossing to the Isle of Wight 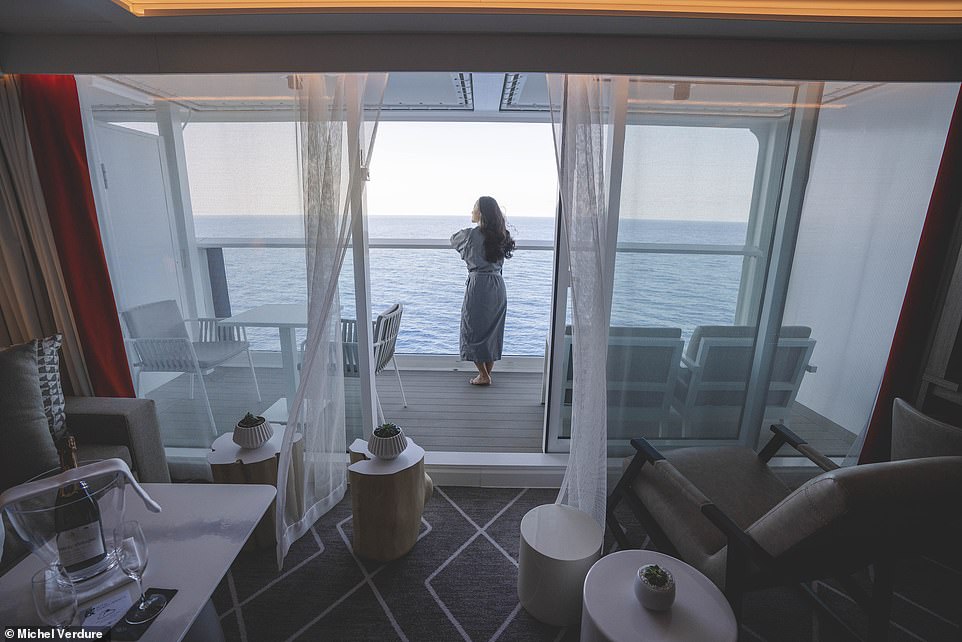 Rachel writes: ‘I’d swotted up on cruises in preparation [for the trip], but no amount of reading could have prepared me for the decadence and abundance of it all.’ Above, a model in one of the Celebrity Apex rooms 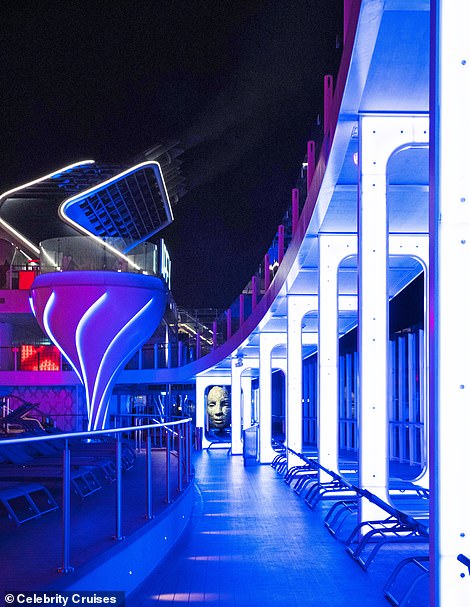 One of the ship’s martini-glass-shaped hot tubs

This was my first-ever cruise – a one-hour crossing to the Isle of Wight with the only delicacy a packet of ready salted crisps was the closest I’d previously been to such luxury.

I’d swotted up on cruises in preparation so on boarding I was impressed, but not surprised, to find a large swimming pool, several fine dining restaurants, a theatre, club and bars, and fancy designer shops.

No amount of reading could have prepared me, though, for the decadence and abundance of it all.

Take the Magic Carpet outdoor bar. Here you can watch the sun set as you sip champagne, gorge on oysters and admire how beautiful everyone looks in that warm, glowing light. Enough to delight anyone, surely.

But this is Celebrity Apex. So in addition – and for no functional reason that I could ascertain – the bar is cantilevered off the side of the ship so it can move up and down the decks of the ships throughout the voyage.

Then there is the Craft Social Bar. Any beer drinker would be more than satisfied with its impressive array of ales and knowledgeable beer sommelier. But here, pint glasses are filled from the bottom up. 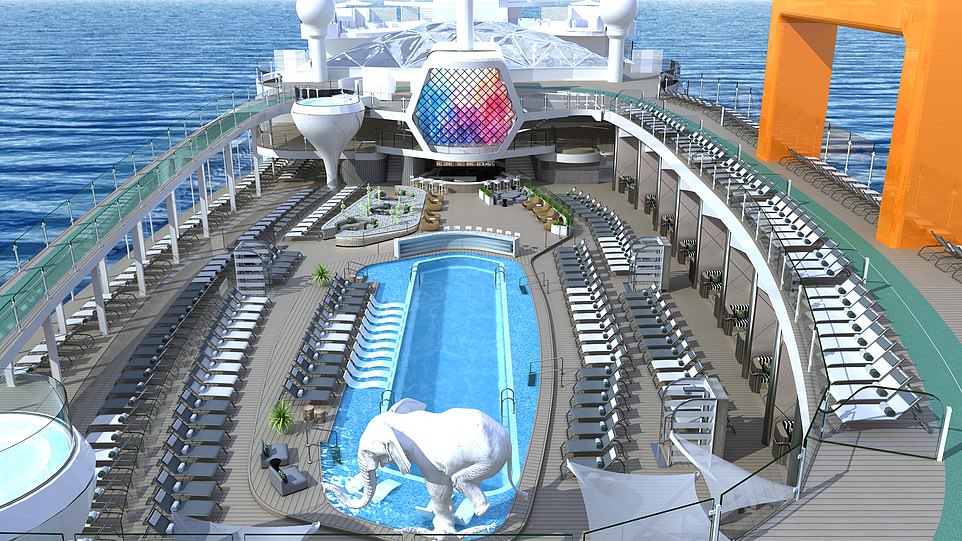 Features that make a splash: The ship has four main restaurants, a big swimming pool, a theatre, club and bars, and fancy designer shops 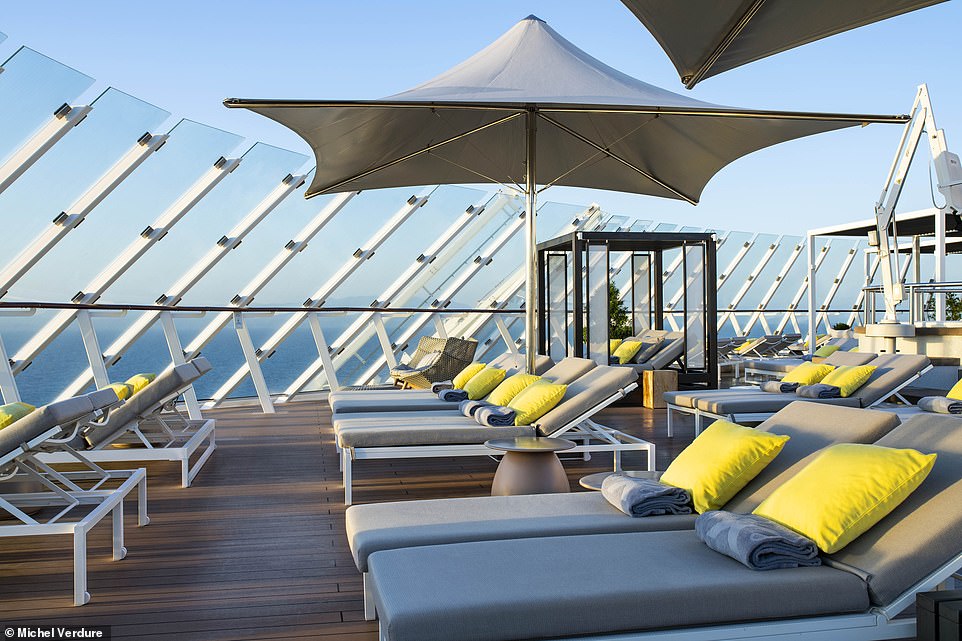 Hit the deck: A glass-walled deck on the ship allows cruise-goers to soak up the views from their sun loungers 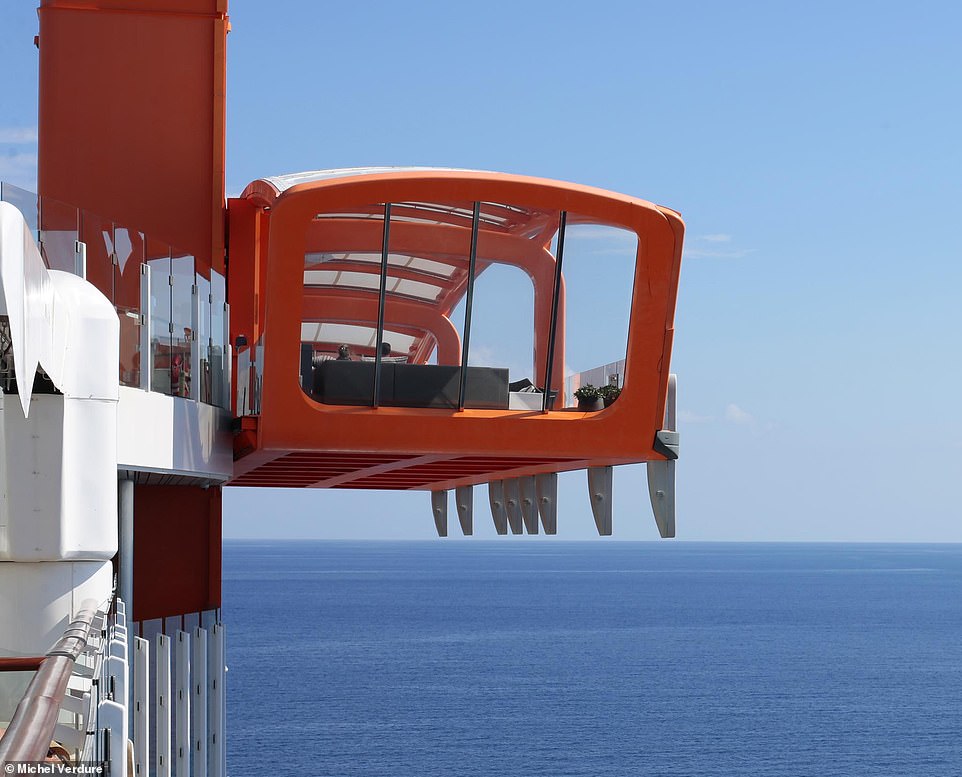 A special magnet system allows ale to be shot up through a hole the bottom of the glass, which is then automatically plugged when the glass is full. I’m told this makes for a better pint, but I suspect it’s more for theatricality than taste.

Meanwhile at Le Petit Bistro, guests are treated to delicious French cuisine that would tantalise the most discerning palette. Yet the dining experience is more a concept than a meal.

When diners sit down to eat, their table is transformed into an audiovisual experience in which characters are projected on to their white plates where they appear to grow and cook the meal in front of you.

Even after a week on board, my mum (who accompanied me) and I were still finding new sculptures, bars and details designed to both delight and enthral us. 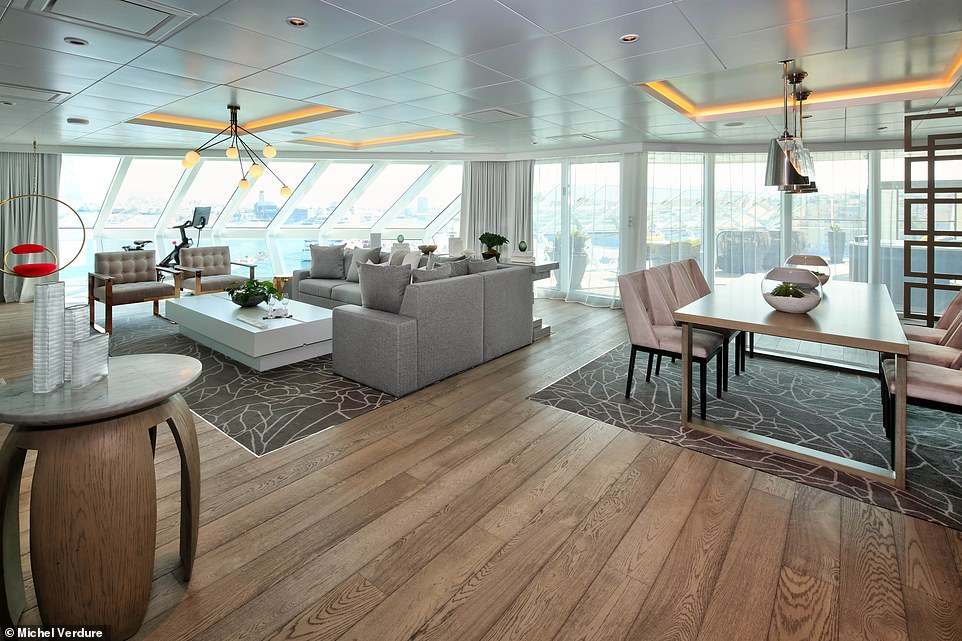 Spectacular: The living room area inside one of Celebrity Apex’s suites 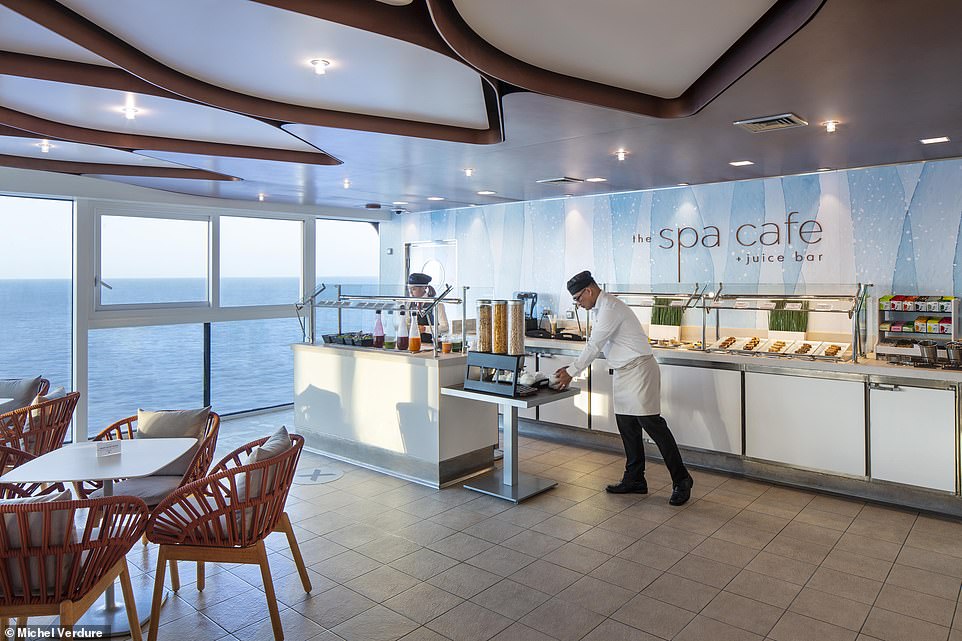 ‘Boy, did we eat,’ Rachel says of her dining experiences on the ship. Above is the Spa Cafe & Juice Bar 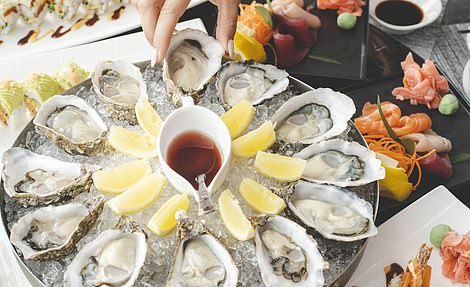 In terms of dining, Rachel said ‘such was the choice’ she made it her aim to try as many different things as she could. Pictured, a serving of oysters at concept restaurant Raw on 5

So what did we do in this hedonistic wonderland?

Well, we spent a lot of time in our stateroom. What a waste, you might think. But we had a veranda with sunloungers and an ever-changing view as we sailed between Greek islands. The decor was calming, in tasteful greys designed by Kelly Hoppen – which I found therapeutically dull after the opulence throughout the ship. The bath was as wide as a paddling pool. The robes sumptuous. And get this: free room service. After all the incredible things I saw, tasted, experienced on board, the fact that you could order breakfast or a burger and not pay extra is still the bit I can’t get over.

Next, we roamed. We easily achieved our 10,000 daily steps just walking around the ship. It’s not as if all of the excitement is concentrated on a couple of decks: there is something to astound at every turn. There are 4,000 pieces of art, including Picasso ceramics.

We easily achieved our 10,000 daily steps just walking around the ship. It’s not as if all of the excitement is concentrated on a couple of decks: there is something to astound at every turn

And then we ate. Boy, did we eat. The Ocean View cafe was our favourite when we couldn’t decide what to go for – because they had cuisine from all around the world. The cafe is buffet-style, with endless stations serving everything from biryani to souvlaki.

Such was the choice – and our determination to try as many different things as we could – that we ate the strangest meals. On our first breakfast I sat down to a full plate containing beef hash, a blueberry and cheese pancake, steamed spinach, congee, half a grapefruit and prune juice.

There are four main restaurants where most guests are welcome to eat as part of the package. They all serve the same food alongside their own specials. We loved the breakfast tortilla the size of a large doorstopper served at Cyprus. Cosmopolitan, Tuscan, and Normandie were equally welcoming.

On top of these, there are several concept restaurants, including Raw on 5 for seafood, Fine Cut Steakhouse for, yes, steaks, and Eden with an imaginative sampling menu. These options are included or incurred a supplement depending on which package you have booked.

As we were staying in a suite, our package included dining at Luminae, where waiters soon knew our names and we theirs. We dined on lobster, filet mignon, scallops – all the finest ingredients, sublimely honoured. 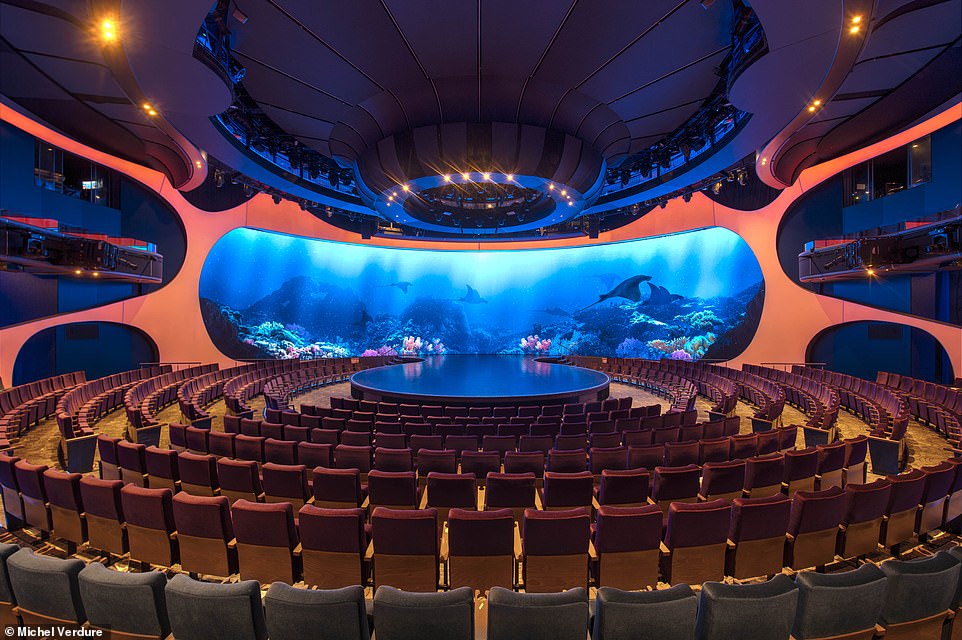 In the evenings, Rachel and her mother sampled two of the three stage shows at the theatre 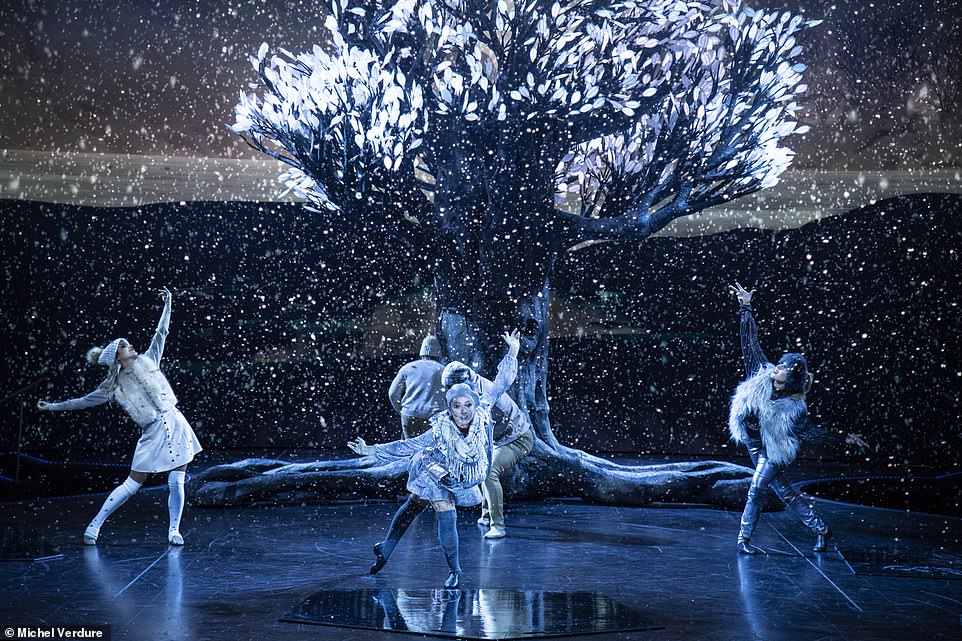 Rachel said of the Tree Of Life show (above): ‘The 20ft-tall tree with more than 3,000 LED-illuminated leaves used to set the stage was about the most accurate creation of nature as artifice as I’ve ever seen’ 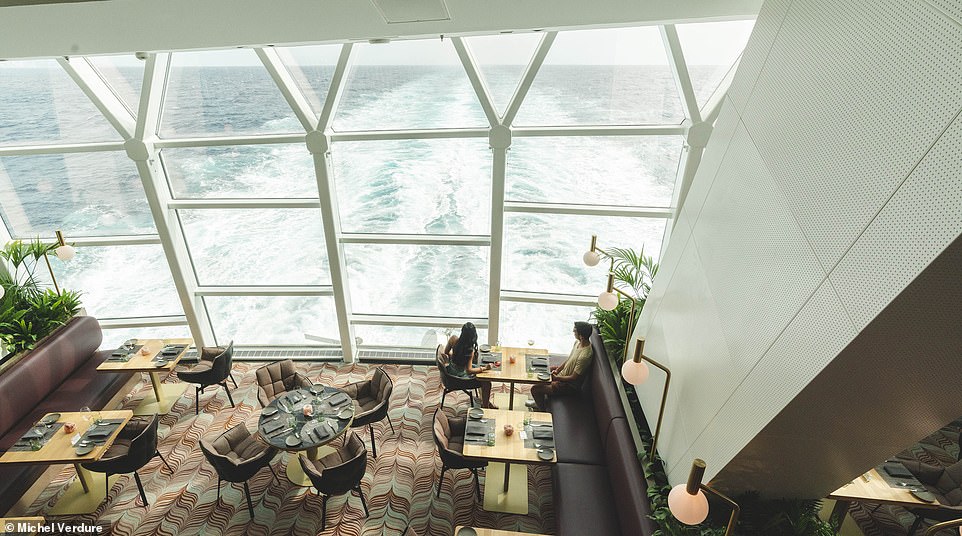 A shot of the ship’s Eden restaurant, which Rachel said offered an ‘imaginative sampling menu’

In the evenings, we sampled two of the three stage shows at the theatre: Tree Of Life and Rockumentary. Both feature singer-dancers performing popular songs against the backdrop of a 28ft-tall state-of-the-art screen. The 20ft-tall tree with more than 3,000 LED-illuminated leaves used to set the stage for Tree of Life was about the most accurate creation of nature as artifice as I’ve ever seen.

Meanwhile The Cabaret was an acrobatic feast, with performers standing on each other’s heads, hands, shoulders and various other bits. Impressive at the best of times; extraordinary when you think they were balancing on a moving ship.

The service was thoughtful and attentive. When I phoned from our cabin one day to order a cup of coffee for my mum, I was asked: ‘But Rachel, don’t you want a cup of tea as well?’ Clearly they got to know my habits.

The cleanliness was flawless. We challenged ourselves to find something scuffed, spilt or broken and it took three days before my mum pointed triumphantly at a tiny puddle on an elegant, polished wooden staircase and exclaimed, ‘Look, Rachel! A spillage!’

And what about the trips? We docked at Dubrovnik, Mykonos, Santorini and Rhodes and enjoyed day trips at each. For someone wanting to immerse themselves, the whistlestop nature is of course insubstantial. But, if you want a tasting menu of Greek islands, this is perfect.

You can see several places without having to pack and unpack – a good way to sample a few and decide where you may want to return to for longer. 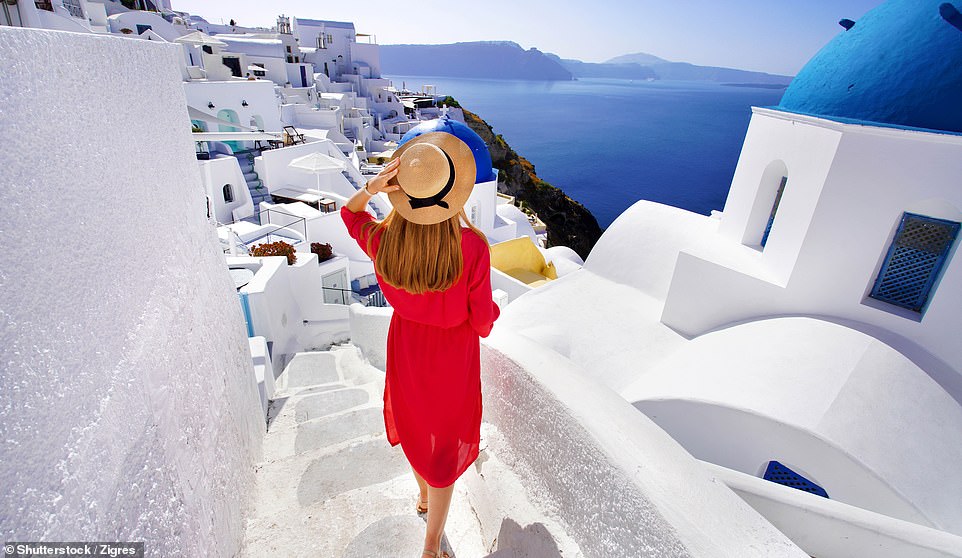 View to thrill: The breathtaking panorama from the famous white villas of Santorini. Other Greek islands on the itinerary included Mykonos and Rhodes (stock image) 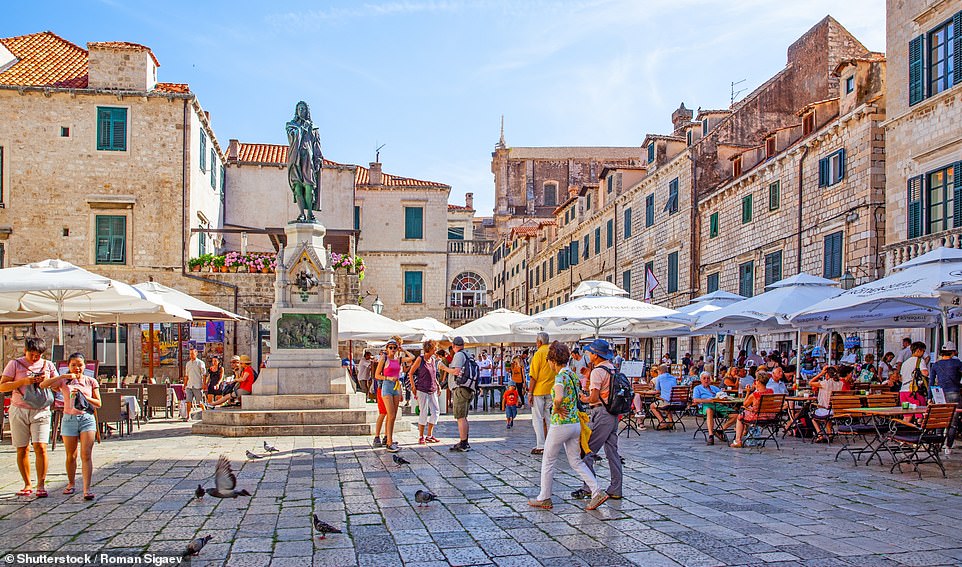 During her cruise, Rachel also got to visit Croatia, with the ship docking in Dubrovnik (above, stock image)

And while I think of myself as an easy-going traveller, happy with local buses and schlepping around, I have to confess there is something nice about returning at the end of a hot, sweaty day to be greeted with a frozen flannel to cool down with and lemon-flavoured water.

So I loved it, right? Well, my senses delighted while my soul ached. The ship is new and one of the most environmentally friendly around. They use a special technology to blow air underneath the hull to reduce friction with the water and improve efficiency by two per cent. They’ve banned single-use plastics on board.

But for all its efforts this is an industry that surely can never be at harmony with the planet. As we dined and caroused, the forests around nearby Athens were ablaze. Ash would sometimes land on the deck as a horrific reminder.

The ship seems committed to lowering its carbon footprint – but its dedication to sumptuousness will always trump. The lobster is from Maine – because that is the tastiest lobster. The beef travels thousands of miles from Texas and the lamb even further from New Zealand. They tried sourcing it locally, but reverted because it just didn’t taste as good.

On the last night, we boogied away at the silent disco at the Grand Plaza. Each dancer was given headphones with three different channels of music to listen to. Shut off from the outside world, we could shake, strut and shimmy with abandon – free cocktails in hand.

Only the gentle rock of the boat served as a gentle reminder of the far more impressive surrounds around us.

Rachel Rickard Straus was a guest of Celebrity. Join Celebrity Apex on a seven-night cruise from Fort Lauderdale to San Juan, Tortola and St Kitts on April 8, 2023, for £685.50pp. An all-included package (drinks, wi-fi and gratuities) costs £35pp extra per day.