EXPRESS INFORMER > News & Politics > A day in the life of a cruise entertainer, what a typical 24 hours looks like

A performer who works on a cruise ship has revealed what life is really like on-board – from waking up to sea-views to singing four nights a week to crowds from around the world.

Rachael Hudson, from Ramsbottom, Manchester, is currently playing Pixel in The Effectors II: Crash ‘n’ Burn onboard Royal Caribbean’s Wonder Of the Seas.

The singer revealed what a typically day looks like for her at sea and admitted she has to start her day with a cup of Yorkshire tea because ‘home comforts are so important when you are away.’

The star performs four nights a week during the cruise, alongside other duties such as fire drill and safety related roles, but she still manages to get off and explore new destinations at ports.

She told FEMAIL: ‘What other job allows you to tick so many boxes? Travel, do what you love and earn money, all while making some very special memories and friends along the way.’

Rachael Hudson, from Ramsbottom, Manchester, is an entertainer on the worlds largest cruise ship Wonder Of The Seas

On most days Rachael wakes at 8am and starts her morning with a cup of Yorkshire tea.

She said: ‘Home comforts are so important when you are away from home! I always make sure I bring plenty of tea bags to keep me going and get any of my visitors to keep me stocked up.’

She explained: ‘Show days are the busiest and start with a tech run to make sure all the technical aspects of the show are working correctly.

‘It’s always a good way to get the brain in gear for a show day and get the voice warmed up too.’ 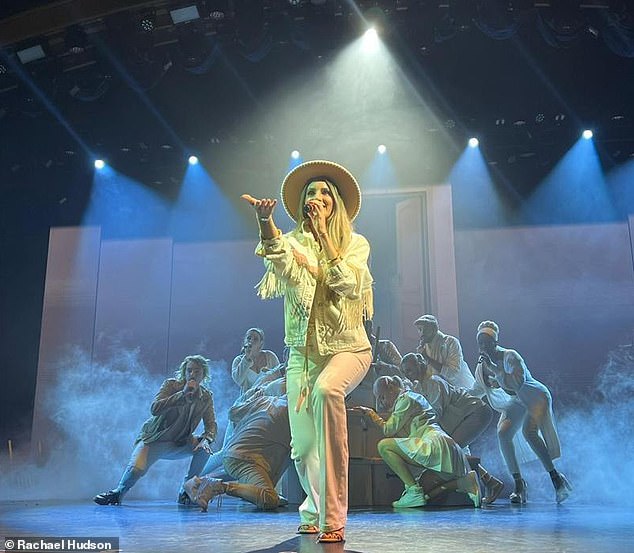 When Rachael joined a girl band at the age of just 13 she could have only dreamt that her passion for performing would see her debut as a solo singer onboard the world’s largest ship years later (pictured, on board) 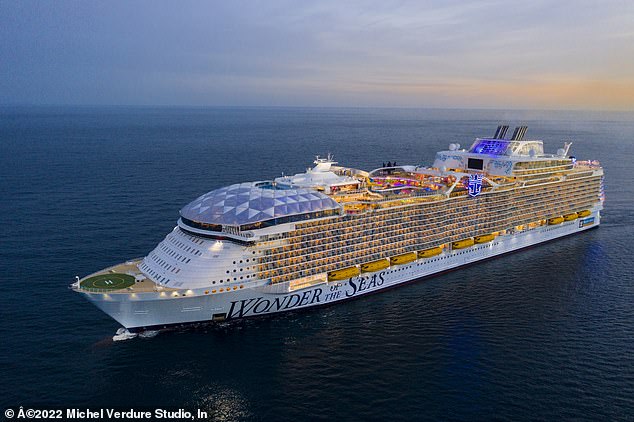 The huge cruise ship has over 2,000 international crew and nearly 7,000 guests onboard with 17 restaurants and 19 swimming pools

The area hosts over 10,000 living plants and flowers with plenty of café’s and restaurants to choose from.

The singer said: ‘This is one of my favourite places on the ship – you sometimes forget you are at sea.

‘If I have time to get off the ship to explore I will but I do like to save my time to travel when I don’t have shows so I can relax and fully enjoy the places we’re visiting. 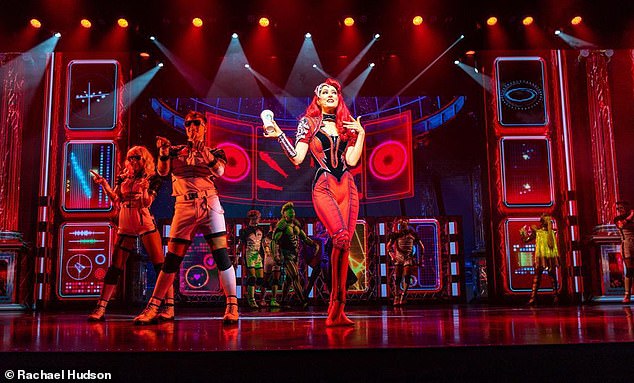 The performer is currently playing Pixel in The Effectors II: Crash ‘n’ Burn onboard Royal Caribbean’s Wonder of the Seas 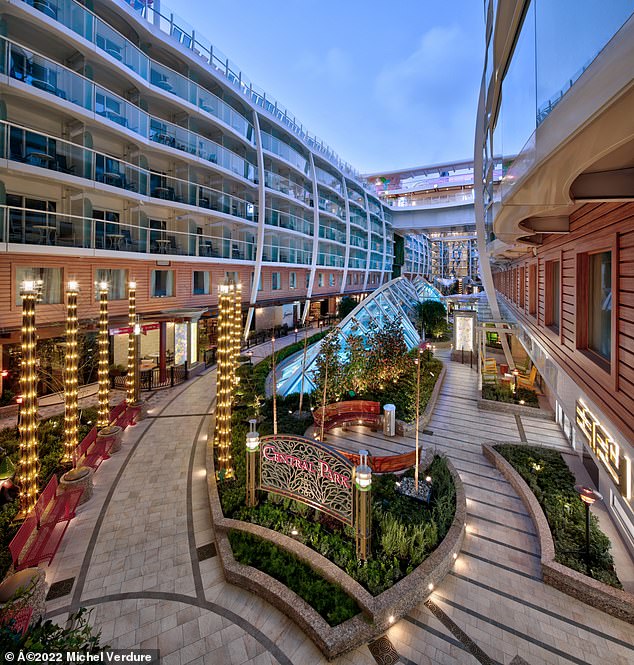 Central Park hosts over 10,000 living plants and flowers with plenty of café’s and restaurants to choose from

‘Our current itinerary visits Naples and Capri every week and I have found many hidden gems for Italian coffee and pizza, usually accompanied with a limoncello spritz, (on a non-show day of course!)’

After lunch Rachael enjoys some ‘me time’ and likes to do circuits on the walking track onboard whilst listening to a podcast or audiobook.

‘On a non-show day, I will often lay out and catch some rays too,’ she added.

From 5pm she starts to prep for her evening show which includes doing ‘a vocal warm up’ and a ‘little boogie.’

She said: ‘Show preparation time includes showering, doing my makeup and getting my superhero mode engaged for my current role! 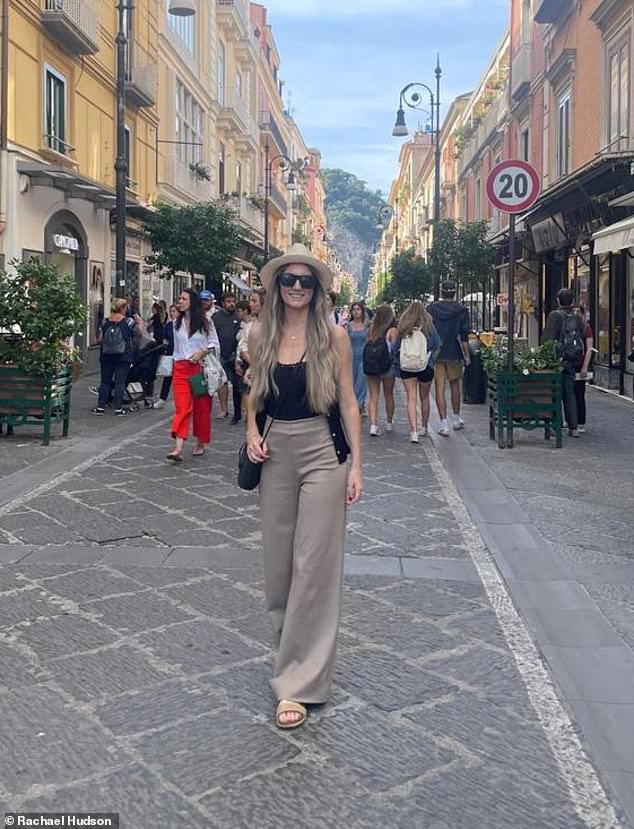 ‘I always do a vocal warm up while I’m doing my make up in my room, and sometimes a little boogie.’

At 6:30pm she heads to the theatre for a sound check and gets into her costume.

Saying: ‘I love the backstage vibe before a show, it’s one of my favourite parts of the day.

‘Everyone’s energy is buzzing, and we have a lot of fun while getting ready.’

However the fun doesn’t stop there because once the show is over, the cast head to the crew bar to unwind.

Rachael revealed: ‘After the show we organise our costumes and props for the next day before heading to crew bar. I am a huge fan of a game of pool or cards to chill out after the show and get ready to do it all again.’

The entertainer, who has been working with Royal Caribbean for over 13 years, said: ‘There is no limit – there are so many opportunities to grow, try something new, and challenge myself. 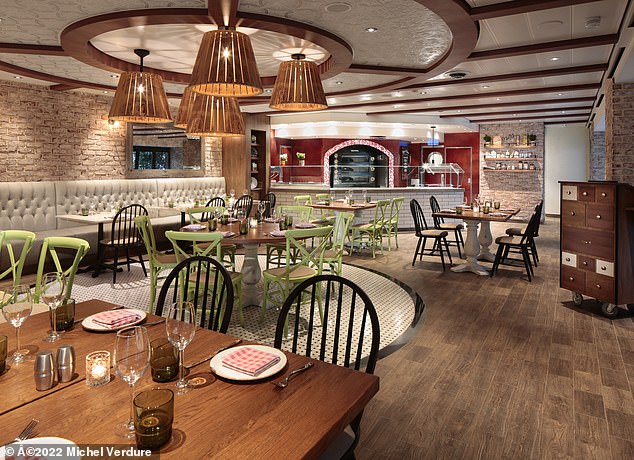 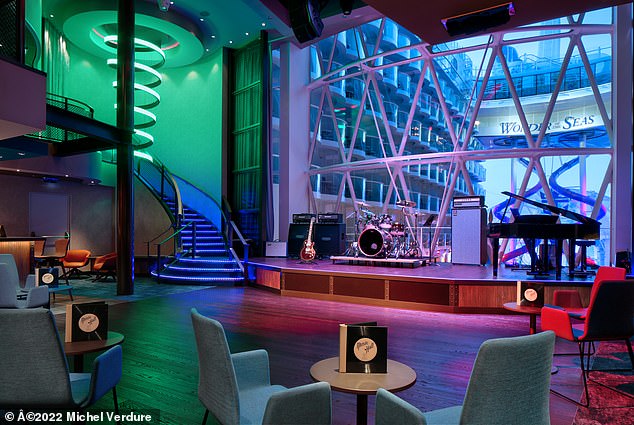 She also loves spending time with the cast in the music hall were people come to dance the night away to live performances by a revolving roster of tribute bands, jazz ensembles and the Royal Caribbean house band

‘I’m constantly learning, while travelling the world and exploring new places. There’s no better feeling than finishing a performance and seeing the crowd’s faces beaming back.’

Speaking about the best parts of working onboard the worlds largest cruise ship Rachael revealed ‘there is nothing better than waking up to the ocean view.’

Saying: ‘I am so privileged to have a rather nice sized port hole, and this has literally made my contract, I’m in the O of Wonder on the side of the ship! The views are like no other.

‘It is pretty crazy to think the world’s largest cruise ship has become my home.

‘A favourite spot for me and the cast is Giovanni’s Wine Bar. I also love the Music Hall – the home of live music onboard the ship.’

Meanwhile she added: ‘I have had a total of 16 guests come to visit me over my nine months onboard which keeps me very busy! 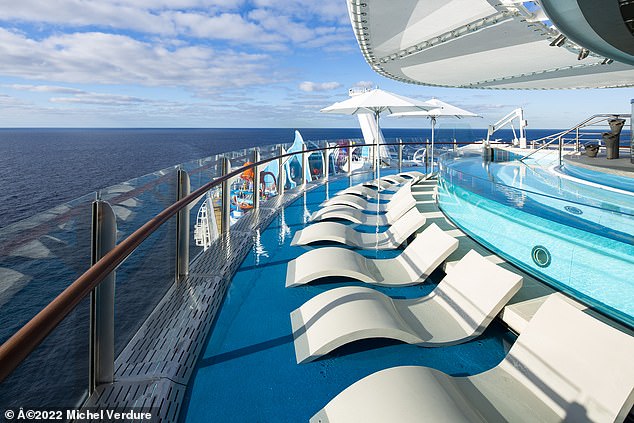 ‘It’s been great to show them around the ship, my world and to have them watch my show and seeing their faces in the audience is really special.’

However, working on a cruise ship can have its downsides as Rachael admitted ‘not seeing family and friends every day’ can be hard.

She admitted: ‘While working onboard is mostly highlights, working away from home for an extended period of time can be hard, especially not seeing family and friends every day.

‘I do also miss everyday things such as driving or cooking so I make sure I do plenty of that when I’m home.

‘When I accept a contract, I am always aware of what’s in store, the highs and the lows but the highs are absolutely worth it which is why I keep coming back!’