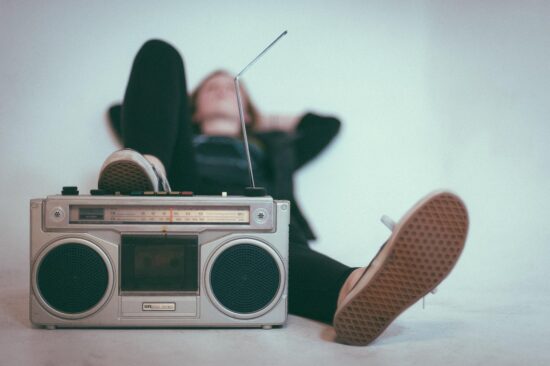 The Covid-19 pandemic put a pin in live performances. However, at the tail end of 2021, we’re finally at a point where artists are returning to the stage, and fans are flocking to arenas and filling out festivals. However, despite the break in live performances, there has still been some incredible progression in the indie space.

There are plenty of budding bands and solo artists ready to take their unique sounds to the stage. If you’re looking for inspiration or an artist to go and see live, you’ve come to the right place. Below, we have collated some upcoming indie artists that you need to listen to.

Hailing from Ohio, Kennyhoopla (birth name Kenneth La’ron), released his first EP way back in May 2020. At just 22 years old, the EP found an immediate fanbase and even piqued the interest of Blink 182’s Travis Barker, who went on to collaborate on his single ESTELLA//.

With such an influential collaboration in place, Kennyhoopla’s sound shifted in the direction of the pop-punk revival. On the back of the success of ESTELLA//, Travis Barker helped this budding indie artist record an entire tape worth of material, which will be bundled into an album called SURVIVORS GUILT.

Despite recording with Barker and hitting chords likened to the pop-punk days of the 2000s, Kennyhoopla wants to break out of this box and make music for the now. Regardless of direction, the future will be bright for this budding indie artist, and you should pop him into your playlist.

If you’re feeling inspired and have a DIY album waiting to come out, you should head down to your local music studio. You can find a Houston recording studio with ease, which will give you access to quality equipment to practice with, and when you’re ready to record, you’ll be in the right place.

Beam is an American songwriter and producer, who entered the scene in 2019 with his EP, 95 – released through Hopeless Records. His track blends reggae, hip-hop, and rap alongside a blend of Jamaican and English influences.

Think about techno and reggae having a baby and you’ll be pleasantly surprised. At the age of 25, Beam has been in the producing game for a staggering 15 years and is fast becoming the go-to producer for artists including 2 Chainz.

Although he hasn’t had that much chance to break onto the stage, thanks to a certain pandemic, this upcoming artist deserves a space on your Spotify playlist.

This South African star is incredible, and her sound is difficult to articulate. However, because we have to have a bash, we’d say that it takes a generous splash of hip-hop and throws it into an experimental blender that pulls in a cheeky dash of moody neo-soul.

If you check out her first single “Disgusting”, you will see that she touches base across a range of genres and creates genius lyrics to keep you invested in the sound. What’s more is that she has full control of her music, which makes her free to go wild with creative talent.

If your bag is a joyful sound of guitars mixed up with solid choruses and swag reminiscent of Jamie T, you will love Easy Life. At first look, the band appears to be your generic group of parka boys trying too hard to make some music.

However, if you scratch beneath the surface, you’ll see that the Leicester-based quartet is far from your generic boyband. Their song titles include “Sangria”, which is an awesome blend of funk crossed with slowed reverb, which makes for an interesting mix.

Essentially, their sound takes East Midland accents and mashes them together with sounds from the LA jazz scene. If you don’t have these boys in your playlist, you’re doing something wrong.

With a name like Bananagun, you know you’re in for a quirky treat. The band looks eccentric, but don’t let that put you off placing them onto your Spotify playlist. Their sound brings the energy of The Kinks and blasts it into the present day.

Back in 2020, their first album “The True Story of Bananagun” hit the stores and bought a fun, funky sound. Essentially, if you like fun, you’ll love this Australian quintet.

Arlo Parks is only 21 years old and is already cementing herself as a Gen-Z icon thanks to her unique sound including “Super Sad Generation” and “Black Dog”.

The young star is signed to Transgressive Records, which is home to the legendary Two Door Cinema Club. As well as making significant strides in music, she has become a leading ambassador for the mental health organization Calm.

With a debut album releasing in 2021, this up-and-coming artist has a budding future to look forward to.

If you enjoy sad songs that make you think about sad events, then you’ll love Celeste. She brings an incredible voice to her work and has an amazing cinematic vision when it comes to provoking emotions. She has made impressive strides already and was able to collect the BBC Music’s Sound of 2020 award.

Despite a sad and gloomy start, it’s said that her up-and-coming work will allow listeners to get a glimpse into a more upbeat sound. No matter how you spin it, this artist deserves a spot on anyone’s playlist, and will surely have an incredible future.

The music industry was brought to a sudden halt when the global pandemic hit, with festivals and touring artists being forced to postpone for the best part of a year and a half. Although this was problematic, it paved the way for budding artists to create music and get their sound out into the world.

Now, as the world starts to open up, the artists mentioned above will hit the stage bringing their unique sounds. If you aren’t already rocking out to the likes of Kennyhoopla and Bananagun, you’re doing something wrong.