Channel 9 paid $120,000 to a child recovery agency whose operators were detained along with reporter Tara Brown and crew who were filming an operation in an international custody case in the Lebanese capital of Beirut.

Daily Mail Australia has learned that the man leading the operation to recover the six-year-old daughter and four-year-old son of Australian woman Sally Faulkner from the Beirut family of the children’s father Ali El Alamine was arrested two years ago in Singapore.

Former British police officer Adam Whittington, who runs Child Abduction Recovery International (CARI) and who is reportedly under police arrest in Beirut along with 60 Minutes’ Tara Brown and her crew, was jailed in Singapore 18 months ago over a child abduction case.

Whittington’s CARI agency also boasts on its Facebook page alongside a photograph of a woman and child in a helicopter which is claims to be a successful 2013 CARI child recovery operation in the Philippines.

The photograph is actually a 2006 Oregon, US police rescue of a mother who became lost with her daughters on a remote snowy mountain and had to be helicoptered out.

Another claimed CARI operative, Kevin Critchley, is currently in a Peruvian prison following the alleged kidnap of a five-year-old girl in Lima last month. The girl’s father was also arrested.

However Whittington denies CARI has even been associated with Critchley.

‘CARI has never worked with Kevin Critchley, nor was CARI involved in any way with the recovery in Peru.

‘We have court documents that were sent to us from Peru where the verdict states that CARI was in no way found to be involved with this recovery.

‘It has been proven in the Peruvian courts that this operative has no association with CARI,’ Whittington asserts regarding the Peru recovery and Critchley.

Child Abduction Recovery International (CARI) agency boss Adam Whittington (pictured) has reportedly been arrested, not for the first time, in Beirut along with a 60 Minutes crew after CARI took two Australian women from their Lebanese grandmother at a bus stop 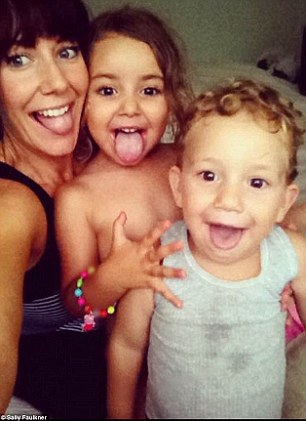 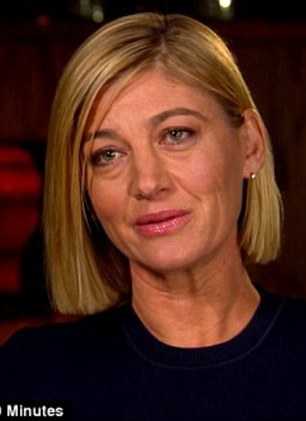 The CARI operatives, acting on behalf of Sally Faulkner (pictured, left with children Lahela, 6, and Noah El Amine, 3) grabbed the children from a Beirut bus stop on Wednesday while Tara Brown (above, right) and her crew filmed the operation after which they were arrested but Ms Faulkner and her children are safe 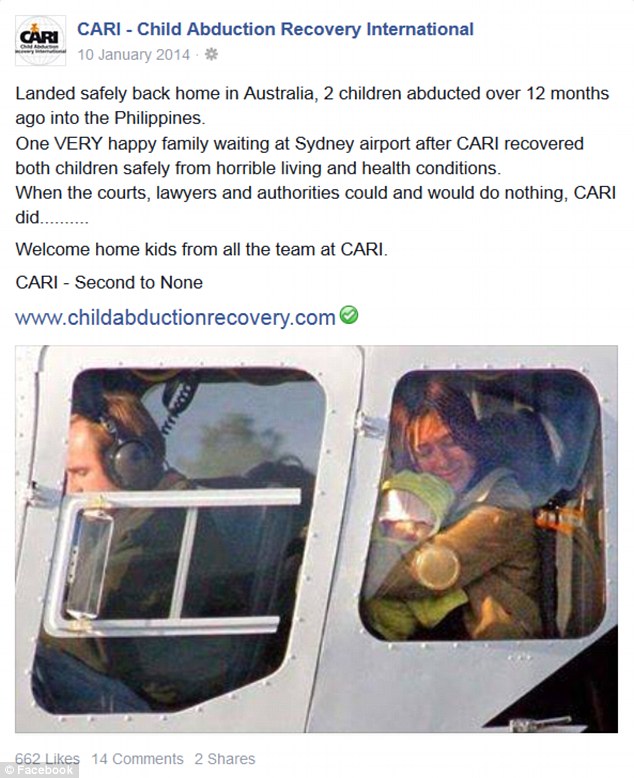 The child rescue agency CARI arrested in Beirut with Tara Brown has this photograph on its Facebook page boasting that it is a successful 2013 CARI child recovery in the Philippines, when it is in fact it’s a US police rescue from 2006 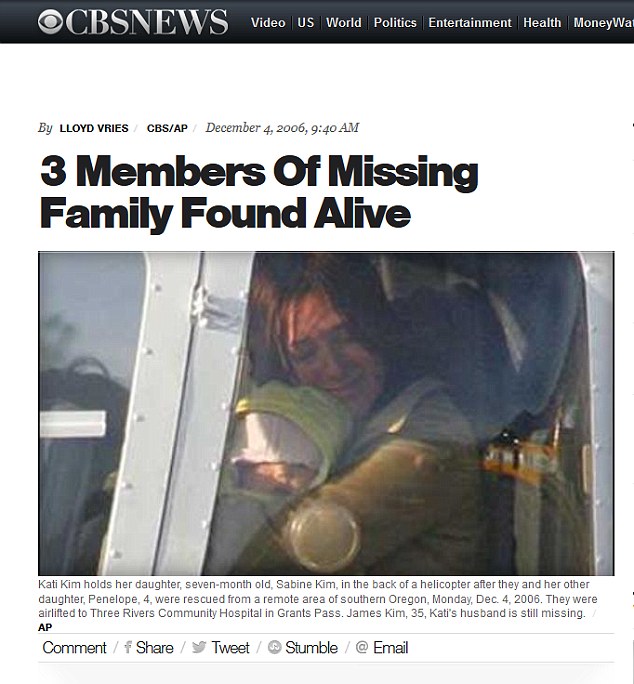 Real: CBS News covered the story in 2006 when the woman, San Francisco mother Kati Kim had to be rescued from a remote Oregon mountain in winter by police after the family became lost in the snow

Daily Mail Australia understands that the mother in the Beirut case, Sally Faulkner, who is also known as Sally Clafinger, is not in custody with the 60 Minutes crew or the CARI operatives including Mr Whittington.

Ms Faulkner is believed to be have been taken to a safe house with her children, Lahela, 6, and Noah El Amine, 3.

But there are fears for the welfare of Ms Brown and her crew if local reports that the operation involved violence and weapons proved to be true.

Lebanese television station An-Nahar has reported the ‘recovery’ operation of Ms Faulkner’s children as a ‘kidnap’ by ‘four gunman’ driving a silver Hyundai and ‘abducting’ the boy and girl from their grandmother as they waited for the school bus.

Channel 9 released footage of the rescue operation on Thursday in which no weapons are visible. Although the operatives are seen shoving people out of the way to get the children.

The 60 Minutes crew was in a car filming the recovery of Ms Faulkner’s children who is now in hiding with her young son and daughter.

The children’s father Ali El Amine and Ms Faulkner separated more than a year ago and Mr El Alamine flew to Lebanon with the children for a ‘holiday’ but failed to return them, telling his ex-wife via Skype that she ‘would never see them again’. 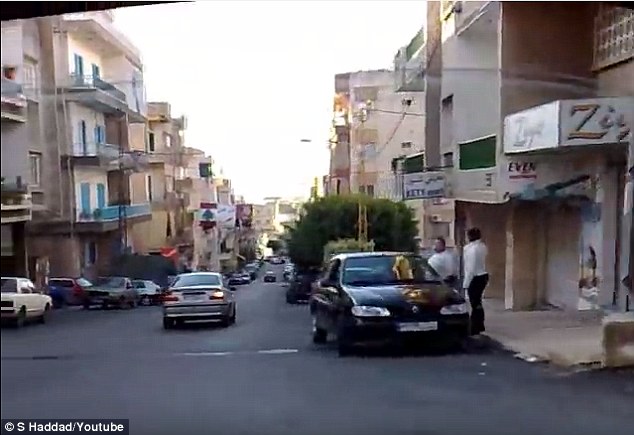 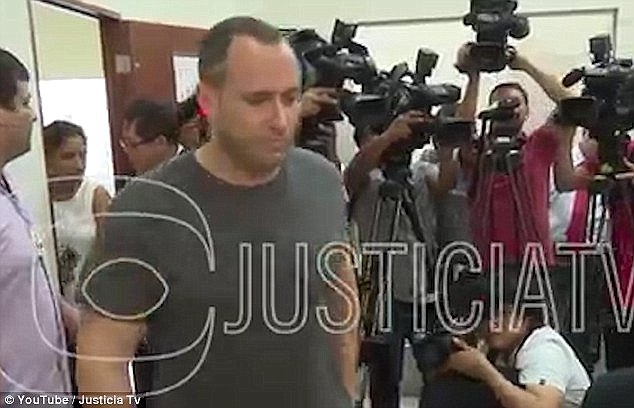 Alleged CARI child recovery commando Kevin Critchley (pictured) was arrested in Peru last month after being detained over an ‘international kidnap plot’ to take the five-year-old daughter of Peruvian selfie queen Rose Chacón. But CARI denies they were ever associated with him 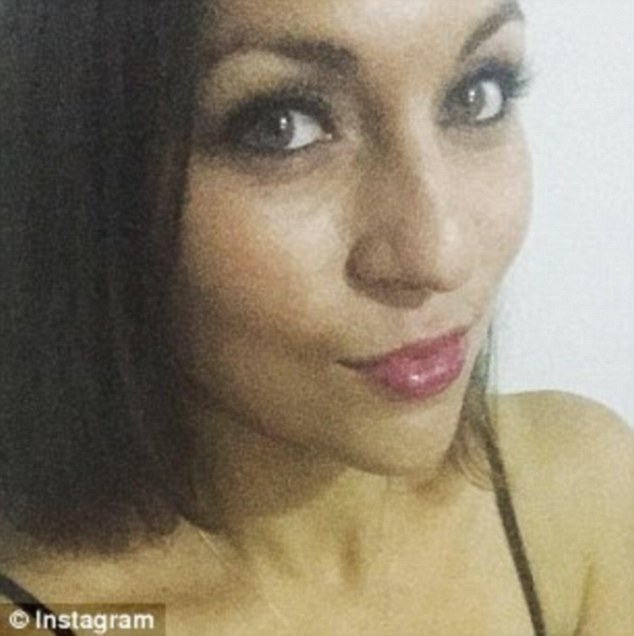 Peruvian selfie queen Rose Chacón (pictured) took the girl Adrianna, 5, back to her native Peru from America claiming her husband had ‘inappropriately touched’ their daughter, but she was reported to have hired a CARI commando for $280,000 to recover the girl. However, CARI denies the claim

Ms Faulkner flew to Beirut to meet up with the CARI team, with Channel Nine’s 60 Minutes paying the $120,000 bill for her children’s recovery.

After taking the children from their grandmother at the bus stop, the CARI team handed them over to Ms Faulkner and she allegedly telephoned Mr El Amine and informed him that the children were with her.

Mr El Amine is reported to have then informed police that his children had been abducted and he was concerned they would be taken out of the country and to Australia.

It is unclear as to who has made claims that there were weapons used in the operation and that Mr El Amine’s mother was pistol whipped.

International child abduction recovery specialists CARI reportedly charged 60 Minutes $120,000 to recover the EL Amine children, but were arrested along with Tara Brown and her crew

All those detained were still in police custody on Thursday morning as Beirut officers investigated the validity of reports that weapons were used and an assault had taken place.

The Nine Network told Daily Mail Australia they were not commenting on the incident other than they were concerned for the welfare of Brown and her crew and were ‘working with authorities to get them released and back home as soon as possible’.

Adam Whittington and his firm CARI have made several controversial child recovery operations previously and the agency has made claims they had up to ten former SAS soldiers on their books.

Last month, Peruvian police arrested alleged CARI operator Kevin Critchley after it was reported he was paid $280,000 to intervene in the custody battle between a Peruvian selfie queen and her American husband. 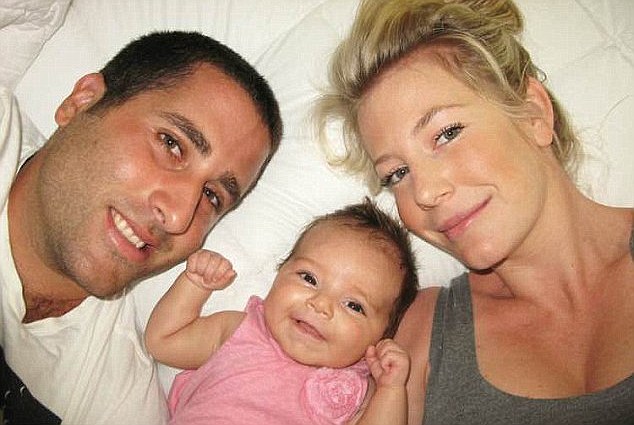 Sally Faulkner, pictured with her ex-husband Ali El Amine with their child in happier times, hired a child recovery agency to retrieve her children from Beirut and they are now in hiding with the operatives and 60 Minutes in police custody 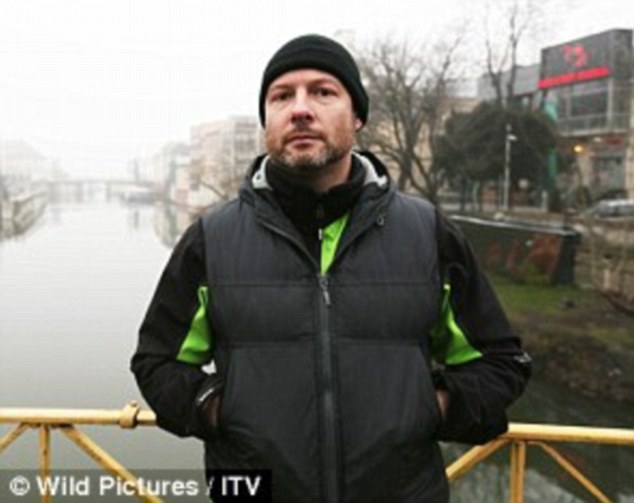 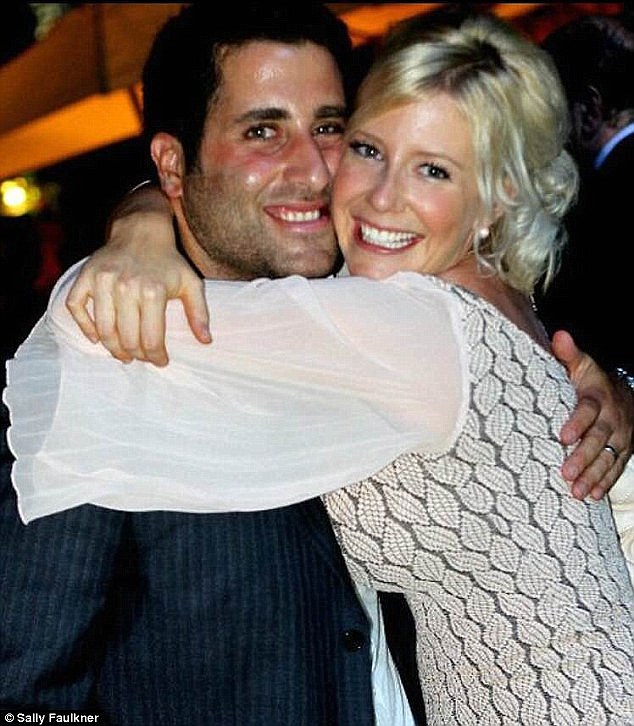 Sally Faulkner, pictured with her ex-husband Ali El Amine, now has to make her way out of Lebanon with her two children following the operation which led to Lebanese police arresting reporter Tara Brown

Critchley, 35, reportedly a former British commando, is in custody with Dustin Kent in a Lima prison after they allegedly plotted to snatch back Mr Kent’s five-year-old daughter Adrianna from the girl’s mother, Rose Chacón.

The men are being held for allegedly being part of an ‘international kidnap plot’ to take back Adrianna, after Ms Chacón took the girl to her native Peru from America claiming her husband had ‘inappropriately touched’ their daughter.

Mr Critchley, a self-employed ‘close protection operative and freelance surveillance operator’, was believed to have been working for CARI on the operation.

However, CARI’s head, Adam Whittington, claims CARI has never been associated with Critchley.

In September 2014, the London Telegraph reported that CARI’s chief operator Adam Whittington was jailed in Singapore after a foiled attempt to snatch a two-year-old boy back on behalf of his mother.

The boy’s London-based mother, 30, was also sent to prison. The mother had been in the process of divorcing her husband and had gained UK custody of the child, but her ex-partner took out a Singaporean order preventing his son’s removal from the country.

Whittington reportedly chartered a catamaran, then hired a taxi and went to the boy’s grandparents’ house where he allegedly put the grandfather in a headlock.

Whittington, the mother and another man involved in the elaborate plot were arrested the following day.

He was sentenced to 16 weeks prison for criminal assault, voluntarily causing hurt and illegal entry into Singapore.

CARI’s Facebook site features a photograph of a woman in a rescue helicopter clutching an infant on her lap.

The caption written beside it says ‘Landed safely back home in Australia, 2 children abducted over 12 months ago into the Philippines. One VERY happy family waiting at Sydney airport after CARI recovered both children safely from horrible living and health conditions.

‘When the courts, lawyers and authorities could and would do nothing, CARI did.’

The photo is actually a picture of San Francisco mother Kati Kim, 30, who in December 2006, CBS News reported, was photographed with her seven-month old, Sabine Kim, after they were rescued by police in Oregon.

James Kim set out to look for help when the family became stranded and was never found. Police airlifted a relieved Ms Kim and her daughters from the scene in a helicopter to the nearest hospital where they were reported to be in ‘good’ condition.

On its Facebook post beside the photograph of Ms Kim and her daughter, CARI wrote ‘Welcome home kids from all the team at CARI. CARI – Second to None’.

However, Mr Whittington has strongly denied that the post was faked, explaining that ‘stock images’ have been used in some CARI posts, in order to protect the identity of real children recovered.

The CARI head claims parents of children recovered have requested that no images of them be used on any online platform, to protect their identities on occasion.

‘Every single recovery featured on the CARI Facebook page is genuine and the images are posted with the express consent of the parents,’ says Whittington.