EXPRESS INFORMER > News & Politics > £6.4bn Navy aircraft carriers ‘won’t be able to do their job’ because of penny-pinching, MPs say

£6.4bn Navy aircraft carriers ‘won’t be able to do their job’ because of penny-pinching, MPs say

By Larisa Brown Defence And Security Editor For The Daily Mail

The Royal Navy’s £6.4billion aircraft carriers may not be able to do their job because of Government indecision, penny pinching and a lack of support vessels, MPs claim.

The Commons public spending watchdog accused ministers of a ‘debilitating lack of clarity’ about what they want HMS Queen Elizabeth and HMS Prince of Wales to achieve.

In a scathing report, MPs also warned there is a ‘disturbing’ lack of information about the costs associated with the F-35 Lightning II jets that are meant to fly off them.

Problems with the ships’ Crowsnest radar system will leave them with ‘less protection than planned’, there is a lack of support vessels to supply the carriers, and uncertainty on how many Lightning II jets will now be needed, the report added.

The public accounts committee warned that the Ministry of Defence’s ‘failure to fund several key supporting capabilities will restrict how it can use the carriers for many years’.

Committee chairman Meg Hillier said: ‘As things stand the UK has two world-class aircraft carriers with limited capability because the wider debate about the UK’s strategic defence capability – and funding – has been repeatedly delayed.’

She added: ‘The MoD and the nation it’s responsible for defending cannot afford for this rare beacon of success in delivering the two carriers to descend into yet another failure to deliver defence capability. 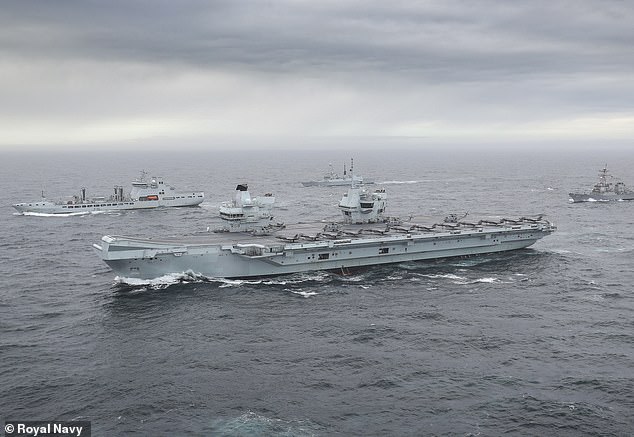 ‘The MoD must recognise that is a real risk, a real risk to a vital part of our national defences, and it must demonstrate now a clear plan to capitalise on the massive investment the UK has already made.’

The MoD said getting the so-called ‘carrier strike group’ ready was a complex challenge but it was ‘committed to investing in this capability’.

A spokesman added: ‘Despite the disruptions of Covid-19, the carrier strike group is on track for its first operational deployment in 2021.’