By Eleanor Harding Education Editor For The Daily Mail

A Cambridge college will offer the UK’s most generous bursary scheme – with 40 disadvantaged students getting the equivalent of £51,000 each.

The students at St John’s will get full tuition and living expenses for three years, meaning they will graduate debt-free.

The college, which is one of Cambridge’s wealthiest, aims to rival the lavish financial aid handed out to students by Ivy League universities in the US.

Applicants to the St John’s scheme – planned to start in 2023 – must have a household income of below £16,200. Eligible students will be able to access more than £17,000 of financial support for every academic year.

St John’s College (pictured above), which is one of Cambridge’s wealthiest, aims to rival the lavish financial aid handed out to students by Ivy League universities in the US

Heather Hancock, college master, said: ‘It is still true that high-potential pupils from low-income families and young people leaving care are deciding against university because of the prospect of significant debt. We want to take away that anxiety.’

The scheme has been launched after an anonymous foundation made a £14million pledge to its fundraising campaign.

It comes as the most selective universities are under increased pressure to improve access to higher education for those from disadvantaged backgrounds.

Hancock added: ‘For more than 500 years, St John’s College has had an unwavering commitment to provide financial support for students in need.

‘We are determined to sustain this legacy.

‘Removing serious financial barriers for prospective students is a powerful signal that Cambridge really is for everyone.’

St John’s has also appointed one of its academics to forge links with schools in the north of England to support students who may never have previously contemplated applying to Cambridge.

St John’s is thought to be the second wealthiest Cambridge college with assets of about £780million. 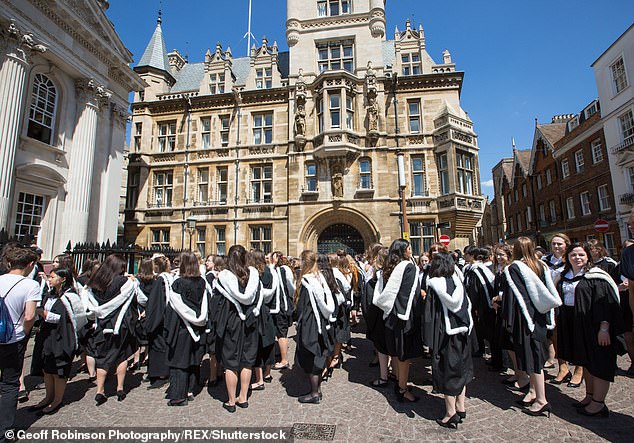 The students at St John’s will get full tuition and living expenses for three years, meaning they will graduate debt-free (file photo of Cambridge University students graduating in 2018)

The bursary is thought to be the UK’s most generous.

Scholarships from the grime star Stormzy offer a similar amount, but these only pay for two students a year at Cambridge.

Last week, the University of Cambridge’s annual admissions statistics confirmed that Cambridge accepted a record proportion of state school pupils – 70.6 per cent – last year, up from 68.7 per cent.

A scheme run by the Fulbright Commission and the Sutton Trust has secured places at US universities for more than 400 British school leavers in recent years.

Each year they have been awarded millions of pounds worth of financial aid.