Target: Alison Rose leads NatWest, which would be hardest hit by a tax raid

High street banks are facing the prospect of demands for billions of pounds more tax as they unveil bumper profits this week.

The lenders are a tempting target for Chancellor Jeremy Hunt, who is under pressure to fill a £40billion hole in the public finances.

Banks are in line for up to £90billion of interest payments over the next two years on deposits of around £900million they hold at the Bank of England. As The Mail on Sunday reported earlier this month, lenders are steeling themselves for the Treasury to block part of these payments, in what would amount to a windfall tax.

Political turmoil means it is not certain that Hunt will remain long at Number 11, but whoever is Chancellor is likely to find a tax grab on banks hard to resist.

Sir Paul Tucker, a former deputy governor at the Old Lady, has proposed the move to help balance Britain’s books. Separately, Hunt may decide to keep a tax surcharge slapped on the banks in 2015 as a punishment for their reckless behaviour leading up to the financial crisis.

The big lenders are forecast to make £32billion between them this year, slightly more than in 2021, according to research by JPMorgan. Profits on this scale will raise eyebrows with millions of customers struggling in the cost-of-living crisis.

HSBC, Lloyds, Barclays and NatWest are due to issue their third quarter results this week. They have gained from higher interest rates but stand accused of failing to pass on the benefits to savers, who continue to receive miserly returns.

NatWest, led by chief executive Alison Rose, would be hit hardest by a windfall raid, according to analysts at Barclays. NatWest holds £148billion at the Bank of England, while HSBC has £89billion and Lloyds £79billion. These reserves have largely been accrued under the Bank of England’s money-printing, known as quantitative easing.

As the base rate rises, interest due to be handed to banks is set to balloon, representing a large windfall gain. The Institute for Fiscal Studies has proposed part of this be withheld. That could save the public purse between £30billion and £45billion in each of the next two financial years, according to Tucker.

Barclays estimates the reserves have ballooned by £160billion in the past three years, with NatWest accounting for half that rise. Hunt has said he is not opposed to windfall taxes in principle.

The banks had been hoping to pay less tax, not more. They had anticipated a cut in the tax surcharge but, following a series of U-turns by successive Chancellors, this may not happen.

Rishi Sunak had promised to cut the levy from 8 to 3 per cent, on top of corporation tax of 25 per cent, resulting in a 28 per cent tax rate on banks. 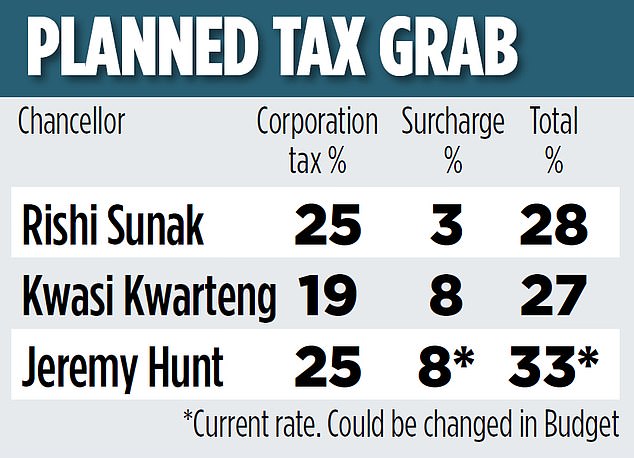 While there may be little sympathy for lenders, experts warn that hammering them with high taxes may have consequences. Banks are likely to face losses on bad loans as customers fall into hardship in the economic crisis.

A report by financial data firm Bloomberg says raising taxes on banks could lead them to pull back on lending, which in turn could hurt the already weak economy.

David Postings, chief executive of trade body UK Finance, said: ‘We urge the Government to consider the surcharge very carefully and not put at risk the competitiveness of the UK’s banking and finance industry, which is the engine of the economy, providing jobs and investment up and down the country.’

Markets are betting the cost of borrowing could go up by as much as a full percentage point in early November to 3.25 per cent, swelling the interest banks make on their reserves even further.